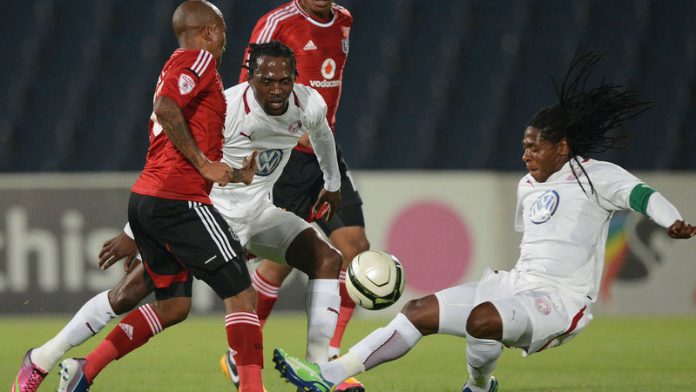 The Buccaneers hit the ground running at the Dobsonville Stadium on Tuesday night and launched an attack in the first minute, which saw Takesure Chinyama sending Sifiso Myeni through.

The midfielder showed great composure as he let go a grass-cutter, which gave Swallows' goalie Greg Etafia no chance in goal for the hosts.

Pirates could have doubled their lead in the fourth minute when Daine Klate sent in an inviting cross, which unfortunately found no player, allowing Etafia to collect it.

Swallows' best chance fell to Katlego Mashego in the 18th minute, Siyabonga Nomvete worked his way through on the left wing and floated a beautiful cross that Mashego miscued in front of goal, which Thabo Matlaba cleared.

Etafia was forced to make a save in the 24th minute, tipping over the bar a Klate pile driver from a freekick just outside the box. Pirates wasted the resultant corner.

In the 31st minute Klate was fouled but the referee waved for advantage, the Birds scrambled the ball away to Myeni who failed to capitalise.

The second goal
Pirates' second goal came from the penalty spot in the 35th minute, Roger da Costa was adjudged to have handled the ball inside the box and Andile Jali made no mistake from the spot kick.

Swallows pulled one back in the 44th minute, Lerato Chabangu's defence-splitting pass found the speedy Dikgang Mabalane who did well to pull the ball back for Mashego who fired home past Senzo Meyiwa to make it 2-1 going into the break.

Pirates carried on from where they left off in the first half and came close to finding their third goal in the 47th minute. Jali's dipping cross found Oupa Manyisa who did well to beat the offside trap, only to miscue his effort in the face of keeper.

In the 60th minute Swallows levelled matters: Mabalane let fly from about 35 yards and the strike beat Meyiwa but bounced off the upright straight to skipper Lefa Tsutsulupa, who buried the chance with a diving header.

Seven minutes later, Mashego turned provider as his cross found Chabangu who headed home to give the Birds the lead.

On top of conceding the goal, Pirates' were dealt another blow when their goalscorer Myeni limped off injured, forcing coach Roger de Sa to throw Tlou Segolela into the fray.

Swallows also lost Chabangu through injury and had to be replaced by Oscar Machapa who did well to provide some steel for the Birds to hold on to for a win.

Their victory saw Swallows soar to 10th position with 22 points, while Pirates missed the chance to topple archrivals Kaizer Chiefs at the the summit of the table ahead of the two giants' clash this weekend. – Sapa