A tale of two bagels 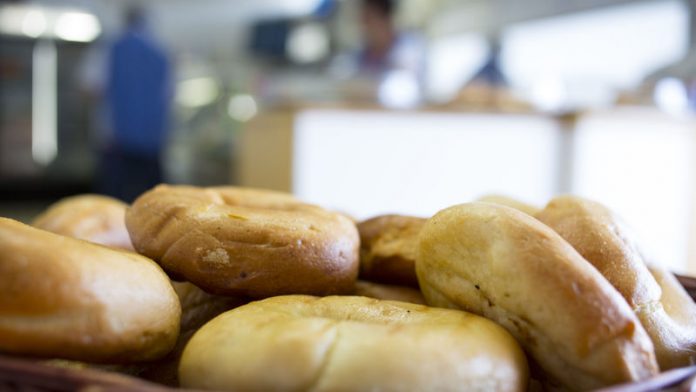 Bagels — invented in Poland, perfected in New York — symbolise life, presumably because of their shape. The ingredients are simple — flour, yeast, sugar, salt, oil, sometimes eggs — but the method is bizarre. They are boiled before they are baked.

Or they should be. Some bagel-makers skip the boiling and steam them instead, which is faster and less labour-intensive.

Bagels, explains Harold McGee in the encyclopaedic McGee on Food & Cooking, are thrown into boiling water to expand the interior and develop a thick crust. A steamed bagel is not a bagel. It is a bun that looks like a doughnut.

If you’re looking for the real thing, there are two small Johannesburg factories that make genuine boiled bagels; they face one another across a huge parking lot grandly named the Lyndhurst Shopping Centre.

Feigel’s Bagels moved to Lyndhurst after decades in Bellevue and Yeoville. It was opened as a deli by the redoubtable Feigel Zaslansky in 1968 and still sends various deli lines, such as blintzes and perogen, to supermarkets.

Brooklyn Bagels is an upstart; founded by Mark Lipman, who invented the original Deli Diner in Killarney, it’s only been around for 15 years. Why bagels?

“I believed bagels were going to be the next best thing here in South Africa,” Lipman says. “They’re very popular and work well.”

For Patsy Dakes, who has run Feigel’s with her brother, Jos Zaslansky, almost from the beginning, “it’s just something we used to love as children. It was a treat.”

All bagels are made with strong gluten flour — hard to find in South Africa — and formed into a very stiff dough. From there they can go in one of two directions: Feigel’s bagels are dense and chewy, with a thick crust; Brooklyn Bagels are lighter.

The two bakeries follow different business models as well. Brooklyn Bagels can be found in supermarkets across Gauteng and, in December, in Plettenberg Bay. Feigel’s sells its bagels only to retail customers and caterers.

Still, Feigel’s turns out an incredible number of bagels. A current order is for 100 dozen.

Feigel’s has always used Feigel Zaslansky’s recipe. They stick to plain and wholewheat bagels, both full size and cocktail size, and sell them both freshly baked and par-baked (or half-baked).

Brooklyn Bagels, which are made without eggs, are all sold par-baked. Lipman doesn’t carry the number of flavours one finds in a bagel shop in New York or Miami, but he likes to experiment. Among his offerings are rye bagels, olive, onion or garlic bagels — even cinnamon-raisin, which Feigel’s tried, then abandoned for lack of customer interest. He agrees with Dakes that South Africans prefer plain bagels, but that doesn’t stop him trying.

You can find Brooklyn Bagels at most supermarkets and some delis and coffee shops. Feigel’s Bagels are available from their small factory in the Lyndhurst Shopping Centre, behind the Shell petrol station at the corner of Modderfontein and Johannesburg roads. Phone 011 882 5305.