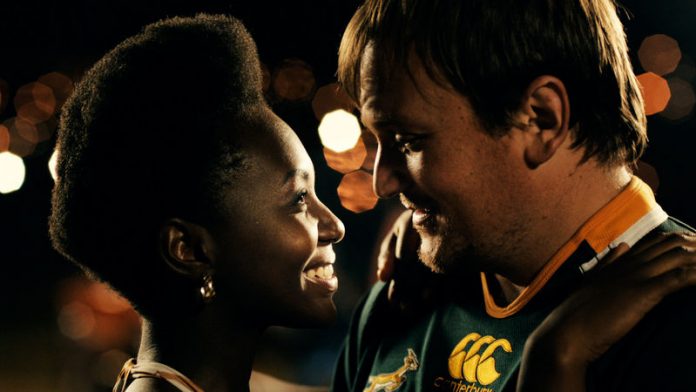 Their scripts need wit as well as feeling, and they require submission to the rather restrictive conventions of the genre while also finding ways to put a new, fresh spin on them.

Fanie Fourie’s Lobola manages those feats pretty well, and it’s both romantic and funny. We can take “romantic” to mean that it deals with the development of love between two characters; whether it actually yanks any particular viewer’s heartstrings is another matter, probably because individual tastes in romance are likely to differ a fair amount, just as their taste in who they fall in love with will vary. Some want chocolates and roses; some want walks in the rain. Some people even find Kristen Stewart sexy.

The new angle imposed upon or the new content inserted into the romcom format, that which makes Fanie Fourie’s Lobola feel fresh, is the South African element, especially the culture clash of a love affair that crosses racial boundaries — those boundaries that were turned into harsh laws by apartheid, were swept away by the new democracy of 1994, but that linger persistently in social attitudes. As the movie’s title says upfront, it’s the institution of lobola or bride price that is the focal issue, displacing the issues of race and class into the sphere of “culture” (rather as Jacob Zuma does when he’s got his pseudo-Africanist headdress on).

The titular Fanie (Eduan van Jaarsveldt) is a young Afrikaner and what you might call a gewone doos, somewhat in the Judd Apatow manner; Dinky Mashabane (Zethu Dhlomo), with whom he somewhat inadvertently or at least semi-accidentally falls in love, is a township gal already striving to move beyond the traditional mores (and social status) represented by her father, who is very amusingly played by Jerry Mofokeng. Dad, in fact, is pretty much willing to sell Dinky off to the highest bidder — or to the guy who arrives first with a substantial cheque.

Not that the African tradition of bride price is attacked in the movie. Dinky herself gets to point out to her father why it feels demeaning to be treated like a chattel being transferred from one owner to another, but the overall perspective of the movie is studiedly neutral. It has to be: the two sides in this cultural clash must be treated even-handedly, with each given the space to express itself. Thus Fanie’s mother (Marga van Rooy) is also able to express her tradition, which means white Afrikaner objection to miscegenation, and it’s not labelled as outright racism any more than Dinky’s dad’s views are shown to be oppressively patriarchal sexism.

At any rate, redemption looms for all the hidebound traditionalists here, and amor vincit omnes, if only by sheer persistence. It’s like a sweetly toned lesson in racial reconciliation for crusty old Afrikaners and Zulus (Dinky has been Zulufied; in the book she’s the MaPedi Dimakatjo Machabaphala). Adapting Nape ’a Motana’s novel, director Henk Pretorius, who co-wrote the script with Janine Eser, moves out of the cloistered whiteness of his earlier Bakgat! films, though not perhaps beyond the bounds of a very conventional kind of cinematic storytelling.

The title of Michael Haneke’s "Amour" is a challenge: not ironic, not celebratory, and yet somehow not complicated either.
Read more
Advertising