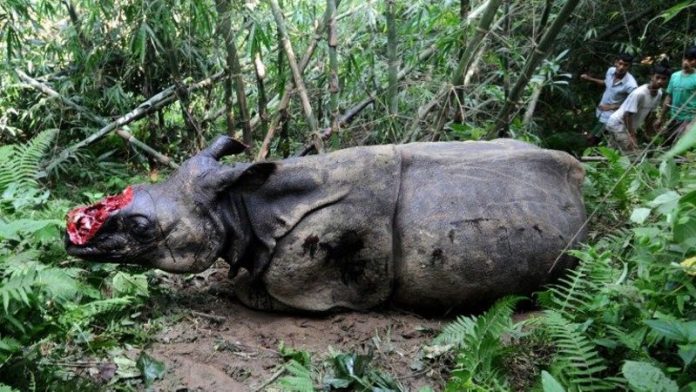 The attacks have taken place around the Kaziranga National Park in Assam state, home to more than two-thirds of the world's one-horned rhinos where heavily-armed poachers shot dead the giant herbivores.

On Thursday, forest rangers deployed to protect the species were engaged in a gun battle for more than seven hours but failed to prevent the killing of another animal.

"The poachers killed the rhino and took away its horn. In two months they have killed 13 rhinos," Kaziranga park warden NK Vasu said.

Wildlife experts say the price of a single rhino horn rivals gold and its value attracts international organised crime groups. China is the main market where it is used for medicine and jewellery while in Vietnam many believe that rhino horn can cure cancer and has aphrodisiac qualities.

"We cannot simply sit tight and watch the rhinos being slaughtered almost every other day," said Apurba Das, a wildlife conservationist in Assam.

At least 21 rhinos were killed last year. A 2012 census in the park put the number of the rhinos at 2 290 out of a global one-horned rhinoceros population of 3 300.

The species fell to near extinction in the early 1990s and is currently listed as "vulnerable" by the International Union for Conservation of Nature.

Authorities say they have intensified security patrols and are planning to seek help from locals residing in the periphery of the national park to improve surveillance.

"It will be just a matter of time before the rhino population in Kaziranga is wiped out by organised poacher gangs with the government failing to check incidents of poaching," said Ramen Deka, a lawmaker from Assam. – AFP