Karachi on the brink after suicide bombing 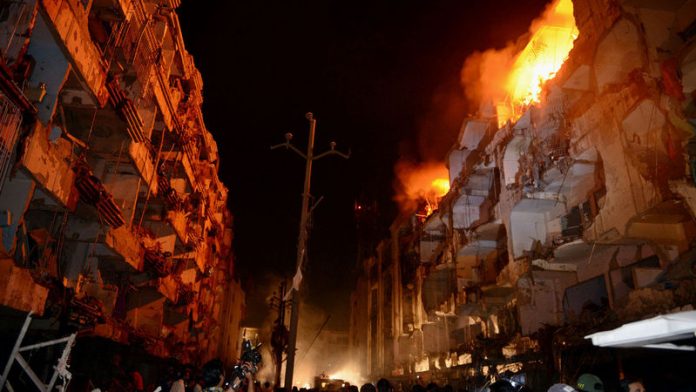 "It's like doomsday to me. I was watching television when I heard an explosion and my flat was badly shaken," said Mariam Bibi.

"I saw people burning to death and crying with pain. I saw children lying in pools of their own blood and women running around shouting for their children and loved ones."

Senior city official Hashim Raza said at least 45 people had been killed and 149 wounded in the blast in Pakistan's biggest city.

Military offensives and US drone strikes against the Taliban in Pakistan have reduced the number of suicide attacks on government and military targets over the past year.

But Sunni groups, most prominently the al-Qaeda-linked Lashkar-e-Jhangvi (LeJ), have escalated attacks against Shi'ites, who they believe are non-Muslims.

With a few hundred hard-core cadres, the LeJ aims to trigger sectarian violence that would pave the way for a Sunni theocracy in US-allied Pakistan, say Pakistan intelligence officials.

Its immediate goal, they say, is to stoke the intense Sunni-Shi'ite violence that has pushed countries like Iraq close to civil war.

Bombings targeting Shi'ites have killed nearly 200 people in Quetta alone since the start of the year, and residents of the city say they are under siege by LeJ death squads who seem to act with impunity.

The bloodshed has prompted human rights group to accuse the Pakistani government, which receives billions of dollars in American aid, of turning a blind eye to the bombings.

While the military have launched major offensives against Taliban fighters they have not taken similar action against Sunni sectarian groups.

In 2012, sectarian attacks and clashes climbed by 47% to 208, according to the Pak Institute For Peace Studies, a prominent Pakistani think tank.

While the Quetta carnage grabbed world attention, a Reuters inquiry into a lesser known spate of murders in Karachi suggests the violence is taking on a volatile new dimension as a small number of Shi'ites fight back.

Pakistan's Western allies have traditionally been fixated on the challenge posed to the nuclear-armed state by Taliban militants battling the army in the highlands on the Afghan frontier.

But a cycle of tit-for-tat killings on the streets of Karachi points to a new type of threat: a campaign by LeJ and allied Pakistani anti-Shi'ite groups to rip open sectarian fault-lines in the city of 18-million people.

Pakistani intelligence agents say the LeJ has become a major security threat in Pakistan, which is also struggling with a fragile economy, dilapidated infrastructure and widespread poverty.

Shi'ites make up to 20% of Pakistan's 180 million people so they are a big target.

"I heard an ear-splitting explosion and reached the spot and saw blood, burned and dead bodies. Fire and smoke everywhere. I felt like I was standing in Beirut," said Nasir Ali, referring to the Lebanese capital, which was gripped by a civil war.

Shi'ite frustrations are rising with each blast. Shi'ites fired weapons in the air on Sunday night in Karachi, a bustling metropolis plagued by ethnic and political violence and crime.

"The explosion was so massive it jolted the entire area," said witness Ali Reza. "Two flats and nearby shops caught fire after the explosion and balconies of various buildings collapsed."

Another witness, Muhammad Kazim, said women and children who were shopping nearby were wounded. – Reuters

Taliban warns Isis not to interfere in Afghanistan