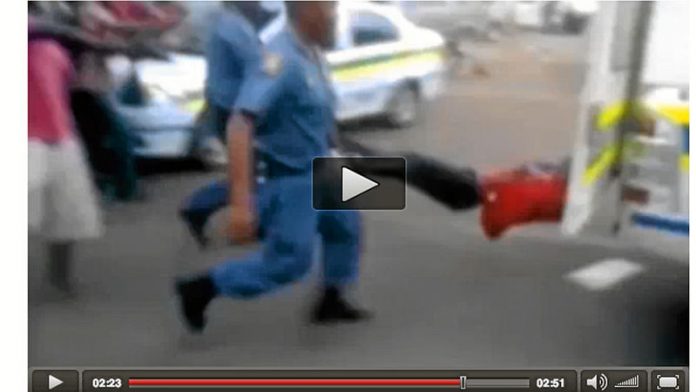 Magistrate Sam Makamu granted a request by the prosecution that the police officers not be identified yet. He postponed the case until Friday.

"The reason why we are requesting a postponement is we want to hold an identity parade, so no pictures must be taken in order to prevent the prejudice of the case," prosecutor December Mthimunye submitted.

The identity parade is scheduled for Thursday. The eight are expected to apply for bail on Friday. Makamu also gave permission for the accused to be kept in the holding cells at an undisclosed police station.

Lawyers for the police officers contended that they could not be kept at the Modderbee prison in Benoni, as many of the people they had helped to convict were there.

The two warrant officers and six constables have been charged with the murder of taxi driver Macia (27). An eyewitness filmed the assault as Macia was tied to the back of a police van and dragged along a street in Daveyton on Tuesday.

The Mozambican national was found dead in the local police station's holding cells several hours later. A post mortem revealed that he had died of head and internal injuries.

At the time, Independent Police Investigative Directorate spokesperson Moses Dlamini said police claimed they ordered Macia to move when they found his taxi illegally parked. "It is alleged that the taxi driver then assaulted the constable and took his police firearm. The warrant officer overpowered the taxi driver and handed the firearm back to his colleague," he said.

Dlamini said the officer then called for backup. The police claimed they put the "resisting suspect" into the police van and took him to the police station. The Congress of South African Trade Unions alleged that police said Macia died when other men attacked him in the cells.

Macia family 'disappointed'
The family of the taxi driver expressed disappointment with the way the Benoni Magistrate's Court handled the case.

"We don't feel okay … They actually said nothing today," Badanisile Ngwenya said outside the court. Ngwenya was speaking on behalf of the family of Macia. He had rented a room in her backyard. She walked out of court with Mido's father Joseph.

"This man is here to fetch his son's corpse home … It's not fair what they did and we are leaving without answers," she said. The frail man aired his dissatisfaction in a soft voice.

About 100 Daveyton residents protested outside the court.

"Steve Biko also died in police custody," read a poster waved by one of the demonstrators.

Protesters complained they had been sent them from pillar to post on Monday. It was initially reported that the case would be heard in the Daveyton Magistrate's Court and several residents went there only to be told it had been moved to the Benoni Magistrate's Court. They vowed to be at the court for the duration of the trial when it started. – Sapa

The problem with generalisations