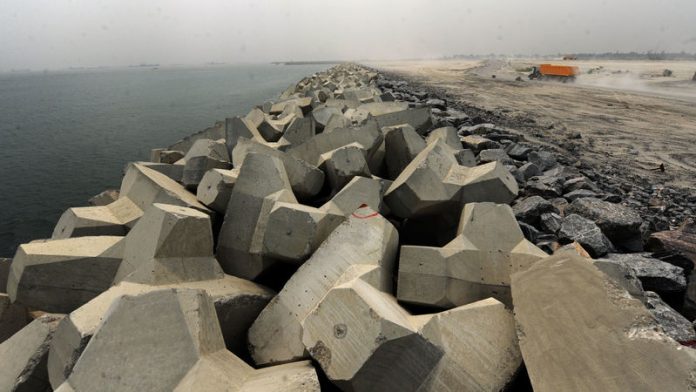 The ever-expanding moonscape that stretches out behind a wall holding back the Atlantic Ocean here will one day host a project designed to help anchor Nigeria as Africa's biggest economy.

But if the ambitious plan to construct a new city on land reclaimed from the sea, called Eko Atlantic, represents Nigeria's future, it is one that will be outsourced. Nearly every aspect of it will be privately run, from electricity supply to security.

But the impressive-sounding title tells an incomplete story, and the Eko Atlantic new city project illustrates the contradictions in a country crippled by corruption and unable to provide basic services, but with vast potential that could indeed one day be realised.

"The more important thing is, fundamentally, you have a population of 165-million" while South Africa's is around 52-million, said Bismarck Rewane, a respected economist and head of Lagos-based Financial Derivatives.

"So even if you are the same GDP, your GDP has to be four times more – 400% more than that of South Africa for you to have [roughly] the same income per capita."

Base years
A recalculation of Nigeria's GDP is the main reason it is projected to overtake South Africa. Nigeria's economic output data is currently calculated using 1990 as the base year.

In order to come up with more accurate data, the new figures will use 2008, greatly boosting overall Nigerian GDP, which the World Bank put at $244-billion for 2011 compared with South Africa's $408-billion.

The rebasing is expected to be complete in October, and economists are predicting a GDP boost of about 40%, which would put Nigeria within striking distance of South Africa.

Since Nigeria's economy has been growing faster than South Africa's – at an estimated rate of 6.6% for 2012 compared with 2.5% – the West African nation would then move ahead of its southern rival in subsequent years.

Nigeria's economy has been supported in particular by high oil prices and the rapid growth of the mobile phone industry. Agriculture accounts for about 40% of GDP and the country is trying to boost production in that sector.

Estimates for when Nigeria will at least equal South Africa have ranged from as early as 2014 to around five years from now.

Corruption fights back
It is clear that certain officials in Nigeria, including the country's finance minister and central bank governor, made serious efforts to reduce corruption and put the country on sound financial footing.

Progress was made in areas including bank reform, and the government tried to create a sovereign wealth fund to better invest oil revenues.

But the often repeated line here is that when someone fights corruption, corruption fights back. Reformers often find themselves checkmated by powerful interests that profit from dysfunction.

The country relies on the oil industry for some 80% of its revenue and most of the population still lives on less than $2 per day.

Any visit to Nigeria reveals its woeful infrastructure, including repeated electricity cuts. Graft pervades all levels of society, helping to create a vast gulf between a corrupt elite and the millions of poor.

Such inequality has been in part blamed for violence.

Extemist attacks
Islamist extremist attacks and the military's response to them have left 3 000 people dead in the country's northern and central regions. Extremists in the mainly Muslim north have recently resorted to kidnappings of foreigners.

Finance Minister Ngozi Okonjo-Iweala, a respected former World Bank managing director who has pushed hard for reforms, saw her own mother kidnapped in December and held for five days.

She nonetheless appears determined to push on, and in her efforts to promote Nigeria and its potential, she has claimed progress in tackling violence and seeks to downplay continuing attacks.

"You will not say that because you had the Newtown, Connecticut shooting in the US, the US is now a risky place you don't go into," she told a recent investors' conference in Lagos, referring to the December school shooting that killed 20 children and six adults.

"So we will have these events. We are not minimising them, but we have to fight them and are fighting them head on."

'Not fair'
Nigeria's potential can be seen in the Dubai-like Eko Atlantic project on the edge of Lagos, where sand dredged from the ocean is building a planned 10-square-kilometre new city.

While it might one day serve as a showcase, some residents and activists say that its steady electricity, clean water and private security will offer something still unavailable to the vast majority of Nigerians.

Those who work and sometimes sleep on a nearby beach and who will eventually be evicted to make way for the project were resigned to the plan.

"Most things that happen in Nigeria are not fair," concluded Toyin Olajide, a 45-year-old mother of five who runs a food stall there. – AFP