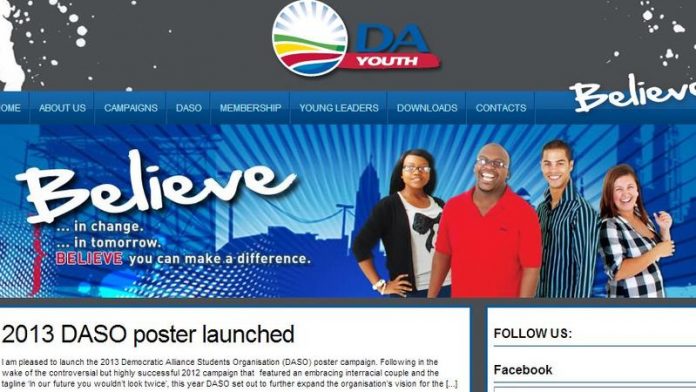 An internet user has bought the URL ancyl.co.za and replaced it with a redirect to the website of the Democratic Alliance Youth.

The domain is owned by Fish Hoek photographer Ralph Higgo. Commenting on an earlier version of this story*, Higgo said, the domain was at one point owned by the ANCYL Western Cape branch. When the branch’s ownership lapsed, he decided to register it himself.

He pointed out that while both the DA Youth and ANC Youth League had known about the redirect for months, neither had contacted him about it.

Asked if he had plans to sell the URL or allow his registration to lapse, Higgo said: “I bought it because I thought it’s a great domain … I'll probably just hang onto it, I think a lot of people enjoy it.”

DA Youth leader Makashule Gana told the Mail & Guardian that they are not behind the redirect and that he did not know who was.

He pointed out that ancyl.co.za is not the official domain of the ANC Youth League, which can be found at ancyl.org.za.

An irate Gana said he has been aware of the redirect for about three months, when people first started asking him about it. "It's probably one of those bored people out there. I don't know what their motivation is and honestly I don't care," he said.

'Sneaky trick'
This type of online trickery is not unheard of. It usually plays out between two groups that are known for having a deep-seated rivalry.

In 2008, Utah Democrats, who have their website at utdemocrats.org, discovered that the URL utahdemocrats.org automatically redirected to the website for Republican presidential candidate John McCain, johnmccain.com.

The person who owned the domain was not affiliated with the Republican Party. The Democrats wrote it off as a "sneaky trick".

More recently, during last year's US election campaign the Obama camp found that anyone who typed in socialists.com or communists.com on their web browsers found themselves redirected to Obama campaign website.

Playing off an age-old rivalry between US Ivy League colleges Stanford and Berkeley, one prankster bought the domain stanfordrejects.com and set up a redirect to www.berkeley.edu, the inference being that Berkeley is a college for students who can't get into Stanford.

Just last week, visitors to the domain Xbox720.com were still being redirected to the US Playstation 3 site.

Pranks of this nature are becoming rarer as net-savvy marketers these days make a point of buying out all the variations of a domain that may be associated with a brand.

* An earlier version of this story said that the owner of the domain was unknown and that a  whois.net search found no result.

Lisa Van Wyk
Lisa van Wyk is the arts editor, which somehow justifies her looking at pretty pictures all day, reading cool art and culture blogs and having the messiest desk in the office. She likes people who share her passion for art, music, food, wine, travel and all things Turkish. She can't ride a bike, but she can read ancient languages and totally understands the offside rule.

Out with the old in the ANC youth league

Magashule’s efforts to bring in reinforcement through the ANCYL thwarted