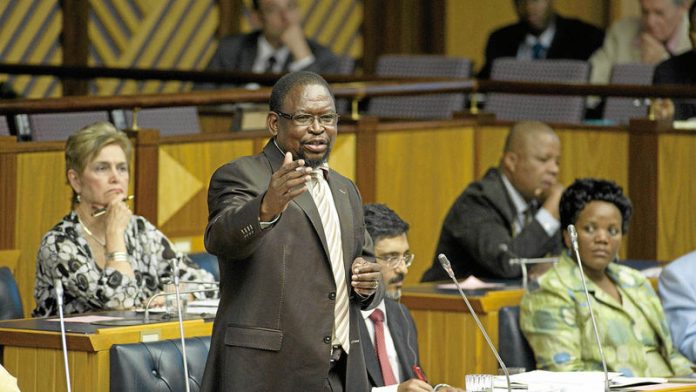 Godongwana, the ANC's economic transformation committee chairperson, and his wife have been named as defendants in a combined summons, which is attempting to recover more than R130-million.

The Godongwanas are among the six people identified as being liable for the losses in the summons, which was lodged in the Western Cape High Court this week.

All the defendants have now been served the summons by the sheriffs of the court, and are being held "jointly and severally" liable for the misappropriated money.

A former trade unionist, Godongwana previously told the Mail & Guardian he had not been approached to hand over the money he had offered to refund.

While Godongwana volunteered to repay R1.5-million, this is the first attempt made to recover any funds from the couple.

"Nobody has asked me to do so. I did submit a letter to them with an offer," Godongwana previously told the M&G. "I haven't paid it because they haven't asked me for it."

When contacted for comment on Friday, he declined to comment and asked the M&G to contact his attorney. The summons can now be legally challenged by the defendants.

Pushed to resign
Godongwana's involvement in the scandal is believed to have lost him his post as deputy minister of economic development last year. It was alleged he was pushed to resign as a result of the pension fund scandal, but he bounced back as the newly elected chairperson of the ANC's national executive committee's economic transformation committee.

However, the case sent shockwaves around the country, after it emerged that more than R100-million was lost when the pension fund money was illegally loaned to collapsed investment company, Canyon Springs Investments 12. Godongwana and his wife owned a 50% interest in Canyon Springs and chaired the company at different times.

The defendants carried on the company's business "recklessly and/or with the intent to defraud the company's creditors" and other entities or people, the summons states.

A commission of inquiry was appointed to look into the collapse of the company and to try to trace the missing money, and successfully followed the trail.

Tony Canny, director of Routledge Modise Attorneys, who led the investigation at the commission, said he was satisfied that the summons might produce some results.

"If we obtain the court order we are seeking, each of the defendants will be held liable for the full amount of the money, interest and legal costs claimed," he said.

Canny said if the court order was granted, his firm would go after whoever had money to make up the amount of R130-million, which includes interest and legal costs.

"I can confirm the Godongwanas offered R1.5-million, but this is unacceptable to the trustees of the Trilinear Empowerment Trust," he said.

Five provident funds
The Trilinear Empowerment Trust is the vehicle set up for the five provident funds which lost the money. As a result of the conclusive findings of the commission, which involved intensive forensic investigations, the combined summons was launched by the new trustees of the trust.

According to the summons, the trust was allegedly established for the benefit of South African Clothing and Textile Workers Union members (Sactwu).

Among the newly appointed trustees is Andre Kriel, general secretary of the Sactwu, who is trying to recover money for clothing workers.

The others involved in the scandal, who are also deemed liable for paying back funds, are former asset manager Sam Buthelezi and former trade unionist Richard Kawie, who are already facing criminal charges in the matter, former director of Canyon Springs Mohan Patel and former attorney Erwin da Gama.

The summons declares that the conduct of Patel and the Godongwanas in managing the affairs of the company amounted to a "gross breach by them of their fiduciary duties as directors".

"The third [Patel], fourth [Enoch Godongwana] and fifth [Thandiwe Godongwana] defendants procured unsecured loans from the Trilinear Empowerment Trust in circumstances where they knew, or ought reasonably to have known, that there was no reasonable prospect that such loans would be repaid," the summons states.

Patel and the Godongwanas failed to comply with the principles of acceptable corporate governance, it said.

Not a cent of the pension fund money has yet been paid back, despite the money belonging to clothing factory workers who are lowly-paid and depend on the cash for their retirement lump-sums.

'Risk-free nature'
In the summons, it outlines how Canyon Springs was an investment company set up to make listed and other investments of a "risk-free nature" utilising funds obtained from the Trilinear Empowerment Trust.

Kawie invited Patel and the Godongwanas to participate in an investment consortium in 2007, utilising the company as a commercial vehicle which was to be funded by the Trilinear Empowerment Trust, the summons outlines.

The trust was established to invest provident funds in black economic empowerment equity transactions, which would "not ordinarily be funded by mainstream financial institutions".

The first part of the loan was advanced in 2007, despite the term loan agreement only being concluded two years later.