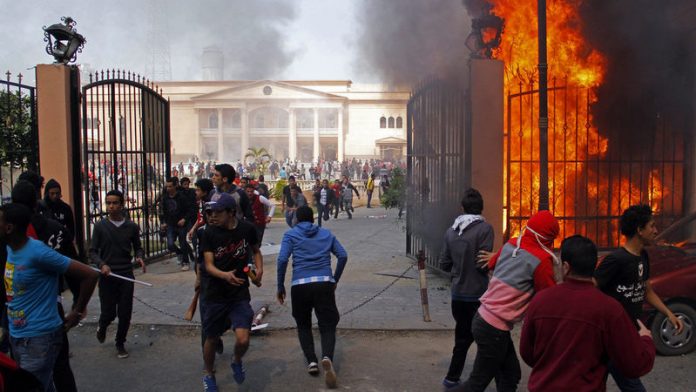 Firefighters were working to put out the fire which spread through the building located in the same neighbourhood as the officers' club, an AFP reporter said.

The unrest comes hours after a court upheld death sentences for 21 defendants over a deadly football riot in Port Said last year and handed down life sentences to five defendants, with 19 receiving lesser jail terms and another 28 acquitted.

In Cairo, fans of Al-Ahly football club, whose members were killed in the February 2012 stadium riot in Port Said in which 74 people died, had warned police that they would retaliate if the defendants, including nine police officers, were exonerated.

Several buildings in a police officers' club complex in the Egyptian capital were in flames on Saturday, an AFP reporter said.

According to a senior security official, hardcore football fans known as the Ultras stormed the complex and set fire to the buildings.

Residents of the affluent island where the club is situated were using garden hoses to try to extinguish the flames. Other buildings in the complex had their windows smashed.

Several hundred members of the Ultras were also making their way towards the interior ministry, state television reported.

The court sentenced two senior police officers to 15 years each – former head of police security, general Essam Samak, and brigadier general Mohammed Saad, who at the time of the riot was responsible for the stadium gates, which were locked.

During sentencing, the judge read out a string of names without identifying their position, leading to much confusion.

"First we were happy when we heard the 21 death sentences. We were cheering and didn't hear the rest of the verdict," one football supporter told AFP. "Then we were very angry." – Sapa-AFP.