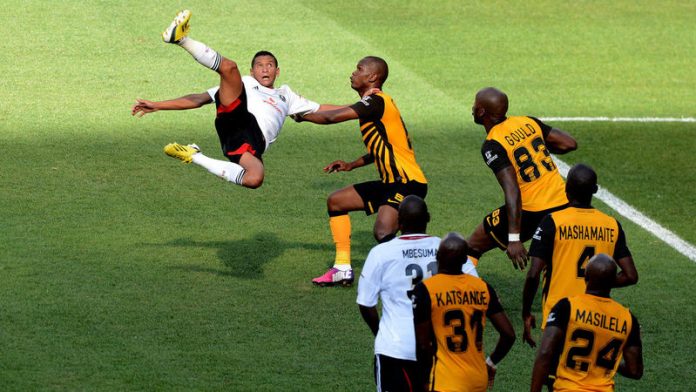 The Chiefs retained their five-point lead at the top of the Absa Premiership standings following the goalless encounter.

Amakhosi took control in the first period, while Pirates, who remained second in the table with a game in hand, found their feet in the second half, and despite a late flurry of chances for Chiefs, they settled for a share of the points.

The hosts launched wave after wave of attack in the opening stanza but could not find the initiative in the final third and were unable to breach the Pirates defence.

The Buccaneers, meanwhile, sat back and settled for the occasional counter attack.

Kingston Nkatha went down a few metres outside the box in the eighth minute and Bernard Parker's well struck free kick was deflected wide.

Shortly after, a Tlou Segolela corner found Siyabonga Sangweni unmarked at the far post but the Bafana Bafana player could not keep his shot on target.

Chiefs were awarded another free kick in the 26th-minute and Tshabalala went for goal, but it was well saved by Senzo Meyiwa in the Pirates goal.

Tshabalala made a run into the box in the 35th-minute, but he came unstuck and the ball was cleared.

Daine Klate had a go at goal just seconds later, though his speculative long-range effort went out for a goal kick.

Six minutes before the break, Thabo Matlaba produced a fierce strike, running onto the ball from 30-metres out, but the ball drifted wide.

A Chiefs counter attack created a race between Tshabalala and Meyiwa for the ball, bouncing high in the Pirates box, with the Bucs shot-stopper retrieving just in time.

In first-half injury time, another set piece from Tshabalala from the left found the head of Nkatha, but his attempt sailed wide.

Meyiwa saves Pirates
Ten minutes after the interval, Bernard Parker rushed a shot from the edge of the area and could only watch as the scuffed effort rolled out well wide of the target.

Three minutes later, a flowing move from Chiefs had the Pirates defence backpedalling before the ball fell to Tshabalala, whose powerful strike was well held by Meyiwa.

The rebound was gathered by substitute Sthembiso Ngcobo but he lofted his attempt into the crowd.

Tlou Segolela provided a sharp chance for Pirates in the 72nd-minute. His free kick found Happy Jele at the far post, but the subsequent shot was turned out for a corner.

Ngcobo made a bustling run into the Pirates box in the 80th-minute, and his effort from an acute angle rattled into the side netting.

In the dying stages, Ngcobo had one of the best chances of the match, with Chiefs throwing themselves forward.

Ngcobo was left with time and space in the middle, on the edge of the area, and his strike was heading for the back of the net but Meyiwa pulled off a stunning full-length dive to deny the hosts the win. – Sapa.