Woods pleased after his second tournament win of the year 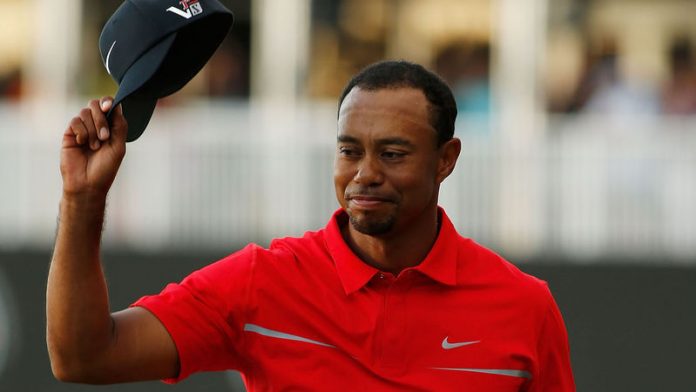 Woods sent out a Masters warning shot with his second win of the year at the championship on Sunday.

Composed throughout and deadly on the greens, Woods posted a one-under-par 71 for a winning total of 19 under par, with fellow-American Steve Stricker runner-up after shooting 68 in the final round.

Stricker could have been credited with assisting Woods, after giving his rival a 45-minute putting session on Wednesday.

Woods, who needed just 100 putts in the four rounds, was quick to acknowledge the role his closest challenger had played in his week.

"I played well, thank you Steve for the putting lesson. I felt good about how I was playing, I made some putts and got rolling," he said.

Scott shot the best round of the day and the tournament with a bogey-free eight-under-par 64 on Sunday.

Woods' seventh victory
Woods claimed his first win of the year at the Farmers Insurance Open at Torrey Pines and continued his excellent record in World Golf Championship (WGC) events with a 17th triumph.

The victory was his seventh in this tournament in 13 starts and his fourth triumph at Doral.

It marked his fifth US tour win in his last 19 events and added momentum to his quest for a first major championship since the 2008 US Open when he tees it up next month at Augusta.

McDowell, playing with Woods, created some early pressure with birdies on the first two holes, but he lost ground with a bogey at the fifth and his challenge faded with another on the par-four 11th.

The Northern Irishman finished with a double-bogey on the final hole after being forced to take a drop when his approach found the rocks at the edge of the water guarding the green.

"That six on the last leaves an extremely sour taste in my mouth," said McDowell. "But all in all I am ecstatic at the way I am playing. He was tough to catch. He was always kind of making me press."

Woods, who went into the final round with a four-stroke lead, never looked in danger of losing his grip on the top of the leaderboard and a wobble at the end, with bogeys on the 16th and 18th, was only a minor blemish on what has been an excellent week for the 14-times major winner.

'It always feels good'
Woods looked in control from tee to green and his form will deservedly make him favourite for the Masters.

"That's how I know I can play. That's the thing. To be able to bring it out a couple of times so far this year and then be able to close and gets W's – that's nice," he said.

"Any time I can win prior to Augusta, it always feels good."

Immediately after his round, Stricker was asked about whether he regretted providing putting help to Woods before the tournament, given that he was only three shots away from victory over his friend.

"At times you kind of kick yourself … but it's the nature of the game, we help each other out," he said, but later noted that his help may have been for the broader good.

"He's got a lot of talent and he might have done this without my help. But it is good to see him [like that], it's good for the tour and I'm happy with the way I played," said Stricker.

World number one Rory McIlroy ended a week of work on his swing troubles with a confidence boosting 65, which moved him into a tie for eighth place nine strokes off the pace. – Reuters