ANC pledges its help to Zanu-PF during Zim elections 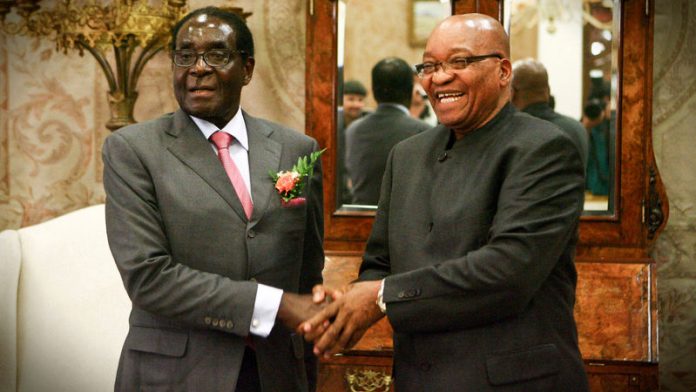 Ahead of a crucial referendum on Zimbabwe's constitution this Saturday, the ANC on Tuesday reiterated its support for President Robert Mugabe's Zanu–PF and renewed an undertaking to help the party win the country's general elections later this year.

"Zanu-PF has been governing Zimbabwe since 1980 and we feel they have gained the necessary experience and wealth of knowledge over that time to benefit the people of that country and govern again," said ANC spokesperson Keith Khoza.

"The people of Zimbabwe will decide who governs them, but if called on to assist, we won't hesitate in coming to their assistance to ensure they are successful," said Khoza.

"This is the same way in which we would consider any requests from any other liberation movement we have ties with."

In late 2011, ANC secretary general Gwede Mantashe told a Zanu-PF national conference in Bulawayo that his party would support Zimbabwe's governing party in its mission to retain power at the next national election.

The comments were criticised because South Africa operated as the chief political negotiator in the power-sharing agreement brokered by former president Thabo Mbeki between Zanu-PF and its rival Movement for Democratic Change (MDC), following disputed elections in 2008.

The agreement saw MDC president Morgan Tsvangirai become prime minister of Zimbabwe in a government of national unity – something Mugabe and his party described as "unnatural" and "unworkable".

'Shared history'
The exact nature of the support the ANC would provide was not made clear but Khoza confirmed it would not be a financial contribution.

"This doesn't necessarily mean we agree on everything the Zanu-PF does or says. But our shared history means that we have a responsibility to assist each other whenever and wherever possible," he added.

Khoza also said the ANC's support would by no means translate into the South African government providing support to Mugabe or his party.

"Our interaction has never been defined within state relations – it's purely a party-to-party thing."

The ANC's comments comes days before Zimbabweans were due to head to the polls in a referendum on a new constitution, which was drafted under the unity government.

South Africa's neighbour is due to elect a new government sometime later this year, with Tsvangirai and other opposition politicians citing fears of election violence.

Zimbabwe's police have already been accused of intimidating voters.

In early March, Zimbabwe's police commissioner Augustine Chihuri told top-brass members of the force to ensure Zanu-PF won the upcoming elections, adding that there were "surrogates of the imperialists that should never rule this country".