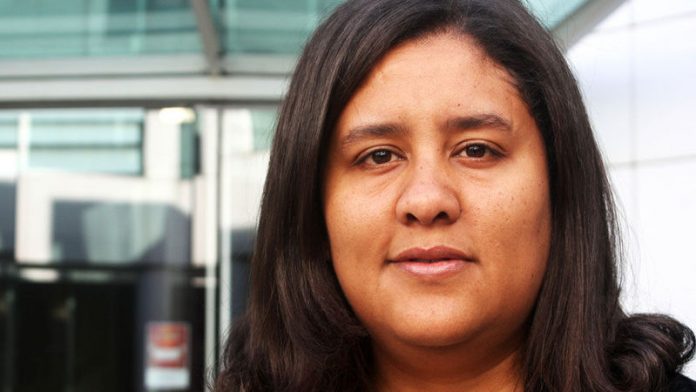 The first time I met her, we were sitting on the terrace at a mutual friend’s Killarney flat. She leaned in – because that’s what Mandy Rossouw did – and asked all she could about me, putting together who I was and where I fit into the scheme of things. She needed to know these sorts of things. She made it a point to know everyone. And she did. She knew who we all were – academic or politician or diplomat or journalist or chef – and how we fit together and why it mattered at all. And if she didn’t know, she’d find out, in minutes or hours, days, weeks, whatever it took. Because that’s what Mandy did.

In a few months, in an unexpected turn of events, we were working together at the Mail & Guardian; she would be the one that would show me around, tell me how things worked, introduce me to the team.

“I love politics,” she said to me in those early days, grinning, her dimples sitting deep into her checks. And she did. She loved the intrigue and the manipulations and people involved in it all and she made it her business to manoeuvre adeptly in that world. When she told me this, she was at her desk, stacks of documents in piles around her. She had just gotten off the phone with a source and was looking like the cat that had swallowed yet another canary. I can’t remember what her story was that week, but I can assure you it was juicy.

Mandy loved politics and she loved journalism. She was a journalist’s journalist. She was cool under pressure, would never give up a source, was even-handed in her reporting but never afraid to go for the jugular when it was needed.

She broke Nkandla while working on a feature for the end-of-year edition for the M&G. She was doing a piece about presidents and former presidents and where they came from. As soon as she arrived along bumpy roads into that small town, she saw the compound and knew this was something big. When she got back to the office, photos and documents in hand, she phoned up the presidency. They responded to her queries with disbelief. “How did you get there?” was about all they could muster. “Um, by car?”

Mandy was hysterically funny, she was confident, she was fearless. She made the tough calls, like the one she made to Trevor Manuel in 2010 while he was lying in a hospital bed and asked him why he was there. He shouted at her – and then didn’t talk to the M&G for months. But it was the thing to do. We had to ask, and Mandy was never afraid to ask.

When the news of her death came through on Tuesday morning, the Twitter feed lit up with tributes: from Parliament, from diplomatic missions, from foreign correspondents, from current and former colleagues. I wasn’t the only one she had shown the ropes to. BBC’s Karen Allen wrote: “She was my SA mentor, a wonderful colleague and dear friend.” The New York Times’ Lydia Polgreen wrote: “She schooled me on SA politics. Such a kind and generous person.”

Mandy worked too hard. The M&G’s former deputy editor, features and special editions, Charlotte Bauer, told me early on Tuesday that when she talked to Mandy on the weekend and found out she was ill, she told her: “If I hear your voice on 702 tomorrow morning I’ll kill you.” Because that’s what Mandy did. She worked. She worked when she was sick and when she was too tired. She worked on weekends, and at night. When she didn’t show up for a dinner on Monday evening – something completely unlike her – and didn’t respond to messages and calls, her colleagues knew something was very, very wrong.

Adriaan Basson, her best friend since university and her colleague at City Press, went to her apartment that evening. He got in with the help of the manager and found her there on the couch; she had been gone for hours. Somehow, knowing that there were no signs of struggle, that she was safe at home, gives me a very small bit of solace.

Ferial Haffajee, who was her editor at the M&G and then at City Press, told me that morning that Mandy once mentioned to her that she wouldn’t live past 40. I wonder if that was because of her youth – she was 33 and I too can remember thinking that I wouldn’t make it so far when I was young – or rather that she somehow sensed that her time here was short, that she would have to get it all done and get it done quick. Perhaps that is what pushed her to the limit, that was what had her accomplish far more than most at her age – she wrote two books, had heavy hitting positions at Beeld, M&G, City Press and Radio 702.

Editors loved her. She would get the kind of quotes that were so good it made you wonder how it could have all come out like that; she came up with the kind of stories that not only showed how well-connected she was but also with the sort of angles that would have you falling out of your chair because they were so sharp and, often times, so unique, that you knew nobody else would have the story Mandy was pitching.

Mandy worked it. She wasn’t afraid of bumping heads, had a wicked sense of humour and had the kind of journalistic instincts that you just can’t teach. Mandy was a journalist through and through. She knew more about what was happening in your own newsroom than you did. Within minutes, and I mean literally minutes, of being given a new title earlier this year, Mandy texted me. “Congratulations and well done. High time. Lemme know if you’re keen for a celebratory drink.” I still don’t know who her source was – she always kept things close to her chest. But I told her I’d set something up in a few weeks. Life got in the way. But it stopped in its tracks this week for many of us. Mandy was too young to die, had too much life to live, too many people who adored her.

Journalism has lost a powerful daughter. One so unique that she’s actually irreplaceable; one who would have gone onto even greater things. Our thoughts go out to her family, her many, many friends, her colleagues. Mandy, my friend, you will be so missed.

The memorial service for Mandy Rossouw will be held on Wednesday, March 13 at 2pm at Media24 offices, 69 Kingsway Road, Mediapark, Auckland Park, Johannesburg. The funeral will be held in Paarl on Saturday, March 16.