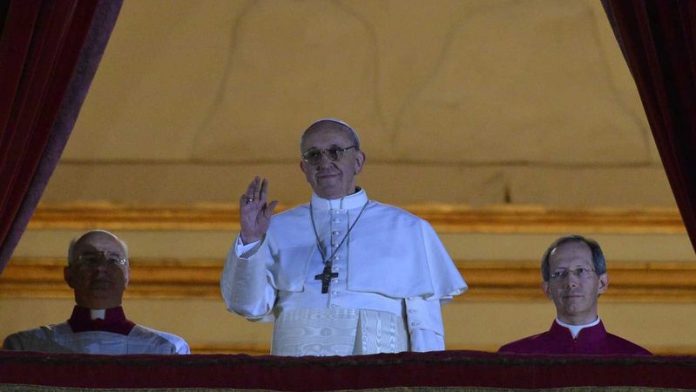 Pope Francis (76) appeared on the central balcony of St Peter's Basilica just over an hour after white smoke poured from a chimney on the roof of the Sistine Chapel to signal he had been chosen to lead the world's 1.2-billion Roman Catholics.

The choice of Bergoglio was announced by French cardinal Jean-Louis Tauran on Wednesday with the Latin words "Annuntio vobis gaudium magnum. Habemus Papam" ("I announce to you a great joy. We have a pope")

Francis becomes the 266th pontiff in the Church's 2 000-year history at a time of great crisis and difficulty.

Although a conservative he is seen as a reformer and was not among the small group of frontrunners identified before the election. He also went against one of the main assumptions before the election, that the new pope would be relatively young. He is the oldest of most of the possible candidates and was barely mentioned in feverish speculation about the top contenders before the conclave.

First Jesuit pope
He is the first Jesuit to become pope. The decision by 115 cardinal electors sequestered in a secret conclave in the Sistine Chapel came sooner than many experts expected because there were several frontrunners before the vote to replace Pope Benedict, who resigned in February.

The cardinals faced a thorny task in finding a leader capable of overcoming crises caused by priestly child abuse and a leak of secret papal documents that uncovered corruption and rivalry inside the Church government or Curia.

The wave of problems is thought to have contributed to Benedict's decision to become the first pontiff in 600 years to abdicate.

Thousands of people sheltering from heavy rain under a sea of umbrellas had occupied the square all day to await the decision and the crowd swelled as soon as the white smoke emerged. They cheered wildly and raced towards the basilica as the smoke billowed from a narrow makeshift chimney and St Peter's bells rang.

The excited crowd cheered even more loudly when Francis appeared, the first pontiff to take that name. "Viva il Papa (pope)" they chanted.

"I wasn't expecting it, but I'm absolutely delighted. It's a very unique moment. There is a great sense of unity here. It's great they have come to a decision about who will lead the church," said John Mcginley, a Scottish priest from Glasgow who travelled to see the conclave.

"It's a great moment in history, something I can tell my mum," said David Brasch (30), from Brisbane Australia.

"He's got to get the child abuse under control, I don't know how they're going to do that. He's got to unite 1.2-billion people."

Bands from the Italian armed forces and the Vatican's own Swiss guard army paraded in front of the basilica before the new pope appeared.

The secret conclave began on Tuesday night with a first ballot and four ballots were held on Wednesday.

Following a split ballot when they were first shut away amid the chapel's Renaissance splendour on Tuesday evening, the cardinal electors held a first full day of deliberations on Wednesday.

Black smoke rose after the morning session to signal no decision.

The previous four popes were all elected within two or three days. Seven ballots have been required on average over the last nine conclaves. Benedict was clear frontrunner in 2005 and elected after only four ballots. – Reuters