Emidio Macia’s death: No way to treat a neighbour 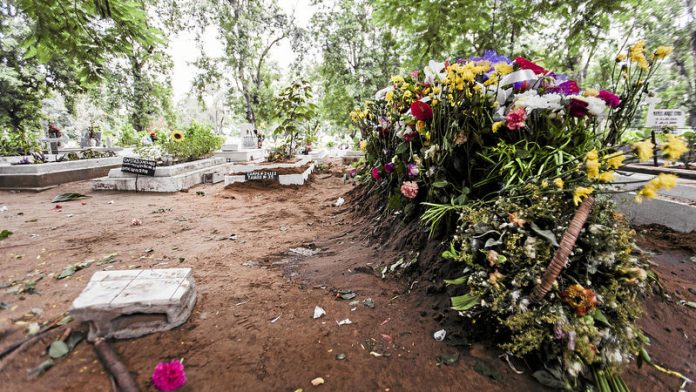 Although funerals are about closure, they are also about a physical show of support for the bereaved. It can be a stinging but necessary salve on a fresh wound – each message of condolence amplifies the pain of the loss before soothing it.

At home on the afternoon of Saturday March 9, with his son's body already buried, the evidence of this was written on the face of Jossefia Macia, the father of the slain Mozambican taxi driver, Emidio Macia. At some point, flanked by Beatriz Chaguala, a Frelimo MP, and the Mozambican ambassador to South Africa, Fernando Fazenda, Macia cupped his face in his hands and wept, oblivious to the entourage of ministers and deputy ministers near him.

At Macia's memorial service in Daveyton a few days earlier, hardened taxi bosses called for the death penalty for the policemen who  dragged him behind their van and beat him to death. But at his funeral, South Africa, at least on the political front, was absent.

It was a diplomatic blunder that did not go unnoticed. But instead of it being addressed with outrage, South Africa was chided with a restraint typical of the Mozambicans, then left to fester.

Officially, a message of condolence and an apology from the South African government were sent to the office of Mozambique's President Armando Guebuza through Minister of International Relations and Cooperation Maite Nkoana-Mashabane.

But the human touch, the healing salve, was absent.

How could South Africa forget what it means to be brotherly, to be physically and emotionally there?

At Macia's highly politicised memorial service in Daveyton, ANC general secretary Gwede Mantashe said South Africa owed its freedom to the people of Mozambique, who "paid a heavy price" for supporting it. He described the incident as xenophobia, which was a cancer in South Africa's communities.

Jose Nascimento, an attorney who has a watching brief on behalf of the Mozambican government – just as he did in 2001 when Pretoria dog unit members went on trial for setting their dogs on illegal Mozambican immigrants – said: "The average Mozambican is seeing this as a xenophobic attack encompassed in police brutality. This just reminds them of what happened in 2008 [when Ernesto Alfabeto Nhamuave was burned to death during a xenophobic attack]. For them, it's a repeat of that tragic murder. We need a lot more civic awareness on the issue of xenophobia in South Africa."

It's a sentiment Mozambicans will express in varying ways, conveying the unshakeable feeling that South Africa is coming apart at the seams.

"I've been to South Africa several times since my childhood and I can tell you that Zambians, Malawians and even Zimbabweans were treated better than I was," says a greying Miguel Pateguana, whom I meet at a Maputo watering hole.

"In my mind, the Komatipoort agreement [also known as the Nkomati Accord, a 1984 nonaggression pact signed between apartheid South Africa and Mozambique] soured relations between the two countries … I have heard that, in South Africa, violence is present every day. We understand there is poverty but what I can't understand is why police would want to act like that … I read somewhere that Macia has been living there since he was 10 years old. So the people who treated him like that understood that he was a Mozambican."

In a Benoni court this week, prosecutor December Mthimunye said the postmortem attributed Macia's death to hypoxia, caused by depleted levels of oxygen in the brain and body. "He could not get oxygen into his body and brain, it was [a] slow and painful [death]," Mthimunye was quoted as saying in the Times newspaper.

"There were no organs that were not damaged, [not] his heart, lungs or spleen. Everywhere you look, severe bruising to his arms shows he was desperately trying to fight for his life, his testes were severely swollen, showing huge trauma, a clear sign of [a] 'torture' beating …

Intimidating witnesses
"When he arrived at the station, his pants were missing, he was crying, begging for help. They took him to the cell. Blood splatters on the walls and floor attest to the ferociousness."

The Macia family has indicated it will sue the police minister.

So what significance does the comradely image of Mozambique's former president Samora Machel and former ANC leader Oliver Tambo adorning the entrance of the Matola Museum hold? Does it translate into anything meaningful for the average citizens of the two countries?

Probably not. A young Mozam­bican man I meet outside the museum tells me that the only reason Mozambicans have not turned their rage on South Africans is because "they are scared to death of Mozambican jails".

The family of South African expatriates, who the young man works for, talk of their struggle to fit into the rigid structures of Mozambican society. "While they're not unfriendly," Eileen Pretorius tells me, "they don't bother to make new friends. The rich stay rich and the poor stay poor."

As a result, she has mostly built up relationships with other South Africans. Racism doesn't exist, she says, but the aftertaste of Portuguese colonialism lingers on.

"When you try to treat your employees like human beings, my visitors will tell me, 'don't do that, you're spoiling them'. There is the perception that, if you give, they [the underclass] will take advantage – and it's both Mozambicans and South Africans that will tell you that."

Tensions, established and new, tend to raise their head in times of trouble. The immigration officials at Maputo International Airport reminded me that "Jacob Zuma stayed at Matola, but you are treating Mozambicans like dogs".

If there was a lesson to be learnt, it was one of humility, even-handedness and going beyond the call of duty, as exemplified by the politician Chaguala.

She accompanied Macia's widow Beuda and her son Sergio home from the funeral and stayed by Jossefia's side while he wept for his son and his unfulfilled aspirations in a place he had made a home away from home.