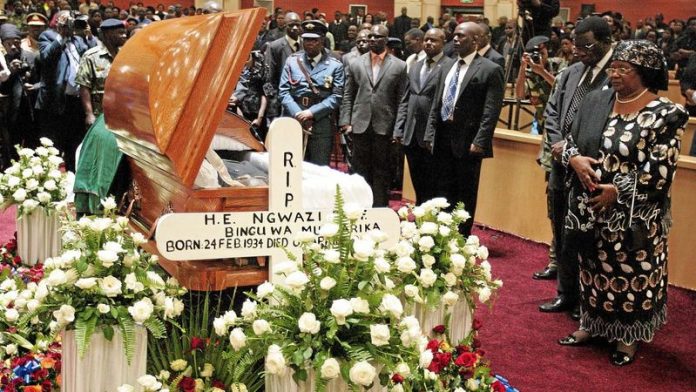 The decomposing corpse of Malawi's president Bingu wa Mutharika was flown to South Africa last year in a bizarre plot to buy enough time to prevent the then vice-president, Joyce Banda, from succeeding him, a commission of inquiry has found.

The Malawian commission's report, released last week, identified Mutharika's brother, Peter, as the mastermind behind the plot to subvert the Constitution.

Peter and 11 other alleged plotters – most of them senior political figures of the ruling Democratic Progressive Party – were arrested and charged with treason in a Malawi court this week.

At the time of Mutharika's death, South Africa's diplomatic corps, military and intelligence services were confronted by a rapidly shifting and very serious set of circumstances.

It is not clear when the South African government became aware that Mutharika was dead and, once they knew, how quickly they tried to prevent the alleged plot against Banda.

The department of international relations and co-operation declined this week to confirm or deny the chronology of events presented in the commission's report.

The department's spokesperson, Clayson Monyela, said: "Back then South Africa took a position that this is a head of state of another sovereign country and, therefore, that country needs to take the lead in communicating the circumstances of his death. South Africa could not take the lead …"

Repatriation
The South African government paid for the repatriation of Mutharika's body to Malawi, including a military aircraft to transport his remains and another jet for his family and entourage.

The international relations department referred the Mail & Guardian to the defence department regarding the cost of the exercise, but said it was a necessary diplomatic courtesy.

Defence spokesperson Sonwabo Mbananga declined to reveal the cost, saying: "It is rather difficult for the ministry to respond to questions emanating from a report which we have not seen nor a process we are not privy to." Although the M&G shared the report with Mbananga, he said that the ministry could only engage "with officially communicated and shared information" from the Malawi government.

The commission found that Mutharika collapsed at his official residence in Lilongwe at approximately 10am on April 5 last year and suffered cardiac arrest in the ambulance that took him to hospital.

The cover-up and intrigue began almost immediately, the commission found.

Peter Mutharika, in particular, performed three overlapping and problematic roles: as head of the Mutharika family present at the hospital when his brother was admitted; as de facto leader of the ruling party that was openly hostile to Banda; and as foreign minister.

Other figures in the alleged plot were Democratic Progressive Party vice-president and then energy minister Goodall Gondwe, and government secretary Bright Msaka.

Ousted
The commission heard that the three men approached the army, police and the attorney general's office over the next 24 hours to try to find a way to stop Banda, but all three institutions insisted that the Constitution was clear that the vice-president should succeed Mutharika.

Banda had opposed Mutharika's plans to anoint Peter as his successor and was ousted from the party.

She then formed an opposition party, but retained her position as vice-president because she had been elected to the position as Mutharika's running mate in 2009.

The Malawi High Commission in South Africa ordered an air ambulance from Netcare International Rescue, which required a letter of guarantee to secure it. The Malawians' April 5 letter to Netcare gave Mutharika's name as Daniel Phiri.

When the Netcare air ambulance landed in Lilongwe at 7pm, its medical team reportedly refused to allow the president's corpse on board, saying they did not have clearance to carry a dead body to South Africa.

At 8pm – about seven hours after Mutharika's death – Malawi state media reported that the president was ill and was being flown to South Africa for medical treatment.

Preparation for burial
At the same time, South African intelligence caught wind of the president's death and contacted Malawi intelligence to ask why they intended to fly his body to South Africa.

The Malawians replied that "there was [a] need to take the body to South Africa for postmortem and embalming, and to allow for time for preparation for burial".

A new problem had arisen in the interim – the Netcare air ambulance crew had exceeded their flying hours and could not take off. Peter Mutharika then called his South African counterpart, International Relations Minister Maite Nkoana-Mashabane, to request her intervention. It is unclear whether Peter Mutharika disclosed his brother's death to Nkoana-Mashabane at that stage.

The president's corpse arrived at Waterkloof military air base in Pretoria at 2.30am on April 6. According to his personal physician, he was strapped to a stretcher with a tube placed in his mouth to make it appear that he was still alive.

It is unclear whether the South Africans knew what to expect, but the high commissioner left in tears.

Succession
Mutharika was then taken by ambulance to the casualty wing of 1 Military Hospital in Pretoria, where it took less than 15 minutes for South African military doctors to confirm he was dead.

By 5am, his body lay in a Pretoria mortuary – but a whole day of plotting by the Malawians lay ahead.

A 9am Cabinet meeting attended by most ministers, except Banda, decided to seek a court interdict to block her succession and to appoint an acting president instead.

By early evening, the South Africans had lost patience with the Malawians' machinations and told Peter Mutharika that President Jacob Zuma would announce his brother's death if they did not. According to the report, this intervention caused the alleged plotters' resolve to collapse.

At 8am on April 7 – nearly 48 hours after Mutharika died – the Malawian government announced his death; the Cabinet pledged its allegiance to Banda and she was sworn in as president that afternoon.

Since her inauguration, Banda is said to have been the most frequent head of state to visit South Africa.