Police brutality on the march 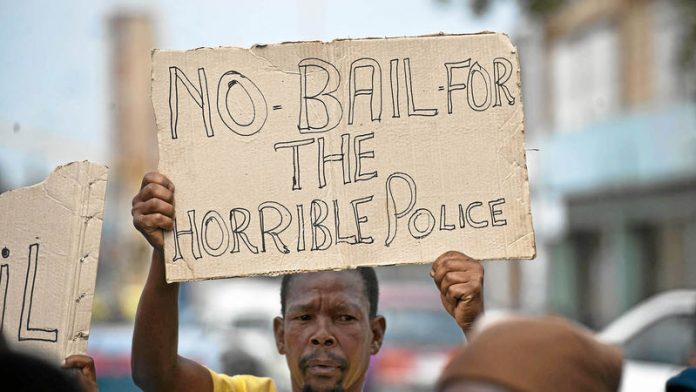 Police Minister Nathi Mthethwa was in Daveyton on Thursday following the brutal killing,  allegedly by police officers, of the Mozambican taxi driver Emidio Macia, and Mthethwa's national commissioner Riah Phiyega was at the Marikana commission of inquiry, defending the killing of 34 striking miners allegedly by men under her ultimate command.

It was a stark illustration of the extent to which an apparent policy of deliberately harsh police action, backed by tough rhetoric from top political leaders, is playing out in the streets under President Jacob Zuma and Mthethwa, who is one of Zuma's most important Cabinet allies.

With community protests and labour unrest increasingly worrying the government, the signal being sent out from the top and by field commanders is that it will be met with all the force that a militarised police service can muster.

In his State of the Nation address last month, Zuma called on protesters "to exercise their rights to protest in a peaceful and orderly manner", saying it was unacceptable "when people's rights are violated by perpetrators of violent actions, such as actions that lead to injury and death of persons, damage to property and the destruction of valuable public infrastructure".

He warned that he had "instructed the justice, crime prevention and security cluster to put measures in place, with immediate effect, to ensure that any incidents of violent protest are acted upon, investigated and prosecuted". Special court processes would be set up to deal with them more rapidly.

But he said nothing about police brutality.

His remarks cap a steady trend in the police, which began with former deputy police minister Susan Shabangu's now infamous "shoot to kill" comments, which were broadly supported by then police commissioner Bheki Cele.

Since then, Mthethwa has consistently supported officers implicated in violence. His tenure has also been marked by persistent controversy over the politicisation of crime intelligence and concerns that efforts to secure the job of former crime intelligence head Richard Mdluli were motivated by political expediency.

David Bruce, an independent researcher on crime and policing, said the way in which Mthethwa's powers were defined in the Constitution provided him with enormous scope.

"It provides us with enormous scope for inappropriate interference by the minister in policing," Bruce said. "The Constitution provides him with authority to provide directions to the national commissioner and there is no framework which sets out limitations on what kind of directions he can give."

South Africa now had a situation where there was enormous potential for political manipulation of the police, as well as for the police to be used in a partisan political way.

"It is evident that he [Mthethwa] does use the powers conferred on him in a highly politicised manner."

Mthethwa had also consistently used his authority to promote the aggressive use of force by police.

Bruce said the police were a product of the official belief that the problem of violent crime in South Africa could be resolved through heavy-handed policing.

Fight fire with fire
"A big part of this is that basically the thing that he [Mthetwa] has sold himself on is that he is going to be able to resolve the crime problem through what he calls the 'fight fire with fire' approach. But essentially then, he is not willing to accept that that kind of approach encourages brutality.

"Part of their whole agenda at the moment is to deny that there is a systemic problem of brutality. And so they are still trying to pass it off as a bad apple issue," Bruce said.

At the beginning when Mthethwa was first appointed, it was a "very pleasant surprise", said Gareth Newham, the head of the governance, crime and justice division at the Institute for Security Studies.

"[He] came across as probably one of the best police ministers that we've had for some time. The minister really seemed to take an effort to understand policing, he strengthened the police secretariat [the civilian body that gives advice on policing] and introduced legislation to strengthen the Independent Police Investigative Directorate [IPID]. He was accessible and engaging with civil society. But these incidents of police brutality have in some way raised serious concerns about his commitment to police accountability," Newham said.

The directorate, the police watchdog, revealed some startling figures after Macia's death: there are currently more than 500 criminal cases against police members implicated in murder, serious murder, serious assault and rape before the courts.

Although the Macia case will be a test to see to what extent Mthethwa is willing to take action against police brutality, there are two recent landmark cases in which Mthethwa has been accused of an attempted cover-up of police brutality and incompetence.

The Lonmin miners
The IPID compiled a report about the alleged brutal assault of Lonmin miners held in custody after the Marikana massacre and handed it, with recommendations, to Mthethwa in August last year.

Although the report was expected to go before the Marikana commission, Mthethwa's spokesperson, Zweli Mnisi, said the alleged assaults fell outside of the scope of the commission.

"So the allegations are being handled as a criminal matter by the IPID and, should there be a need to pursue these through the criminal justice system, these will be pursued as such," Mnisi said.

The miners are preparing to lodge a claim for millions of rands in compensation from the police relating to their alleged assault in custody following their arrest on August 16 last year, the day of the Marikana massacre.

The miners' legal team, representing 270 miners and led by advocate Dali Mpofu, said detailed statements outlining the alleged assaults by police officers had been taken from their clients. Some miners were allegedly hospitalised after they were moved to prison, members of his legal team said.

Ten police officers allegedly beat the miners or were present while the assaults were taking place. The Mail & Guardian established at the time that the North West police deputy commissioner, Lieutenant General William Mpembe, was one of the 10 who were identified at an identity parade and was allegedly present when some of the miners were assaulted in custody.

Mpembe was arrested and held for a night after he was identified. He later said he was planning to lodge a R1-million claim for his arrest based on false allegations.

Thulani Ngubane, spokesperson for the police in the North West, said everything connected to the assault case had been put on hold until the Marikana commission had concluded its investigation.

Mpembe was still at work and had not been suspended from his job, Ngubane said.

The jogger
Mthethwa has gone to the South Gauteng High Court to appeal against a South African Human Rights Commission directive ordering him to apologise to Chumani Maxwele (28), who was arrested for allegedly showing his middle finger to President Jacob Zuma's motorcade in 2010 and allegedly tortured.

The human rights commission ordered Mthethwa to apologise within 30 days of its ruling, which was handed down last year.

Maxwele denies ever having raised his finger or having sworn at the cavalcade.

He said that the thought that Mthethwa could go to such lengths to ensure he did not have to apologise for the actions of his police officers hurt him.

He is relieved that his civil case against Mthethwa for damages totalling R1.5-million will be heard in the Western Cape High Court on April 29. Mthethwa is fighting the claim.

One of Zuma's protection officers, Amele Ginya, stated in his sworn affidavit in the civil case that he saw Maxwele "showing gestures with his right hand and with his middle finger pointing up". He alleged Maxwele had directed the remarks, "Fuck you, Zuma, fuck you, voetsek", at the convoy.

When they tried to arrest him, Maxwele had "behaved violently and sworn at them", he claimed.

Maxwele has vigorously denied these and all the similar claims made by the members of the VIP protection unit.

According to Maxwele, three men leapt out of a black BMW X5 with AK-47s and arrested him while he was jogging along De Waal Drive. In an interview with the M&G shortly after his arrest, Maxwele said he had been shoved into the vehicle and his hands were tied with a cable behind his back.

"Then they got a big black bag and they pulled it over my face so I couldn't see anything. It was horrifying and I was paralysed. I felt unable to breathe" Mnisi said Maxwele had chosen to institute a civil claim against the police, which was his right.

"However, given that Mr Maxwele has chosen to take this route, it is the minister's contention that the court process must be respected and, therefore, the South African Human Rights Commission erred in making a finding on a matter where a complainant had chosen to use a court route.

"As the ministry, we will therefore deal with the matter that has been placed before the court and, ultimately, we shall respect and abide by the outcome of the court once it reaches its decision."

"We ought to speak out against police brutality before this country becomes a police state," he said.