Serve with a pinch of humour 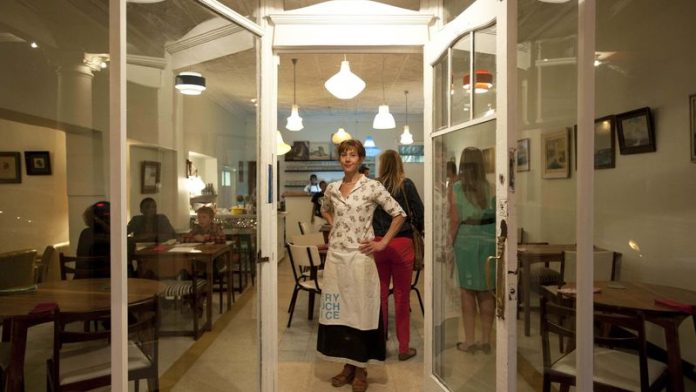 Andrea Burgener is the enfant terrible of Johannesburg chefs. You won’t be pandered to at her restaurant, the Leopard, where you have to bring a doctor’s note if you want your salad dressing on the side.

“Don’t they trust us to dress a salad?” asks the ebullient Burgener, who has kindly agreed to cook something for me at her home out of her new cookbook Lampedusa Pie (Macmillan), out in two weeks.

At her three restaurants, Superbonbon, Deluxe (which had two incarnations in different places) and now at the Leopard, patrons have been invited to have fun. Diners have been served airline food, on real South African Airways trays, scored their meal for half price if they arrived in their pyjamas, and were able to bring their dogs to one of the restaurants for a gourmet meal of chicken-liver biscuits and steak tartare.

Annoyed, she recounts how someone had complimented her on “the concept” of the airline meal, which she said had “great” chicken á la king, avo ritz, pudding and crackers.

“Perhaps I’ve painted myself into a quirky corner,” she says. “It’s who I am, it’s what I do. I don’t have a theme or a concept. I make decisions like somebody in their own house. I never really conceived the rest.

“A sense of humour can save you. The whole foodie thing has turned food into some temple to worship at. It’s like a cult, or a fad to seek out, a vogue. If something is a fad, you’ll drop it because you don’t understand it. It’s not brain surgery; you’re just serving someone some supper.”

Too many cooks
She begins to pull things out of her fridge. A bowl of “duck ham” breasts, and a muslin-covered bowl of labneh, or strained yoghurt. We decide on the labneh, which she rolls with a spoon into roughly round shapes, covers them with broken pistachios, and serves with lemon zest and a pear preserve. It’s sweet, sour and has a soft, comforting and crunchy feel in the mouth.

Burgener said she’d started cooking occasionally at Bob’s Bar in Troyeville, Johannesburg, in the mid-1990s, and took over one evening as guest chef. Next door was the late Braam Kruger’s Kitchenboy restaurant. They recognised one another’s sensibilities, “really clicked with food”, and he asked her to cook for him.

“Things got exaggerated. It was not your usual restaurant. For example, there was no extractor, and he was cooking [with] a lot of chilli.”

“People sat down at 8 o’clock … you had to wait. People were plastered by 10, when the food arrived. He’d decide on one night that all the boys must serve without shirts, and he’d have boys with nice chests.

“He had a sense of theatre, performance. I think people came there to be abused by him. People came to be pushed.

“I’d be standing in the kitchen at 7pm and there had been no prep done, and Braam was outside playing Frisbee with his dog Tarzan. One time I set the wok on fire and he had to come and rescue me in the kitchen.

“We were at his house one day and he decided to roast a whole lamb, but he decided we should pierce it all over, and fill it with liquorice allsorts.”

This sounded crazy, “but he had thought it through. Lamb and fennel go so well together, and lamb and sweetness.

“It was the only way he knew how to live. I went out to lunch with him about two weeks before he went into hospital for the last time, and he had diabetes and had three cream sodas with his meal. He refused to acknowledge reality. You’d go out with him, and he was 20 years older than anyone, and he’d party everyone to pieces.”

Kruger — an artist, chef, writer and raconteur — died at the age of 58 in June 2008, and at times Burgener seems to be channelling him.

Up for a mad time
In 1999, Burgener opened Superbonbon, a tiny restaurant with a kind of Asian/trashy theme in Richmond in Jo’burg. This was the place where scandalously you could order Coco Pops and milk (which came with a giant prize, such as a large blow-up pencil, or fluffy slippers) as well as those airline meals.

“It was like a yearlong party, before children. Perhaps we wouldn’t have been flippant if we’d had children to send to school.”

She’d got some money from her parents and some friends gave her a bit more to start Superbonbon. It was the kind of place where they had to “borrow money for the first night’s stock”.

“There was a moment [in Johannesburg] where a lot of people were up for a mad time.” But the moment couldn’t last, so Superbonbon was closed, to be followed in 2001 by Deluxe in Parktown North. Here, apart from the dog breakfasts (canine meals in silver “trio” bowls with chicken-liver biscuits, steak tartare and water — which meant that a lot of people brought their dogs) they served eggs Benedict for breakfasts, as well as pan-fried quail with German potato salad, and Congolese ­peanut chicken.

A year and a half later, she was pregnant again and closed Deluxe for four months, after which it reopened in the Stanley Avenue complex near Milpark in August 2003.

Burgener was in the back, cooking, because for her physical work is easier than the “emotional work” of being front-of-house where you have to “kiss ass for four hours”.

“People are still learning how to be customers,” she says. “If their wallet is open they treat you how they want.

Growing up
Finally, then, we have the Leopard, which was on 4th Avenue in Parkhurst, but after a brief hiatus  will now be reopening in the same place the Hard Times Café used to be on Melville’s 4th Avenue, where there are “very few Hummers”.

This is perhaps Burgener’s most grown-up, or structured restaurant, but you’ll still find spaghetti and Marmite on the menu. The restaurant was named after Giuseppe Lampedusa’s novel Il Gattopardo, (The Leopard). The author also provides the title to Burgener’s recipe book.

The recipe for the chicken and macaroni pie or timbale, which Lampedusa describes, is in the book.

Burgener says that, had she been left to her own devices, the book would have been more flippant, but her publisher suggested she include some conventional recipes so that it would appeal to a wider audience.

It would also ensure that it would not be one of those cookbooks that languish on the shelf.

Lampedusa Pie is not an everyday cookbook, but there’s plenty of good ideas (recipes for harissa, dukkah, granadilla curd, or a “hot, sharp dressing”, even how to make paneer) and time-saving tips, such as “warp-speed” ricotta gnocchi. You won’t find a recipe for bolognaise, or lasag­ne, but rather one (adapted from Kruger) for lemon, soy and chilli prawns cooked in baking paper in the oven, with cellophane noodles.

I found it a bit of a struggle to cook from the book, perhaps because it calls for some ingredients that I don’t usually buy or have in my pantry, but that’s not the fault of the writer. Perhaps it takes a leap of faith to tackle the Viennese carrot torte, or the peanut butter pie.

I can recommend the Asian salad of sliced cucumber, onion, carrot and sesame seeds with a dressing of sesame oil, vinegar and honey. The Indian bread salad is also good — pita or sourdough toasted with cumin, and tossed with tomatoes, cucumber, onion, chilli, dhania and a dressing.

“Potatoes cooked under a brick” were a revelation. Thinly sliced, with thinly sliced onion, then mixed with cream, they’re then flattened into a baking tray (I used a rock that I’d found at the seaside). The pressure forces the onions and potatoes into far greater proximity than one normally would when cooking them, making the potatoes taste of onion, and vice versa.

I’m also looking forward to cooking the green pea falafel: soaked chickpeas and frozen peas are blended with cumin, spring onion, chilli, garlic and mint, and then bound with breadcrumbs and an egg.

With one book down, Burgener now wants to do another and, just before I leave, she shows me London chef Jacob Kennedy’s Bocca Cookbook. She highlights a recipe for sanguinaccio, a dessert made with, among other things, pig’s blood, whipping cream, cinnamon and chocolate.

For Burgener food is adventure —and she’s inviting the adventurous to join in the fun.