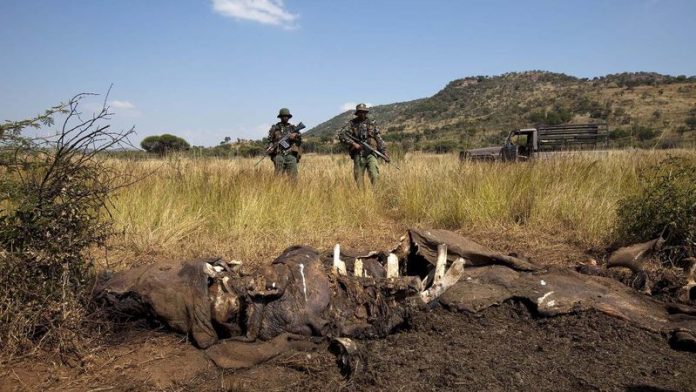 The head of Vietnam's wildlife trade authority has angrily dismissed accusations that his country is the driving force behind the illicit trade in rhino horn, describing them as "bullshit". He went on to blame China for the slaughter.

In a rare interview during the triennial conference of parties to the Convention on International Trade in Endangered Species (Cites), Do Quang Tung, who is the acting head of Vietnam's Cites Management Authority, lashed out at critics who have identified the country as a "rapacious" consumer of rhino horn.

"I don't care [what they say]," he said. "That is a bullshit report. Vietnam is not the main destination."

He claimed that Vietnamese intelligence agencies had identified China as the destination for "99% of the horn that goes through Vietnam" and that "we do not have much evidence that Vietnam is the main consumer country".

"Most of the complete rhino horns are illegally exported to China," he said. "Only the chopped up horn is used in Vietnam … Up to this stage, we cannot control the border. Every day they have a massive shipment, not only of wildlife, but everything going through [to China].

"Last year, more than 600 rhinos were killed in South Africa. That is almost three tonnes of horn. At $50 000 a kilogram, it is equivalent to millions of US dollars. I don't know how Vietnamese people can afford it at those prices."

He claimed some of the horn was also being funnelled to Asian communities in the United States and Europe.

But the wildlife trade monitoring network Traffic, the species survival commission of the International Union for Conserv­ation of Nature (IUCN) and the Environmental Inves­ti­gation Agency (EIA), a non-governmental organisation (NGO) that targets environmental crime syndicates and carries out undercover operations, all say there is "overwhelming" evidence that Vietnam is at the heart of a shadowy rhino horn "trade nexus".

In their most recent report to Cites, the IUCN, Traffic and the Asian Rhino Specialist Groups said that "the principal end-use market has been Vietnam". But they express concern about the growing role of China, citing horn seizures in Asia and the large number of European export permits issued in the recent past to move auctioned rhino horns and antique libation cups to China. They also cited the numbers of

More than 4000 rhino horns, about 12 tonnes' worth, are believed to have been smuggled out of Africa between 2009 and 2012. Only a fraction of the shipments – about 2.3% – were detected and seized by law enforcement agencies in Asia.

Do said Vietnam had "very good controls at airports and ports" and was "the biggest country in seizures". "We have had 10 cases in Vietnam since 2010," he said.

The figures appear to show otherwise. Between 2009 and September 2012, Vietnam reported only six rhino horn seizures, totalling just 70kg. In the past six months, as parties geared up for the Cites conference in Bangkok, Vietnam said it seized a further 42kg of horn. China has reported 30 seizures of contraband horn weighing more than 150kg since 2009.

More than 400 rhinos are believed to have been "hunted" by Vietnamese citizens in nine years, beginning in 2003 and ending in 2012, when South Africa stopped issuing hunting permits to the country's nationals and tightened legal loopholes. In that time, Vietnam quickly came to dominate the trophy hunting market.

"None of the Vietnamese can hunt," Dawie Groenewald, a notorious safari operator who faces hundreds of criminal charges relating to allegations of illegal rhino horn deals and hunts, once said. "They are not here to hunt. They are here to get the horn."

Despite the evidence, Do maintained that there was "no linkage between incidents of poaching and trophy hunting".

Of the 607 trophy horns recorded to have been exported from South Africa between 2006 and 2010, only between 150 and 170 were officially declared to have been imported into Vietnam. The bulk simply vanished.

In a report to the Cites secretariat, Vietnam said it had conducted random checks on only 40 hunters, just 10% of those believed to have participated in sham hunts. Of that number:

Vietnam has no tradition of sport or big game hunting and does not have any recognised hunting associations.

Personal effects
In terms of the Cites Convention, to which both South Africa and Vietnam are signatories, rhino horn trophies are "personal effects" and cannot be legally traded for commercial gain or given as gifts. But Cites relies on member states to enact legislation to give force to those principles. Although Vietnam has recently implemented a ban on rhino horn trade, it has no laws criminalising the "gifting" of trophies.

One recent case spotlighted Vietnam's unwillingness or inability to act. In September last year, Tram Be, the vice-chairperson of Vietnam's second largest bank and a man dubbed the "secret entrepreneur" by the Vietnamese press, reported the theft of two rhino horns from his house. Police set off after the thieves but made no attempt to arrest them.

Tram Be claimed he had been given an 885kg stuffed rhino as a "house-warming present" by the hunter who shot it and that he was therefore the legal owner. The Vietnamese police accepted his claim and local newspapers were later warned off the story by government officials.

Do defended the banker, saying the hunter had felt the trophy was "not safe in his house and temporarily put it in the house of a friend", a claim at odds with the banker's own version of events.

He said that Vietnam had banned "all" rhino horn imports in January this year.

But the prohibition, signed by Vietnam's Prime Minister Nguyen Tan Dung, contains an exclusion clause that environ­mental activists say is "big enough to drive a bus through".

Undertaking
In 2006 and 2008 the Vietnamese embassy in Pretoria was involved in a number of scandals in which senior diplomats, including a political counsellor, an economic attaché and the embassy's first secretary, were implicated in smuggling rhino horn. To date, Vietnam has failed to take any action against the diplomats.

In a public confrontation at a Cites side event last week, Nguyen Thi Minh Thuong, the "international co-operation" official at Vietnam's Cites Management Authority, claimed that Vietnam's law enforcement agencies had made "endless efforts" to crack down on the trade and that "strict punishment" was meted out to the diplomats involved.

South African Environmental Affairs Minister Edna Molewa said the Vietnamese government had confirmed that no steps had been taken against the diplomats but "there was an undertaking that they would do something about them".

Cites this week stopped short of imposing sanctions on Vietnam, but gave it eight months to implement key recommendations. These include strengthening law enforcement, border controls and legislation and reporting on seizures, prosecutions and penalties imposed.

Meanwhile, the EIA has petitioned the US government to impose trade sanctions on Vietnam until it demonstrates full compliance with Cites regulations.

"Vietnam and Vietnamese diplomats have been shown to be at the centre of a massive illegal rhino horn trade that is fuelling the biggest rhino poaching crisis in over 30 years," the EIA president, Allan Thornton, said. "Vietnam must enact and enforce a total domestic ban on all rhino horn trade and enact strict measures to combat Vietnam's criminal syndicates driving the poaching in South Africa."

Julian Rademeyer is the author of Killing for Profit: Exposing the Illegal Rhino Horn Trade, published by Zebra Press