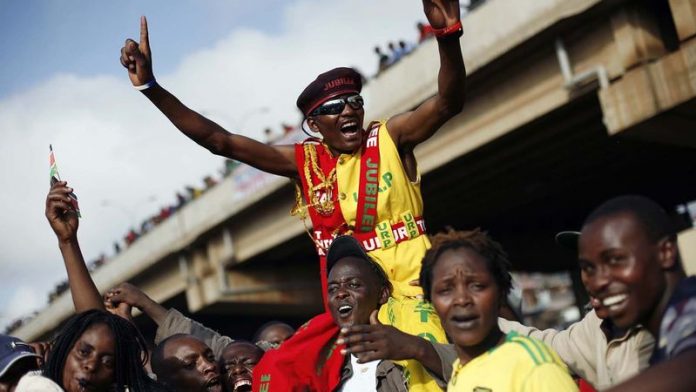 In most countries, the announcement of election results is about releasing numbers. In Kenya, it was handled as though it was the inauguration itself. An auditorium of ambassadors, dignitaries and journalists were made to sit through prayers, choral numbers, anthems and a peace ballad before Uhuru Kenyatta was eventually handed the winner's certificate.

Five nervous days after Kenya voted, the country got the results it was waiting for on March 9. They showed that the son of Kenya's first president had won a first-round victory by the slimmest of margins. He crossed the 50% threshold needed to avoid a run-off by slightly more than 8–000 votes of the 12.3-million cast.

His nearest rival, Prime Minister Raila Odinga, got 43% and refused to accept the outcome, complaining of "rampant illegality" and "massive tampering". Unlike the previous time in 2007 when Odinga cried foul after an election, he told his supporters to stay at home and let the courts deal with his allegations of rigging.

The battle for the presidency now moves to Kenya's new Supreme Court, which must decide before the inauguration on March 26 whether to annul the election.

Even as the celebrations continued over a peaceful election, the postmortem had begun over its obvious failings. Kenya's electoral body, the Independent Electoral and Boundaries Commission (IEBC), was set up to avoid a repeat of the chaos after the last poll. It was handed a budget of $226-million, or $16 per registered voter. A survey by the Administration and Cost of Elections (ACE) network showed that, in the United States, the cost per voter is less than a dollar whereas Kenya's neighbour, Uganda, spends $4 per voter.

This was meant to be Africa's first truly high-tech poll but that ambition ended in messy failure. The biometric voter identification kits were undone by the absence of electricity in many places. Polling stations in rural Kenyan schools and in marquees in the slums had no sockets for the fingerprint scanners and laptops. Back-up batteries, where provided, ran out before lunchtime, leaving poll clerks to scan the paper registry.

Manual count
Then the electronic transmission system meant to deliver swift provisional results from all 291 constituencies broke down. A simple database error was later blamed but no one was able to fix it.

Safaricom, the Kenyan telecom company that provided the encrypted network, said it had warned that problems might emerge. After the system crashed, returning officers had to be put on helicopters and flown to Nairobi for a manual count.

The failures did not stop election observers from proclaiming a success on the grounds that it was peaceful. Western diplomats, who were silenced last week after Kenyatta's Jubilee coalition accused them of siding with Odinga, said the errors at the IEBC were a case of "cockup not conspiracy".

Kenya's rowdy press and television was muted after media owners made a "gentleman's agreement" to avoid controversy and any coverage that might incite ethnic tensions. In the place of news and analysis, stations played prerecorded peace messages. A local satirist, Patrick Gathara, called it the "peace lobotomy" and lamented a compact between the media and the public: "Kenya would have a peaceful and credible poll no matter what."

It has been left to a handful of civil rights activists and the losing Cord alliance to point out that the election authority's sums do not add up. Although 12.3-million votes were cast for the president, only 10.6-million were recorded for governorships. With both races part of the same sheaf of ballots given to voters, it would suggest that the presidential vote may have been inflated.

The major point of concern was the decision on March 6 to throw all observers out of the tallying centre one day into the count. The IEBC said this was done because party agents were slowing down the count but independent poll monitors such as the Carter Centre were also removed.

Tragic failures
Maina Kiai, the respected former head of Kenya's National Human Rights Commission, said that "tragic failures" amounted to "more than a cockup". The anticorruption group Africog was expected to lodge a petition with the Supreme Court on Friday calling for the entire vote at all six levels of government to be restaged. Lawyers for Odinga have already petitioned the court for a rerun of the presidential ballot.

So far calm has prevailed in Kenya, which is still haunted by the violent fallout from the elections five years ago. Then heated claims of a stolen election sparked clashes that left 1300 people dead and 600–000 homeless. The use of the courts to protest the outcome this time is testament to public faith in the new chief justice, Willy Mutunga, who is seen as independent. But he and a panel of five judges face the onerous task of deciding whether an exhausted country needs to go back to the polls.

Kenyatta is already looking past court hearings in Nairobi to The Hague where he faces trial at the International Criminal Court (ICC) for his alleged role in the post-election violence in 2007-2008.

But there are increasing signs that the case against him has been weakened after charges against his co-accused, Francis Muthaura, were dropped.

The former head of Kenya's civil service will not stand trial after a key witness for the prosecution recanted his testimony this week. The ICC's chief prosecutor Fatou Bensouda complained that several people who may have provided important evidence had died or were too afraid to testify.

But she insisted that the case against Kenyatta – he is accused of controlling a militia responsible for deadly reprisal attacks in the Rift Valley – would go ahead. Observers will be watching for any sign that the government offers less support to his running mate, William Ruto, who also faces the ICC at a trial starting in May.

Both men have denied the charges and will be confident that their election win will shield them from a prolonged stay at The Hague.ut there are worrying claims that Kenya's celebrated election results do not add up

By pushing their usually valid complaints onto the streets and the courts, opposition leaders deny governments the popular goodwill and international credibility they need to govern effectively
Read more
Africa

Media freedom in Kenya: Analogies are being drawn with Moi’s repressive era

Until 1992 government-owned media outlets had a monopoly on radio broadcasting, and journalists critical of the former president were harassed.
Read more
Africa

Kenyan broadcasters back on air after government block

The NTV and KTN channels were both accessible on Monday, but two others - Citizen TV and Inooro TV - remained blocked
Read more
Friday

We’re complicit in our own exploitation

"We are failing to put the blame squarely where it belongs: on our political leaders, our business leaders and ourselves".
Read more
Africa