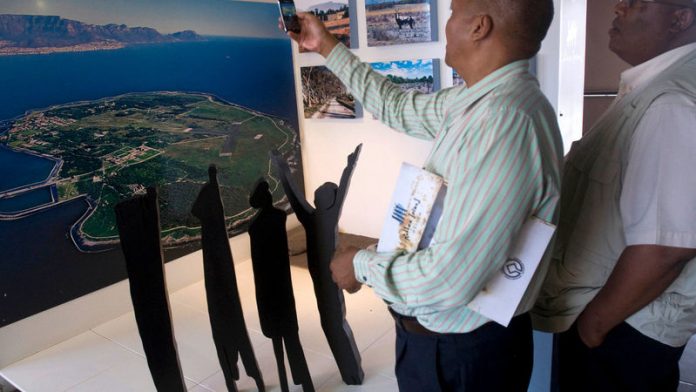 The Mandela 27 project, launched at Cape Town's gateway to Robben Island on Thursday, aims to draw on cultural links between South Africa and Europe during the racial apartheid era, such as the Rock against Racism campaign in Britain and Nelson Mandela's 70th birthday concert at Wembley Stadium.

The parallel demise of communism in East Europe and white minority rule in South Africa in the late 1980s and early 1990s will be highlighted.

For decades it was a bleak enigma at the southern tip of Africa, shrouded in such secrecy that the world was denied any photographs of its most famous inmate, Nelson Mandela.

Now there are plans to take Robben Island to the world through a video game, a website and even a mobile reconstruction of the prison cell where the struggle hero languished for 18 of his 27 years behind bars.

"The fall of the Berlin wall didn't seem to be related to the release of political prisoners in South Africa," said Roger Friedman, a spokesperson for the project, "but if you take a step back, the connections are very clear."

The initiative comes 19 years after the end of apartheid and as a "born free" generation deals with 21st century concerns rather than looking back. Its loyalty to Mandela's party of liberation, the African National Congress, is far from guaranteed.

'Serious game'
Mandela's spartan former cell currently attracts thousands of tourists to Robben Island, a UN world heritage site almost 10km off the mainland, but has been criticised in some quarters for a lack of curatorship. The replicas of the cell will be a low-budget affair made of plywood but will feature information panels and multimedia exhibits.

They were described as "DIY cells" by David Powell of Swedish education partner Elderberry. "They can be made by anyone with basic carpentry."

The cells are likely to be displayed in schools, libraries and museums. Powell added: "The target audience is quite young: we're talking about events before they were born. 'What was apartheid?' is a question we'll have to answer. They weren't here."

The video game is described as a "serious game" – not purely for entertainment – in the style of a graphic novel. Based on interviews with former prisoners, it is based around five recurring elements of life in the remote jail: prisoners were not allowed to see children; they craved physical activity including football; education was a key pursuit; communications were heavily censored so that messages had to be smuggled; hunger strikes were used to make existence bearable.

It is being developed by South African students with help from the Serious Games Institute based at Coventry University's technology park in the UK.

Jacqueline Cawston, programmes director at the institute, stayed on Robben Island for three days during her research. "The story of the cultural events hasn't been told," she said. "The way that we're telling it will be engaging to an audience that hasn't read history books and weren't alive at this time. The whole point of the project is to get the message out there."

The (unrelated) Serious Games Institute, at North West University, in South Africa, is another partner. Its representative, Werner Ravysewerner, said the target audience was 16- to 25-year-olds. "Serious games work very well in engaging young people in learning. This graphic novel will depict life as it was on Robben Island. We are making use of students to create compelling material."

But players should not expect to find themselves in the role of Mandela himself as it is more likely that anonymous characters will be used.

Mandela 27, part-funded by the European Commission, will also feature a website with an interactive timeline that includes music, theatre and poetry as well as 3D visualisations of Mandela's cell and other locations on the island.

Boost the island's image
Robben Island spans 518 hectares and measures 3.57km from north to south. It was used as a prison from the mid-17th century, contains a graveyard for people who died from leprosy and is home to a substantial breeding colony of African penguins.

Organisers hope it will boost the island's image after recent years plagued by strikes, ferry breakdowns and complaints about tour guides of variable quality and a museum that has rested on its laurels since opening 16 years ago.

Sibongiseni Mkhize, chief executive of the museum, said: "This comes at a time when are trying to improve the manner of how we tell what happened at Robben Island."

There are plans for a reunion of former prisoners on the island later this year, he added. He said Mandela, who was recently back in hospital for tests, had not been consulted about the project but that his foundation was aware of it. – Guardian News and Media 2013

The ANC has, until now, always rejected going to the International Monetary Fund, which underscores how bad our economic situation is
Read more
Article

Hair to the rescue as oil spills blight coastlines

We’ve tried leftism for long enough and what we have to show for it is corruption and mismanagement, when what we need is jobs and education. Is it time to try out a Mashaba-esque version of right-wing politics?
Read more
Advertising
Continue to the category
Politics