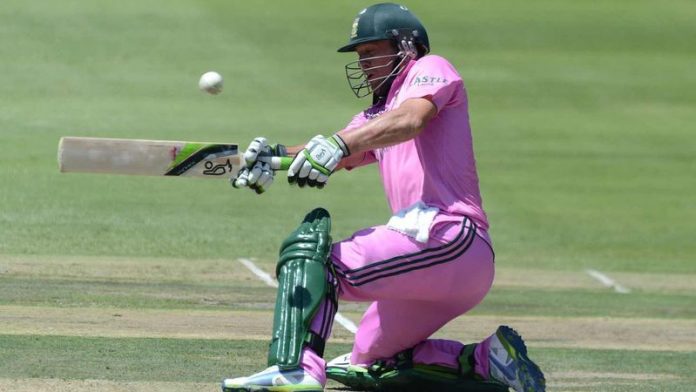 The Proteas took a 2-1 lead in the five-match series in the third one-day international against Pakistan at the Wanderers, in Johannesburg, on Sunday, with the two batsmen combining for a 238-run stand off 194 deliveries, including 18 fours and four sixes, after Pakistan won the toss and sent the hosts in to bat.

Paceman Lonwabo Tsotsobe, who took three for 74, struck in the fourth over to dismiss Nasir Jamshed, for 10 runs, when he was trying to clear mid-off but found Amla instead.

Mohammad Hafeez and Kamran Akmal established a useful 82-run stand and looked to be taking the game away from South Africa when Ryan McLaren came on to bowl. Kamran was on 30 when he tried to cut his slower-ball bouncer and got an edge to the keeper. Robin Peterson got the big wicket of Mohammad Hafeez, who made 57 before he holed out to Dale Steyn at long-off.

Peterson also forced Younus Khan (19) to chop onto his stumps and, after Shoaib Malik's brief appearance, Misbah-ul-Huq was joined by Shahid Afridi and the fireworks began.

Known for his massive blows, it was the old “Boom Boom” Afridi on display as he smashed anything loose out of the ground.

To add to the excitement, after hitting McLaren for a four and a huge six, Afridi took a swipe and missed the next delivery, to have his stumps knocked out the ground when he was on 73.

Called to the crease
However, before reaching the boundary rope, he was recalled to the crease when it was found McLaren's delivery was a no-ball. Afridi returned to add another 15 runs and was eventually caught off a Tsotsobe full toss for 88 off 48 deliveries.

Although Pakistan were well ahead on the run-rate, they had lost too many wickets and the tail-enders were unable to keep up the momentum. McLaren bagged three for 56, taking his wickets at crucial times.

De Villiers brought back Steyn early to finish off the game and it proved to be a successful move when Junaid was caught and bowled after a career-best nine runs.

Kleinveldt wrapped up the match with the last wicket after Wahab Riaz had contributed 45 runs.

Earlier, the Proteas had started slowly as Mohammad Irfan and Junaid put them under pressure with their pace and bounce. Irfan took the early wicket of Graeme Smith (3), who got an inside edge onto his stumps, and surprised Colin Ingram (17) with his bounce when the ball reared up at him and he got a leading edge into the gloves of Kamran.

Amla and De Villiers proceeded to undo all the good work done by the Pakistani bowlers, but not without some good fortune.

Amla scored his 11th ODI century, at a run a ball, and De Villiers brought up his 14th career ton after facing 87 deliveries, smashing 11 fours and two sixes. With their hundreds under their belts, they pelted the bowlers all over the ground but, immediately after reaching the monumental 238-run milestone, Amla spooned a simple catch to extra cover and was out for 122 off 113 balls, including nine fours and one six.

De Villiers departed shortly afterwards for 128 from 108 deliveries, with 12 fours and three sixes.

Faf du Plessis played a cameo innings, scoring 45 off only 19 balls. Once again, Irfan was the pick of the bowlers, bagging two for 34 off seven overs, while Riaz took two for 93, grabbing the wickets of Amla and Du Plessis. – Sapa