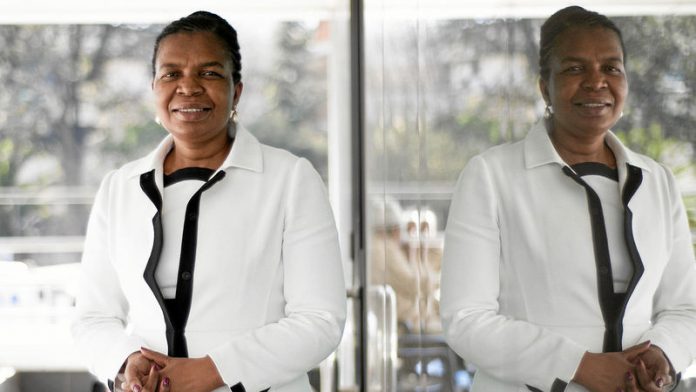 The acrimonious relationship between the South African Broadcasting Corporation board and Communications Minister Dina Pule played itself out in Parliament a few minutes before the parliamentary committee dissolved the SABC board on Tuesday.

An interim board made up of five members was appointed although the opposition didn’t support the appointment of this interim.

The acting board will be chaired by Ellen Zandile Tshabalala. Other members are Noluthando Gosa who resigned from the board early this week, former ANC MPL Vusumuzi Mavuso, economist Iraj Abedian and Ronnie Lubisi.

The oversight committee wanted Pule, who is the sole shareholder of the SABC and the board to explain the mayhem at the corporation.

A blame game ensued as Pule pointed fingers at the outgoing board members but the sole director who attended the meeting, Suzanne Vos, fought back and accused Pule of politically interfering with the work of the SABC.

While at each other’s throats, they seemed to agree on one thing: the outgoing board chairperson Ben Ngubane was at the centre of the SABC’s problems.

Problematic
In her presentation, Pule listed a range of issues which she found problematic with the SABC board.

Among these were board members discussing board issues in the media; failure to attend meetings with her; failure to follow due procedure in appointing senior managers; and refusal to hand over a special investigations unit (SIU) report.

“There was so much in the media that was not supposed to be discussed in the media, but in the boardroom of the SABC. It showed to us that there was a breach of corporate governance.

Despite raising her concerns with the board on numerous occasions, through the bilateral meetings and asking them to desist from making public their discussions, they continued to speak to the media.

Pule decried the board’s refusal to give her the original copy of the SIU report, but a file with a legal summary of the report.

“We still do not have the SIU report. The SIU investigations were requested by the former minister, [Roy Padayachie] and the report should have come to the minister.

"The report shouldn’t have gone the SABC but to the minister. It was a bit odd that the report was sitting with the SABC, while the report is supposed to be talking about them as SABC.”

Interference
Pule rejected accusations made in the media by former board member Cedric Gina, who accused her of interfering with the running of the SABC board.

“There was a point that I wished I could interfere and go to the SABC and say ‘what you are doing is wrong’, but I didn’t. If I had interfered, may be some of the things wouldn’t have happened. Actually, I really wish I had interfered,” she said

Pule also denied that she had begged Ngubane and Thami Ka Plaatjie to withdraw their resignations, saying she had heard from the media they had resigned. She then called them to a meeting “to understand why they have resigned”.

“At the heart of the crisis is the ministerial interference in board decision-making and the functioning of the SABC which has become extremely problematic,” she said.

Vos specifically cited “unilateral decision-making” by Ngubane, which had previously been brought to the attention of the parliamentary committee.

“For too long, board members and some who have resigned along the way since 2010 have strenuously objected to various decisions taken by the chairperson [Ngubane] without the approval of the board.

“Time and again, Dr Ngubane acted illegally … and by way of proof of this right up until his recent resignation he attempted to overturn a decision taken by the majority of board members in a properly constituted board,” she said.

Vos reiterated an assertion previously made by board members that there was no disharmony or dysfunction among the SABC directors, especially following Ngubane and Ka Plaatjie’s resignations. This was despite the fact that they were not able to hold board meeting to process committee recommendations, she said.

She defended the outgoing board’s record, claiming that it had attempted to be meticulous in identifying corruption, incompetence, indolence and arrogance, which had clearly permeated the corporation in pockets and most certainly by certain individuals. “We worked tirelessly to try to hold executives and management accountable for their actions,” she said.

Trust
However, the board could no long effectively operate effectively and efficiently as it didn’t have Pule’s support, she added.

“It would appear that the minister does not trust this board and has of late seemed to have been openly contemptuous of our perfectly legal decision-making pertaining to various matters.”

Vos announce that she was “honour-bound” to also tender her resignation.

On Tuesday afternoon, the National Assembly passed the committee’s resolution to appoint an interim board, which can only be in place for a maximum of six months.

President Jacob Zuma appoints the board.