Pope meets his predecessor for first time in history 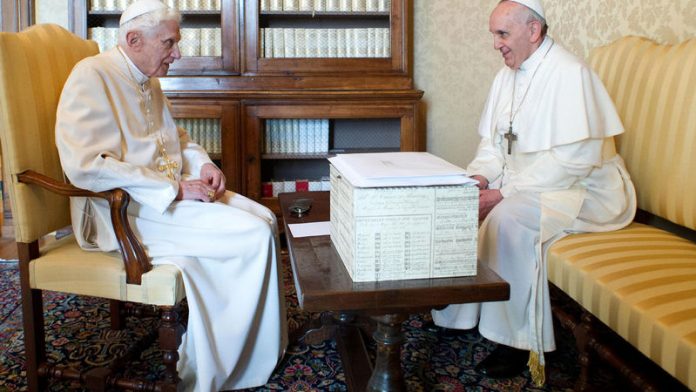 The meeting will mark the the first time a pontiff has met his predecessor.

The talks round off a historic few weeks for the Roman Catholic Church after Benedict became the first pope to resign in over 700 years and only the second to do so by choice in 2 000 years.

The last pope to resign – Celestine V in 1294 – was locked up and perhaps killed off by his successor Boniface VIII and there is no record of the two ever meeting post-resignation.

Highlighting the unusual nature of the encounter, both men are expected to wear white papal vestments since Benedict has been allowed to continue wearing his pontifical robes as well as using the title "Your Holiness".

Cardinals in a conclave in the Sistine Chapel last week elected Francis as his replacement – Latin America's first pontiff and the first non-European pontiff in nearly 1 300 years.

The Vatican said Benedict followed television news coverage of Francis's election from Castel Gandolfo, the lakeside residence where he has been staying ever since he stepped down.

The talks are private and the Vatican has said very little is likely to emerge about their content – with any number of urgent issues for a troubled Roman Catholic Church possibly on the agenda.

Francis's helicopter was seen landing near the palace, which has been the papal summer residence for centuries.

The Vatican said Benedict was there to greet Francis along with household staff and that the two would have lunch.

The two men – Francis is 76 and Benedict is 85 – have very different styles but important core similarities on matters of doctrine and ways forward for the Church after Benedict's often troubled eight-year pontificate.

Francis has paid homage to Benedict and has called him twice since becoming pope.

A simple pilgrim
Analysts say he will rely heavily on the theological legacy of the former pope.

Benedict, before he stepped down, pledged allegiance to whoever his successor might be.

The two leaders of the world's 1.2-billion Catholics are both preoccupied with issues ranging from rising secularism in Western countries, to the reform of Vatican bureaucracy, to the ongoing scandal of clerical child abuse.

The two could also discuss "Vatileaks" – a scandal that broke last year over the leaking of hundreds of confidential papal documents that revealed allegations of intrigue and corruption inside the secretive Vatican.

Benedict has said he will live "hidden from the world" as a "simple pilgrim" on life's last journey and is expected next month to move back and live in a former nunnery on Vatican grounds in a life of quiet contemplation and academic research.

But the Vatican has said he could also provide "spiritual guidance" to his successor.

Benedict is living temporarily in Castel Gandolfo with his secretary Georg Gaenswein – who confusingly is also the head of his successor's papal household – and with the four housekeepers who looked after him when he was still pope.

At the 2005 conclave, Bergoglio was the main rival to Joseph Ratzinger, the future Benedict XVI, and represented a more socially progressive current among the cardinals but reports at the time indicated that he pulled out of the race.

While Ratzinger was reserved in public, Bergoglio is more spontaneous and people-friendly and has shunned some of the trappings of papal office.

Ratzinger was more a follower of tradition and never liked innovation.

More direct style
But the two are very alike on doctrine and several of Francis's remarks in the first days of his papacy have been borrowed from his predecessor.

Both are opposed to gay marriage, abortion and euthanasia – which Catholic believers considers a form of interference with God's "creation".

Francis's popularity is being seen with bitterness in some quarters in the Vatican where the memory of Benedict still shines strongly, unlike for many ordinary Catholics who have said they prefer the new pope's more direct style.

When he takes up residence in the Vatican, Benedict will be just a stone's throw from Francis – an unexpected and delicate situation for the Church.

"This papacy will be rooted in Benedict's teachings," Samuel Gregg from the US-based Acton Institute religious think tank said earlier.

"For the past 25 years, he has been the main intellectual force in the Church," he said.

But at least for some people, Benedict is already being written out of the record.

Postcards on sale around the Vatican in recent days show a smiling Francis next to a picture of the ever-popular John Paul II – with no depiction of the pope in between, Benedict. – Sapa-AFP.