Bangui is no stranger to armed revolt

Life is starting to return to normal in Bangui, the capital city of the Central African Republic.

Markets have reopened, as have some of the shops, following a four-day period when most people stayed indoors. By Wednesday morning, Bangui residents told the Mail & Guardian that the sound of gunfire was becoming increasingly rare, and ­people had started venturing out to buy food and other necessities.

Differing rumours have been circulating about the fate of South African National Defence Force soldiers, including claims on the ground that the official death toll is higher than the 13 named by the military.

The regional peace operation in the country, the Mission for the Consolidation of Peace in Central African Republic, took charge of ensuring the safety of the South Africans and moved them from their base at the national police school in Bangui to the military installation adjoining M’Poko International Airport, which French troops secured at the weekend.

Soldiers belonging to rebel group Seleka and the Multinational Force of Central Africa patrol the streets in an attempt to control looting. Whatever the actual death toll and the real reason for deploying South African troops turn out to be, their presence left few people feeling indifferent.

The end might not have come so quickly for President François Bozizé had the South Africans gone home when the peace accords were signed in Libreville in January. It was clear then that Seleka leader Michel Djotodia would not tolerate a South African army presence on Central African soil.

When Seleka and the South African forces finally did clash, Sudanese refugee Thomas Taban was witness to the battle. Taban has been living in the city for more than two decades and is no stranger to armed revolt in both his adopted home and the place he comes from – South Sudan. Watching the battle from near the safety of his home, Taban says the rebels encountered almost no resistance except from the South African soldiers. He says as soon as the rebels fired their first shots, government soldiers of the Central African Armed Forces, the FACA, fled in a panic in all directions, whereas the South Africans stood their ground.

Permanent quarters
Another Bangui resident said there wasn’t a FACA soldier in sight. He had barricaded himself and his family in his house, out ventured on to the streets to go to his place of work on Wednesday.

Elements of the FACA may eventually be incorporated into the new army that self-proclaimed president Djotodia is likely to form. The rebel leader has already brought several members of the former Bozizé government into his administration, including the former minister of communications, who is now his spokesperson. 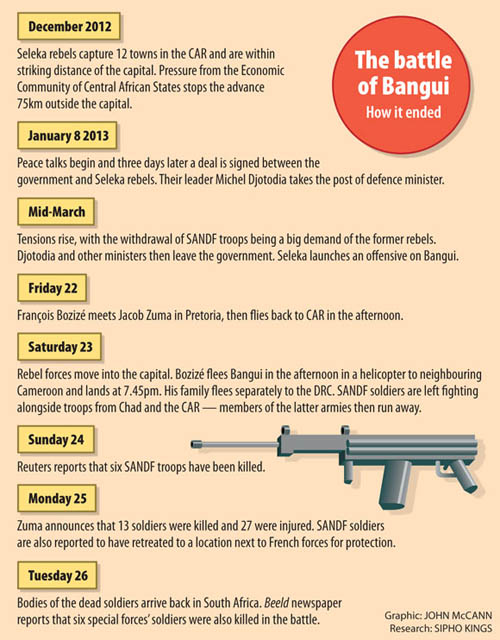 Bozizé was not the only official to flee the country, however – a number of senior and middle-ranking civil servants are reported to have either crossed into the Democratic Republic of Congo or into Cameroon, where their former boss is temporarily living, allegedly while waiting for permission to move to more permanent quarters, possibly in South Africa. Some of Bozizé’s senior associates are currently in the country.

But looting and the occasional gunshot won’t keep Bangui’s residents off the streets – such occurrences are far too common. Even the largest shops in the centre of town, supermarkets run for the most part by Lebanese and Portuguese locals, rarely carry much in the way of stock. The combined concerns of pillaging and the extremely weak purchasing power of Bangui’s population make for a difficult business climate.

Supermarkets, even in the worst of times, still stock items such as French cheeses and Portuguese wines, but the clientele for such delicacies tends to be limited to the relatively large numbers of international civil servants working for the various United Nations agencies in the country, members of the diplomatic community and, up until very recently, the privileged members of the Bozizé administration.

M’Poko International Airport has reopened, but even at its busiest it has never been much of a regional hub – the easiest way in and out of the Central African Republic is either through Nairobi or Paris, courtesy of Kenya Airways or the weekly Air France flight.