Central African Republic: Is this what our soldiers died for?

South African military involvement in the Central African Republic has from the start been entwined with ANC-linked deals, raising questions about the motivation for the disastrous deployment of South African troops to the troubled country.

The figure at the centre of the web is the politically connected businessperson and fixer Didier Pereira.

Pereira is currently partnered to the ANC security supremo and fundraiser, Paul Langa, and former spy chief Billy Masetlha. Their group has initiated several business projects in CAR, including some involving diamonds

Previously, he partnered with ANC hard man Joshua "General" Nxumalo and the ANC funding front, Chancellor House, in an initiative that involved security and attempts to gain a diamond export monopoly in the CAR.

Pereira, originally from Congo-Brazzaville, is a special adviser to the recently toppled CAR president, François Bozizé.

He has maintained business ties with powerful ANC security and intelligence figures during both the Thabo Mbeki and Jacob Zuma presidencies.

Although the ANC figures who Pereira does business with has changed between presidencies, the nature of his dealings have remained consistent.

Bozizé Jnr does not appear to have got what he came for because of South Africa's statutory weapons trade controls, but Pereira's reported role as a facilitator of this key meeting is noteworthy.

A CAR diplomat in Pretoria, who did want to be named because of the fluid political situation back home, said that Pereira had lived in South Africa for "more than 20 years" and that he was a recognisable figure among embassy staff.

He also previously partnered with a notorious Zimbabwean arms dealer, John Bredenkamp, according to sources with a detailed knowledge of the central African region and company searches in South Africa.

Other South African-linked interests in the CAR include the Canadian-based gold exploration and mining company, Axmin. Its president and chief executive, George Roach, was also associated with UraMin, a politically well-connected uranium prospecting company, which is said to have enjoyed Thabo Mbeki's backing when it won a concession in the CAR.

The concession was later sold to the French nuclear multinational, Areva.

The oil exploration company, DIG Oil, which also enjoyed Mbeki-era political support, has an oil concession in the south west of the country.

To the rescue
Bozizé's rule of the CAR has been precarious after he toppled his predecessor, Ange-Félix Patassé, in a coup in 2003, which was condemned at the time by both Mbeki and his then-deputy, Zuma.

Bozizé won an election in 2005 that excluded Patassé from the ballot, but his grip on power was soon threatened by Patassé-linked rebels. As Bozizé's military situation worsened, he sought help from South Africa.

A joint South African Defence Force (SANDF) and defence department "fact-finding mission" went to the CAR in January 2006. A flurry of diplomacy between Pretoria and Bangui in April that year culminated in the then-defence minister, Terror Lekota, signing a co-operation agreement in defence, minerals and energy at the end of that month, which he followed up with an "onsite assessment" trip to the CAR in May. 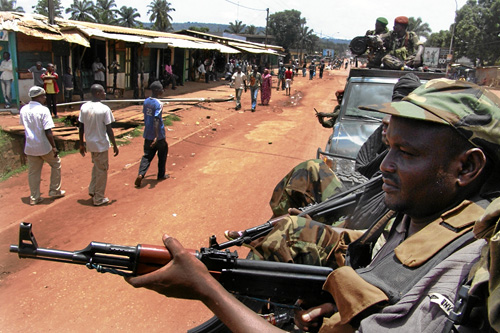 Troops and civilians still in the country are in danger of revenge attacks. (AFP)

Pereira was quick off the mark. On May 18, a week after Lekota's return, he signed a memorandum of understanding with the CAR mining ministry. It envisaged the creation of a public-private partnership, Inala Centrafrique, according to documents of Inala and its business partners, which were obtained by the Mail & Guardian.

ANC stake
Inala Centrafrique was formally registered in August 2006. Over time, its shareholding was settled at a 35% stake for the CAR government and 65% going to a South African company, Serengeti Group Holdings. The latter was majority-owned by Nxumalo, whose notoriety during the ANC underground days was underscored by his part in the Virodene vitamins-for-Aids scandal.

An Inala Centrafrique business proposal to the CAR government, dated July 6 2007, retrospectively confirmed that “the joint venture is a culmination of the accord signed by both … Mbeki … and Bozizé … during the meeting of the governments in South Africa in … 2006 for the two countries to work together.”

It identified Nxumalo as chief executive and Pereira as chief operations officer.

While this deal was being hammered out behind the scenes, South Africa signed a formal, five-year defence co-operation agreement with the CAR on February 11 2007, involving both the deployment of South African troops and the provision of military equipment.

Zuma renewed the agreement in December last year, on the grounds of which, in the face of the growing crisis, he ordered a reinforcement of troops to the CAR in January this year.

Diamonds and arms
The Inala Centrafrique joint venture between the CAR government and Pereira, Nxumalo and the Chancellor House Trust was primarily a mechanism to buy diamonds from the CAR's small-scale miners.

But the plan had two other elements, which, if implemented, would give Inala and its ANC-linked shareholders total dominance of the CAR's diamond market.

The first was an initiative to create and equip, on behalf of the state, a police des mines, or mining police, to combat illegal diamond dealing. 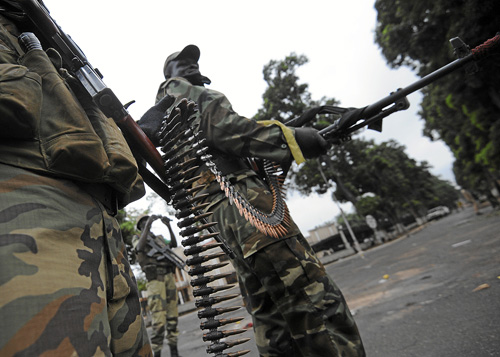 Seleka troops hold their position near the presidential ­palace in Bangui soon after the coup. (AFP)

The second element, it appears from the documents and an interview with a would-be Inala business partner, was for Inala to be granted an export monopoly by the CAR government.

In other words, although its majority shareholding was privately held, Inala would have been endowed with part of the form and function of a state agency: a national diamond exporter with an associated police enforcement arm.

Dividends of more than $800-million over 10 years were envisaged.

In a further example of the conflation of South African state and ANC party interests, a Serengeti subsidiary partnered with a South African armoured vehicle business, Mechanology, in September 2007 to revamp decommissioned armoured vehicles that the SANDF had offered to donate to Bozizé.

The armoured vehicle deal broke down, apparently because there was a dispute over who would pay for the refurbishment.

Inala's attempts to control the CAR diamond mining industry fizzled out by March 2008.

New ANC partners
By then, the Zuma-linked faction of the ANC's security and intelligence apparatus appears to have inherited the relationship with Pereira from Serengeti.

At about the same time that Serengeti dropped the ball on the armoured vehicles and the Inala diamond deal collapsed, a company called Bagamoyo Investment Holdings was formed with Pereira as a founding director.

Chief among Pereira's co-directors in Bagamoyo is Langa who, like Nxumalo before him, comes with a heavy-hitting ANC security and intelligence pedigree, but also with strong whiffs of controversy.

He was suspended and later dismissed as chief executive of the Robben Island Museum after a forensic audit found a R25-million hole in the company accounts back in 2008.

Langa was head of security co-ordination at ANC headquarters in the late 1990s. His Zonkizizwe group of companies appear to perform both security and fundraising functions for the ANC.

Other directors in Bagamoyo included:

Masetlha confirmed that Baga­moyo was set up to exploit opportunities in CAR.

Masetlha said: "Our role was to try and engage South African business persons to invest in the area. Pereira happened to be one of the people who knew CAR well. I agreed to get involved and spoke to Paul []."

Masetlha, who is recovering from a long illness, said he was hazy about the details but added that Lazarus Mbethe was brought in as well, because of his business acumen.

Masetlha, Pereira, Langa and Mbethe appear as directors in two other shelf companies, Evening Star Trading 665 and Universal Pulse Trading 117, both set up in November 2006.

Mbethe is heavily involved in mining. He was part of the Pitsa ya Sechaba consortium that partnered with Chancellor House and the Russian company, Renova, to form United Manganese of Kalahari, which controversially got manganese rights in Northern Cape. 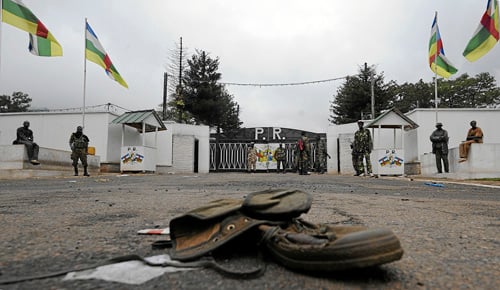 Masetlha said he and his partners were trying to get involved in stabilising the country through development. Projects he recalled included the refurbishment of a hotel, which is understood to have been the Oubangui Hotel, with which Pereira has also been associated.

He confirmed Langa had been "there on the ground" frequently – "he's been in and out" – and had concerned himself particularly with security issues.

Most significantly, Masetlha confirmed the group had an interest in diamonds from the region and had owned a barge to be used for alluvial diamond mining somewhere upstream on the Ubangi River where the group had a diamond concession.

He said the group had also discussed upgrading some of the main roads and the airport, but little progress had been made because of the instability in the country.

"The problem was security … the SA government got involved in trying to help Bozizé at least beef up his personal protection," said Masetlha.

No comment
Masetlha and another South African businessperson who has contact with Pereira independently supplied the same cell number for him.

When the M&G contacted the number and asked for Pereira, the man who answered the phone said he was Pereira. But when the M&G identified itself and indicated it wished to talk about the CAR, the person who answered said it was a wrong number. He refused to give his name and hung up.

Mbethe said he was in a meeting and then hung up the second time the M&G phoned him.

Robertson said he was not involved in Bagamoyo and referred questions to Langa.

Attempts to contact Langa by phone were unsuccessful. Written questions faxed to him at his request were unanswered at the time of going to press.

A spokesperson for the presidency was unavailable to comment.