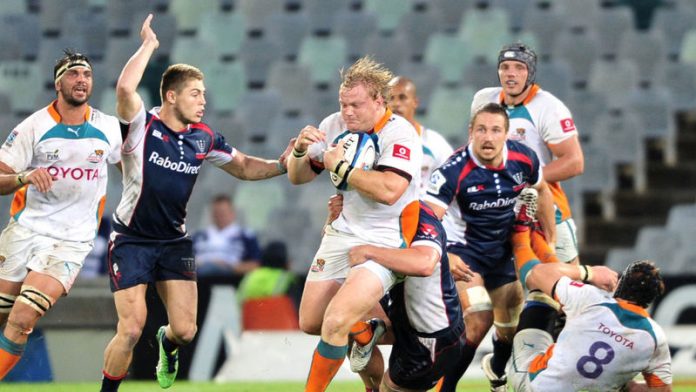 The visiting Australian side were still in the game when they trailed 10-6 at halftime, but could not cope with the home side's running and intensity after the break.

The Cheetahs crossed the line five times, to collect a try-scoring bonus point for the first time this season, as they exposed the Rebels out wide, with all of those scores coming from the backs.

The result also continues their dominance over Australian sides in this year's competition after back-to-back wins on the road against the Waratahs and Western Force.

"There were a lot of errors and mistakes, but we are very happy with the win. The guys have been very positive and we are very excited about this year," Cheetahs captain Adriaan Strauss said in a TV interview.

"It's a great team environment at the moment, but it is a long season and we have a long way to go."

After an error-strewn opening, the Cheetahs were the first to get on the scoreboard when Burton Francis kicked a penalty for the home side on 13 minutes after the Rebels were penalised for offside.

James O'Connor drew the visitors level with a penalty of his own after Cheetahs winger Willie le Roux committed the same offence.

The Melbourne-based side took the lead with another penalty by O'Connor, again for offside, as the rain pelted the players and made ball-handling difficult.

The Cheetahs eventually found continuity in attack just three minutes before the interval.

The Rebels had a scrum on their own 22-yard line, but a careless flick from the base of the set-piece saw the Cheetahs turn over possession.

With the visitors scrambling to get their defensive line in shape, the ball was spread wide and Johann Sadie timed his pass to Hennie Daniller perfectly for the fullback to dive in at the corner.

The Cheetahs extended their lead through Raymond Rhule, who showed great pace to finish after centre Robert Ebersohn set him free with a flick pass after beating two defenders.

The home side were starting to dominate when Strauss collected the loose ball after an up and under and showed great hands to send winger Willie le Roux away for his second try of the season and the Cheetahs' third of the day.

The Rebels' cause was not helped when lock Luke Jones received a yellow card for obstruction on Le Roux with just over 10 minutes to play and the Cheetahs exploited the extra man.

They picked up their bonus-point try just seconds later as Sadie crossed in the corner after more excellent work from Strauss.

He bulldozed his way towards the try line and with the Rebels scrambling, the ball came out to Francis and his long pass was picked up by the winger for the easy score.

Rhule turned provider for the Cheetahs' fifth score, his skip-pass giving winger Ryno Benjamin the opportunity to slide in at the corner as the Rebels defence disintegrated.

The Rebels got a consolation try at the death, Cadeyrn Neville going over the line after sloppy play from the Cheetahs as they spilled a line-out just yards out.

The Rebels forward had the easiest of run-ins as he picked up the loose ball and dived over the line.

"It was a big improvement on last week and for 60 minutes we were in the game. Credit to the Cheetahs, they are a fantastic attacking team and if you give them as much ball as we did, they will punish you," Rebels captain Gareth Delve said.

The Cheetahs provisionally move up to fifth in the standings with 18 points while the Rebels are nine points adrift in 13th with two matches of round seven still to be played. – Reuters