Liverpool come from behind to beat Aston Villa 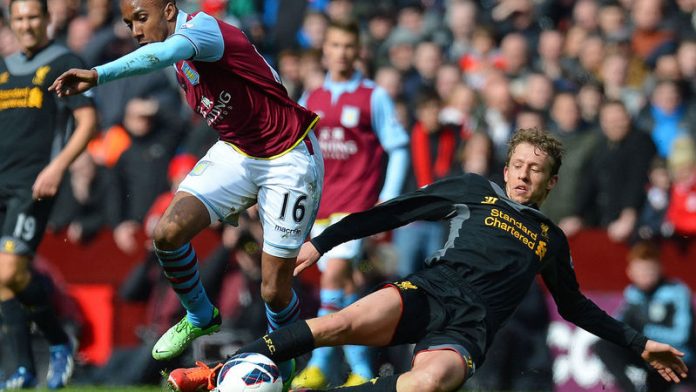 LIVERPOOL COMES FROM BEHIND TO BEAT VILLA 2-1

Villa, who are now third from bottom with seven games to play, took a halftime lead thanks to Belgium striker Christian Benteke's 14th goal of the campaign but Jordan Henderson started Liverpool's comeback with an equaliser in the 47th minute.

Luis Suarez then tumbled in the area under a challenge from Nathan Baker 13 minutes later and Gerrard converted the spot-kick into the bottom corner to keep Liverpool five points behind fifth-place Arsenal, who occupy the final European position.

Liverpool will require an almost-perfect end to the season, and for a few of the teams above them to slip up, to qualify for either the Champions League or Europa League next season.

"Sometimes you can let the season fizzle out but we don't want to do that," said Gerrard, who now has 98 goals in the Premier League. "We want to see if we can nick fifth or sixth in the table."

However, the nature of this comeback showed once again that Liverpool, under Brendan Rodgers, is a side on the up after their slow start to the season. This was their fourth win in the past five league games.

"We upped the tempo after the break and we were excellent," Rodgers said. "It is a terrific win for us. Our quality was there for all to see."

The visitors had trouble in the first half coping with Benteke, who enhanced his reputation as one of the signings of the off-season by giving Liverpool's defence a torrid time and capping it with a well-taken goal in the 31st minute.

Gabriel Agbonlahor cushioned a long ball over the top with his right thigh into the path of his strike partner, who volleyed low past Pepe Reina for his ninth goal in 11 league games.

Agbonlahor earlier had a great chance saved from point-blank range by Reina but Liverpool were always dangerous at the other end, with goalkeeper Brad Guzan twice denying Suarez.

The cutting edge arrived immediately after the break, with Philippe Coutinho finding the sprinting Henderson with a defence-splitting pass and the midfielder finished into the corner. Coutinho has now scored or assisted in all six of his appearances since joining from Inter Milan in January.

Liverpool wer rampant over the next 15 minutes, Coutinho shooting wide when clean through and Glen Johnson hitting the post with a deflected shot before Suarez was brought down by a clumsy sliding tackle from Baker. Guzan dived the right way for Gerrard's low penalty but couldn't keep it out.

Gerrard needed to produce a flying header to clear Benteke's header off Liverpool's line in the 65th minute to preserve the lead.

"I was glad to get on the scoresheet with the penalty but the header at the other end probably won us the game," Gerrard said.

Wigan's 1-0 victory against Norwich on Saturday dropped Villa into the relegation zone on goal difference.

"We are playing well enough to win and I certainly have the belief that we will be fine," Villa manager Paul Lambert said. "We had chances and we didn't look like a team down there at the bottom." – Sapa-AP