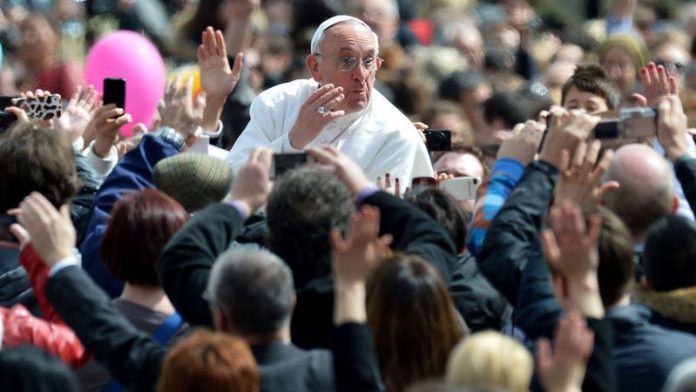 In his "Urbi et Orbi" (to the city and the world) message, he also appealed for a resumption of peace negotiations between Israelis and Palestinians, an end to the civil war in Syria and political solutions to conflicts in several African countries.

The former Cardinal Jorge Bergoglio of Argentina, who has made defence of nature an early hallmark of his pontificate, also condemned the "iniquitous exploitation of natural resources" and urged everyone to be "guardians" of creation.

Francis delivered his message from the central balcony of St Peter's Basilica – the same spot from where he first appeared to the world as pope after his election on March 13 – to a crowd estimated by the Vatican at more than 250 000.

"Peace in Asia, above all on the Korean peninsula: may disagreements be overcome and a renewed spirit of reconciliation grow," he said, speaking in Italian.

North Korea said on Saturday it was entering a "state of war" with South Korea. Tensions have been high since North Korean leader Kim Jong-un ordered a third nuclear weapons test in February, breaching UN sanctions and ignoring warnings from North Korea's sole major ally, China, not to do so.

People thronged the open Jeep that carried Pope Francis around at the end of a Mass. He stopped to accept a jersey with his "Bergoglio" name on it from fans of an Argentine football club and to comfort a handicapped man.

Francis, who has brought a more simple and personal style to the papacy, said the message of Easter is that faith can help people transform their lives by letting "those desert places in our hearts bloom".

Guardians of creation
"How many deserts, even today, do human beings need to cross?! Above all, the desert within, when we have no love for God or neighbour, when we fail to realise that we are guardians of all that the creator has given us and continues to give us," he said.

Earlier, at a Mass in a square bedecked by more than 40 000 plants and flowers, he wore relatively simple white vestments, as opposed to his predecessor Benedict, who preferred elaborate robes.

The huge crowd spilled out of St Peter's Square and into surrounding streets. They included many who had come to see a pope counted on to rehabilitate a Church marred by scandals to do with sexual abuse of children and allegations of corruption.

"It's a new pope and new beginning," said Tina Hughes (67) who came to Rome with her family from Nottingham, England to see the pope. "I think he brings something special. He connects with people. I feel good about him."

Francis, who took his name in honour of St Francis of Assisi, who is revered as a symbol of austerity and the importance of respecting nature, said the world was "divided by greed looking for easy gain". He condemned human trafficking and violence linked to drug trafficking.

Easter Sunday, the day Christians believe Jesus was resurrected from the dead three days after his crucifixion, was the culmination of four hectic days of activity for the pope, during which he instituted several novelties.

On Holy Thursday, two women were included among the 12 people whose feet he washed and kissed during a traditional ceremony that had previously been open only to men.

Francis again showed on Sunday that he would carry out his papal duties his own way. The Vatican had prepared a list of brief Easter greetings for him in 65 languages – identical to those read by his predecessors – but he decided not to read them, and spoke only in Italian.

Instead of moving into regal papal apartments, he is still living in the Vatican guesthouse where he stayed during the conclave that elected him as the first non-European pope in 1 300 years. – Reuters