ANC: M&G is ‘pissing on the graves’ of dead CAR troops 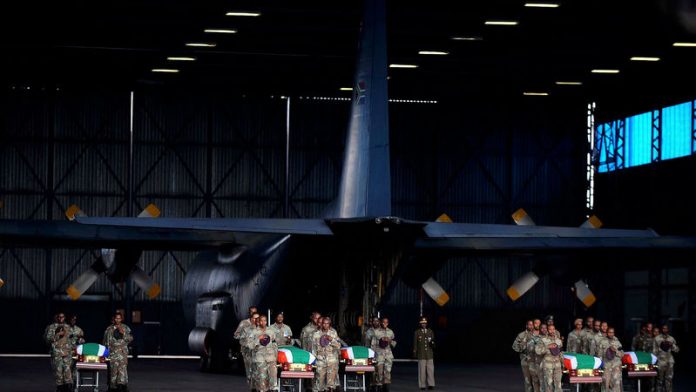 The ANC on Monday accused the Mail & Guardian of damaging and malicious reporting, "calculated to damage the image of the ANC and to sow distrust in noble decisions of the South African government that derive from public and transparent policies", and said it was considering legal action.

The party also said the paper was "pissing on the graves of gallant fighters who put their lives on the line in service of our country and our continent".

"Given the seriousness of this accusation, we will consider all options at our disposal including approaching the courts of law for recourse and to honour those who are fallen whose sacrifice has been rubbished by the Mail & Guardian," the ANC said in a statement dated March 28.

That comes in response to an article in Thursday's edition of the paper, which linked fixer Didier Pereira and his business projects in the Central African Republic (CAR) with the decision to deploy troops to that country.

"What is most disturbing with the accusation are blatant lies that suggest that a company linked to the ANC has business interest in CAR," the party said. "We have established that the said company has no business activity in CAR. While their accusation is false, we believe that South Africans have a right to do business anywhere in the world including the continent of Africa."

No business interests
​The newspaper on Thursday reported that Pereira had facilitated both meetings between South Africa and the CAR and the creation of Inala Centrafique, a public-private partnership that would involve ANC funding vehicle Chancellor House. Though that link is based on share registers, the ANC on Monday said "the ANC as an organisation does not have business interests in CAR".

M&G editor-in-chief Nic Dawes said on Monday the paper stood by the article, which was based on documentary evidence and on-the-record sources.

"What would really dishonour the dead would be failing to question why they were sent to the CAR in the first place, and why they were left there in deteriorating circumstances," Dawes said. "Those questions have not been answered satisfactorily at all, and we will continue to attempt to give South Africans an explanation, to the extent that such an explanation is not forthcoming or plausible from either government or the ruling party."

The ANC's response came five days after publication of the article, and only a short while after the opposition Democratic Alliance announced it would call on Parliament to force the withdrawal of South Africa's troops from the CAR. The ANC said it intended to distribute the statement on Thursday, but experienced technical trouble with an email service provider, which caused the email to be delivered only on Monday.