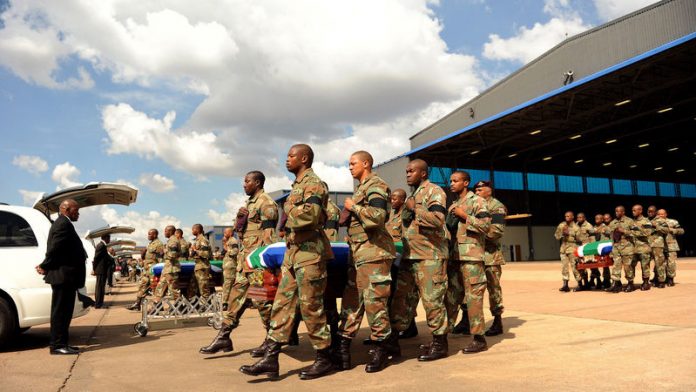 The Democratic Alliance (DA) neatly exploited a news lull on Monday's public holiday to call for the withdrawal of South Africa's troops from the Central African Republic (CAR), saying it would urgently demand that Parliament force President Jacob Zuma to do so.

The troops were "deployed to defend the faltering and dictatorial" regime of now-deposed president François Bozizé, the party said, possibly to "protect the interests of politically connected business people". So it would submit a draft resolution to Parliament, while it was in recess, to demand the withdrawal of troops.

"Given the continued controversy surrounding the deployment, the lack of a clear mandate for our troops to remain in the CAR, the continued risk to the soldiers' safety, and rumours that [the South African National Defence Force (SANDF)] is considering a 'revenge' mission into the CAR, we believe the entire SANDF presence should be withdrawn immediately," the DA said in a statement.

But it is possible that no South African troops remain on CAR soil.

On Monday several sources reported, second-hand, that the remainder of the besieged Bangui contingent had been moved across the Ubangi River, just south of Bangui, into the Democratic Republic of Congo (DRC).

It was not made clear whether such a move – which the defence force would neither confirm nor deny – amounted to a withdrawal, or if the decision was made to regroup and resupply exercise, with a view to launch an attack on the now rebel-held Bangui. But fresh equipment and troops have apparently been airlifted from South Africa to the DRC in recent days.

Intervention
Zuma was due to attend a summit of the Economic Community of Central African States (Eccas) this week along with several ministers, including Defence Minister Nosiviwe Mapisa-Nqakula, on Wednesday. That summit was expected to reach a decision on what kind of intervention, if any, the regional body would support.

Representatives of Bozizé and his deposed government have been lobbying for military action to retake the capital.

The DA's call for action by Parliament on Monday was somewhat reluctantly supported by the South African National Defence Union, with its national secretary, Pikkie Greeff, calling the party "Johnny-come-latelies" on the issue.

"We support any action on a higher level to bring back the troops, but we don't see why it needs to go to Parliament," Greeff said. "The president should be able to make that decision based on his own ethics."

Greeff said the union was still considering legal action to have the ongoing deployment of troops in the CAR declared illegal, if there still was any such deployment, including the massing of troops across the border. It would not support any deployment not undertaken under the auspices of either the African Union or the United Nations.