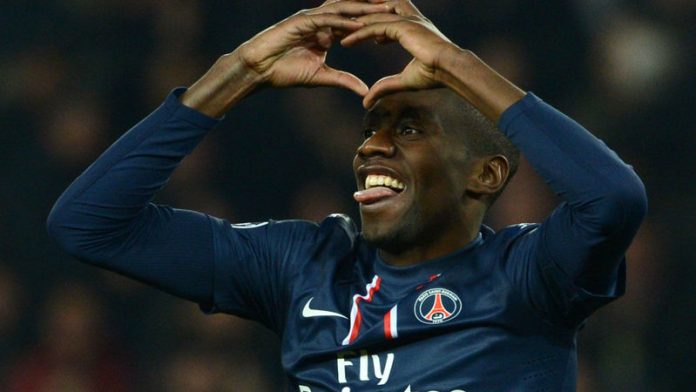 Barca went in front seven minutes before halftime when Dani Alves produced an exquisite pass with the outside of his right boot straight into the path of Lionel Messi who drove the ball in with his left foot from an acute angle.

World Player of the Year Messi then sustained a hamstring injury and had to go off at halftime, replaced by Cesc Fabregas.

Zlatan Ibrahimovic gave PSG a lifeline when he scrambled in the equaliser after a soaring header from Thiago Silva hit the post in the 79th minute.

Xavi calmly restored Barca's advantage from the penalty spot after goalkeeper Salvatore Sirigu rushed off his line in the 89th minute and brought down Alexis Sanchez.

Matuidi then struck with the last kick of the game as his long-range shot eluded the outstretched fingers of keeper Victor Valdes.

Midfielder Matuidi and Barca defender Javier Mascherano were booked and will miss the second leg at the Nou Camp on April 10 through suspension.

David Beckham became the first British player to appear for four different clubs in the Champions League when he was named in the starting lineup.

The former England captain did well in midfield before he was taken off midway through the second half.

Happy Beckham
"I think we deserved a draw tonight," Beckham told ITV Sport. "There's no reason why we can't go there and get a result.

"I was very happy, the manager (Carlo Ancelotti) has always shown confidence in me. Tonight was a big moment for the club – it doesn't get much better than these nights."

PSG, unbeaten at home in all competitions since November 17, went for Barca's throat in the opening stages but were not rewarded for their efforts.

They went close in the fifth minute when Javier Pastore chested an Ibrahimovic pass into the path of Ezequiel Lavezzi who struck Valdes's right post.

Lavezzi wasted another good opportunity five minutes later, shooting straight at Valdes after collecting a brilliant through ball from Lucas.

Pastore then fired a powerful low shot that forced Valdes to dive to his right.

The Spain keeper was at full stretch again as he stopped Ibrahimovic's 20m free kick.

Barca only had Andres Iniesta's curling shot – which went wide – to show for their silky passing as PSG stamped their authority on the game.

Lucas's dazzling runs were a nightmare to handle for Barca but it was the visitors who took the lead.

Messi was in acres of space 12 metres out and he beat Sirigu to notch his eighth goal in this season's competition.

PSG seemed to be running out of steam when Ibrahimovic, looking suspiciously offside when Thiago Silva hit the woodwork, levelled from two metres.

Xavi was coolness personified as he wrong-footed Sirigu from the penalty spot to put Barca 2-1 up but Matuidi sent the crowd wild with delight with his late goal. (Editing by Tony Jimenez)

Buffon could later only parry a Luiz Gustavo effort from 25 metres and Mario Mandzukic was on hand to pass across for Thomas Mueller to net a 63rd minute tap-in, leaving an unusually shaky Juve with a tough ask in the second leg in Turin next Wednesday.