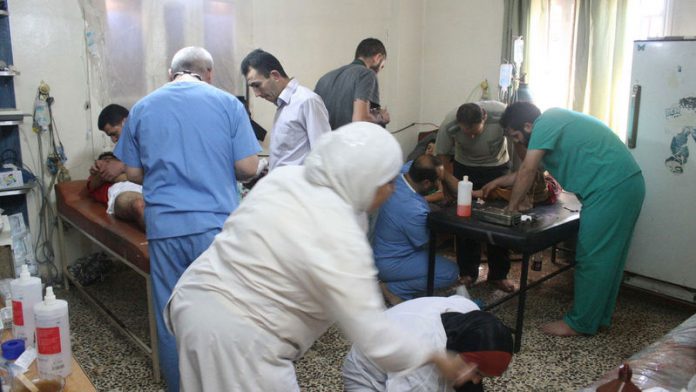 After two years of civil war in Syria, more than 70 000 men, women and children have been killed, according to the United Nations.

Nonprofit organisations from around the world have been flocking to the Syrian border, but many are turned away, as the government of Bashar al-Assad has cracked down on international humanitarian entering the country.

But there are some, including South Africans, who manage to get inside, and make their difference in the war, which began when government forces killed several civilians at a protest for the release of political prisoners.

One of these South Africans is 29-year-old Venessa Naidoo, an anaesthetist who works with Médecins Sans Frontières.

Naidoo, who is currently furthering her studies at the University of Cape Town, has been on missions in Afghanistan and Pakistan under threat of bombs, and in South Sudan, operating out of a tent.

Recently, she spent a few months in the north of Syria, where she worked with a Belgian doctor and two nurses in a makeshift hospital run out of a chicken farm.

"That's not the worst though," she tells the Mail & Guardian. "We used to operate in a cave. But with all the shelling, it became unsustainable to stay in the cave."

Hands-on experience
But she sees humanitarian medical assistance as the "best work" she's ever done.

"The training we get in South Africa is perfect for working in the field," she says.

"When you do your community service in the rural areas, you have to learn to cope on your own. Young doctors often complain about this, but it's this kind of confidence that you need when there's no one to call on for help. A lot of people who train overseas don't get the same hands-on experience that we get."

Naidoo learnt her skills running a rural hospital in Caledon with only two doctor colleagues.

She says that it helps, funnily enough, that South African doctors are used to trauma, such as stab wounds, while European doctors aren't exposed to the same kind of violent injuries.

"Also, in South Africa, we do a lot of obstetrics training, right through our internships and community service. This really helps because as a female doctor, most women in Syria felt more comfortable with a woman in that regard."

Naidoo can't say the name of the city the hospital was in, for security reasons.

Since the government doesn't know they are there, they have to be smuggled in across the border unofficially.

"It's quite a process," she says. "We have to cross from Turkey by foot. On the one side we meet with smugglers who take us over a mountain, through rivers, it's quite a hike. Once we are on the other side, we get fetched by contacts in Syria and then taken to the hospital."

They cannot set up shop at a normal hospital, she says, because government forces still target hospitals, which makes them unsafe.

Winter months
Working on the farm means that during the winter months, the hospital is freezing cold, and impossible to heat because fuel is too expensive and there is no electricity.

Naidoo talks about the types of injuries she saw during the war. "We were working in an opposition-controlled area which was often targeted by government forces," she says.

"The government forces use a form of shelling called drumming, which is where they fill large metal drums with any type of metal they can find, which they drop over the area, and it then explodes in the air or on land. The shrapnel flies everywhere, and they really put anything they can find in those drums. Once I even saw a man with a pair of pliers sticking out of him."

She also regularly sees gunshot wounds from Kalashnikovs and AK-47s, as well as injuries from mortar fire.

It is civilians that she sees most, who are affected by the fighting.

In addition to the war injuries, the high levels of stress means that many more people suffer from heart attacks and anxiety attacks.

Many people also come in with burn wounds, because they are making fires out of wood for the first time in their lives, and for motor vehicle injuries, as people panic on the roads when they see a helicopter overhead.

"I really felt for the women – the men go off and fight but the women are left behind and have to fight to survive and to feed their families. It is difficult to get food or fuel, especially when it is snowing. Lots of them used to farm, but the farms have been destroyed by the bombs. They see helicopters flying over head and they don't know where it's going to drop a bomb, or which way the wind will blow the shell."

She says that many women end up nursing their own family members and even have to carry out amputations. Many have babies at home because they are afraid of going to state hospitals, for fear that their babies will be killed.

Naidoo is also very passionate about the children of Syria. "When I see children come into the hospital, I get angry," she says.

"One day that stands out for me is seeing a truckload of rebel fighters driving down the road, and they were singing and shouting with their Kalashnikovs in the air. Behind them was a stream of children with wooden guns, running after them and cheering them on. It struck me how abnormal that is, but this is what is normal for these four and five-year-olds, who are used to the bombing and shelling. That wasn't my childhood. Kids shouldn't be involved in a war, but they are and there is nothing we can do to protect them."

This type of trauma naturally has its effect on the doctors involved in saving lives.

"Part of the process of dealing with the experience is this, drawing attention to what's happening," Naidoo says.

"We can't stop the war, but access to health is a basic human right. We debriefed all the time – during the mission and after.

"In spite of everything, the Syrian people we worked with were really wonderful people. Even though they are struggling to survive, every other night they would invite us over for supper. They were so grateful that we were there, and the experience was so worth it because there is no one else there for them."