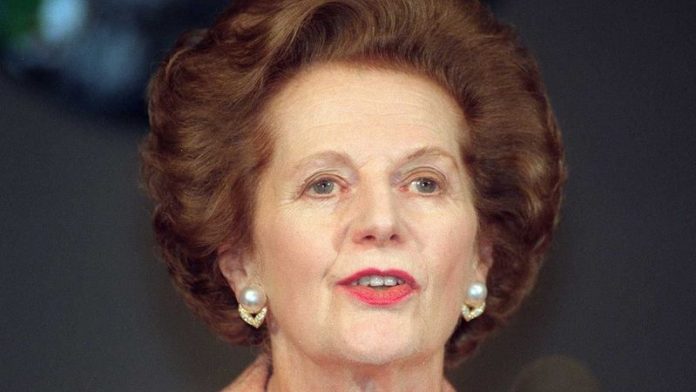 Margaret Thatcher, the "Iron Lady", was a towering figure in British 20th century politics, a grocer's daughter with a steely resolve, who was loved and loathed in equal measure as she crushed the unions and privatised vast swathes of industry.

During her life in politics, some worshipped her as a moderniser who transformed the country, others bitterly accused her of entrenching the divide between the rich and the poor.

The abiding images of her premiership will remain those of conflict: huge police confrontations with the miners' union, her riding a tank in a white headscarf, and flames rising above Trafalgar Square in the riots over an unpopular local tax which ultimately led to her downfall.

To those who opposed her she was blunt to a degree – "the lady's not for turning", she once famously informed members of her own Conservative Party who were urging her to moderate her policies. Others who crossed her path, particularly in Europe, were subjected to withering diatribes often referred to as "handbaggings", named after the black leather bag she invariably carried.

Britain's only woman prime minister, the tough, outspoken Thatcher led the Conservatives to three election victories, governing from 1979 to 1990, the longest continuous period in office by a British prime minister since the early 19th century.

With US president Ronald Reagan, she formed a strong alliance against communism and was rewarded by seeing the Berlin Wall torn down in 1989, though she worried a unified Germany would dominate Europe.

Her radical, right-wing views broke the mould of British politics, changing the status quo so profoundly that even subsequent Labour governments accepted many of her policies.

The woman who became known simply as "Maggie", transferred big chunks of the economy from state hands into private ownership. "The problem with socialism is that eventually you run out of other people's money," she once said.

Her personal credo, founded on competition, private enterprise, thrift and self-reliance, gave birth to a political philosophy known as "Thatcherism".

But her tough economic medicine put millions out of work, alienated many and largely destroyed industries such as mining. Her combative stance antagonised allies in Europe and her intolerance of dissent eventually led to her downfall.

"A brilliant tyrant surrounded by mediocrities," was how former premier Harold Macmillan described her. "That bloody woman," was the less charitable verdict of Edward Heath, another prime minister and her predecessor as Conservative Party leader.

At the peak of her powers, Thatcher's sheer personality made her one of the West's best known figures.

A workaholic, she put in 18-hour days, after which she would relax over a glass of whisky.

Clash with unions
After winning the May 3 1979 election, she launched social and economic reforms designed to end what she saw as a spiral of industrial decline, crippling taxes and intrusive state control, a period under the Labour government that had become known as the "winter of discontent".

After changes to the law and a bitter year-long strike which ended in defeat for the miners in 1985, the days when unions could dictate to British governments were over.

Britain held its breath in 1982 when Thatcher dispatched a naval task force to the Falkland islands, which had been seized by Argentine invaders.

An opinion poll in 1981 rated Thatcher Britain's most disliked prime minister of all time. But, two years later, after the Falklands war, she was swept back to power on a wave of patriotism and in 1987, her third successive election victory gave her another big majority in Parliament.

Privatisaion drive
Thatcher ushered in an era of "popular capitalism" that raised home ownership in Britain to 68% and made one person in five a shareholder.

She launched a sweeping drive to privatise state monopolies such as gas, oil, steel, telephones, airports and British Airways, with electricity and water to follow. But while Thatcherism made many better off, unemployment doubled by the mid-1980s to more than three million – a level not seen since the hungry 1930s.

Opponents said Thatcher had created a nation divided between the wealthier south and the poorer north.

Thatcher developed a close relationship with Reagan, who called her "the best man in England".

It was the Soviet Communist Party daily Pravda that dubbed Thatcher the "Iron Lady", but she revelled in the nickname.

When Soviet leader Mikhail Gorbachev came to power in 1985 however she formed a strong working relationship with him.

After Iraq's invasion of Kuwait in August 1990, Thatcher famously cautioned US president George Bush against being "wobbly" in opposing President Saddam Hussein.

Relations with Britain's European neighbours were strained over her reluctance to embrace plans for closer integration.

She demanded a huge refund on Britain's contributions to the European budget and brought European community business to a virtual standstill until she got it.

The late French president François Mitterrand once said she had "the eyes of Caligula and the lips of Marilyn Monroe".

Narrow escape
In 1984 an Irish Republican Army bomb attack on her Brighton hotel nearly killed her entire Cabinet. She was unscathed, but five people died and some close colleagues were badly injured.

Within hours of the attack, and on schedule, she gave the closing address to her party's annual conference, vowing there would be no weakening in the fight against terrorism.

In 1984 Thatcher and China's then-premier Zhao Ziyang signed a declaration under which Britain agreed to hand over Hong Kong to China in 1997 after 156 years of British colonial rule.

After 11 years in power, Thatcher bowed to a revolt and pulled out of a leadership contest with her former defence minister Michael Heseltine.

A new local tax, known as the "poll tax", which had led to riots, contributed to her downfall. Thatcher retained enough influence to ensure Heseltine did not succeed her, advancing the claims of her protege John Major, who served as prime minister until 1997.

"We are leaving Downing Street for the last time after 11 and a half wonderful years and we are very happy that we leave the United Kingdom in a very, very much better state than when we came here," Thatcher said with tears in her eyes.

She suffered a series of mild strokes in late 2001 and 2002, after which she cut back on public appearances and later cancelled her speaking schedule.

Her decline into dementia was chronicled in the Oscar-winning film The Iron Lady, with Meryl Streep. Cast as bewildered widow, the very lonely Iron Lady was left only with her memories. – Reuters