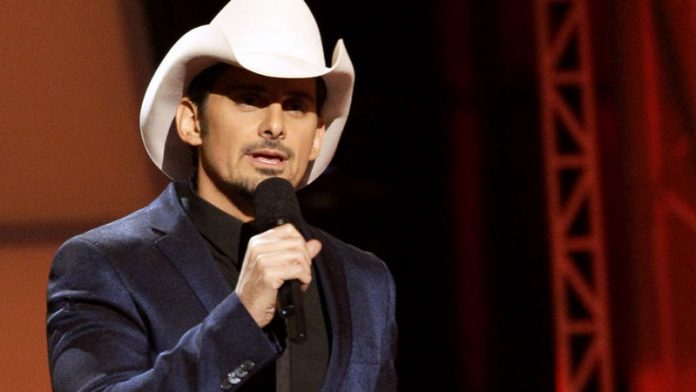 Brad Paisley's collaboration with LL Cool J on Accidental Racist has accidentally kicked up some controversy.

Paisley's publicist says he isn't giving interviews about the song. But the country star known for the white cowboy hat and virtuoso guitar work briefly addressed the debate on Monday night on Twitter when he reposted a radio host's blog entry on the song he felt was thought-provoking.

The song appears on Paisley's new self-produced album Wheelhouse. It's his most ambitious album so far and the progressive message of Accidental Racist is in line with opinions the 40-year-old West Virginia-born singer has expressed before in interviews and songs.

Of the album, Paisley wrote, "I hope it triggers emotions," and says he wouldn't change a thing about it: "This is a record meant to be FAR from easy listening. But fun. Like life. Have a ball, ya'll."

At its heart, Accidental Racist is about how cultural symbols favoured by whites and blacks – the fashion choice of wearing Confederate flags or baggy pants, for instance – come loaded with meaning.

It's not a new discussion. Though race relations have evolved over the decades, cultural symbols continue to colour perceptions.

Paisley uses the Confederate flag as an example in the song, noting whites are "caught between Southern pride and Southern blame" 150 years after the end of the Civil War.

"I try to put myself in your shoes and that's a good place to begin," Paisley sings, "but it ain't like I can walk a mile in someone else's skin/Because I'm a white man livin' in the southland/Just like you I'm more than what it seems/I'm proud of where I'm from/But not everything we've done/It ain't like you and me can rewrite history/Our generation didn't start this nation/We're still paying for mistakes that a bunch of folks made long before we came."

LL Cool J's publicist did not immediately respond to messages. The 45-year-old, who elevated himself from a teen rap sensation on the streets of Queens to an American cultural icon as an actor and personality, provides the response to Paisley's meditations.

He kicks off his portion of the song: Dear, "Mr White Man, I wish you understood what the world was really like living in the hood. Later in the song he raps, I guess we're both guilty of judging the cover not the book/I'd love to buy you a beer, conversate and clear the air/But I see that red flag and I think you wish I wasn't here."

Later he and Paisley enter a call and response portion of the song where LL Cool J raps in part: "If you don't judge my 'do rag, I won't judge your red flag/ If you don't judge my gold chains, I'll forget the iron chains/Can't rewrite history, baby / let bygones be bygones/ Rest in peace, Robert E Lee, I got to thank Abraham Lincoln for freeing me." – Sapa-AP