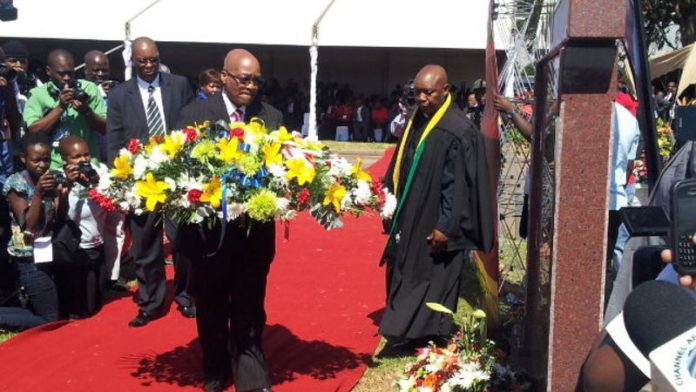 This debt could be repaid by showing commitment to society, Zuma said at a wreath-laying ceremony  on Wednesday at the Thomas Titus Nkobi Memorial Park in Elspark, east of Johannesburg, to commemorate the 20th anniversary of Hani's assassination.

"We must hasten to usher in the type of society comrade Chris lived and died for," Zuma said. "We must honour the memory of comrade Chris by developing a better life for all, that he believed in."

Zuma said it was impossible to see complete change in just 20 years. The damage done by apartheid would be with the country for some time, he said.

"To suggest we cannot blame apartheid for what is happening in our country now, I think is a mistake to say the least.

"We don't need to indicate what it is apartheid did. The fact that the country is two in one, you go to any city there is a beautiful part and squatters on the other side, this is not the making of democracy and we can't stop blaming those who caused it," said Zuma.

Meanwhile, South African Communist Party general secretary Blade Nzimande said on Wednesday that those who killed Hani must tell the truth about who else was involved in the crime or they should rot in jail, on Wednesday.

"We don't want this to happen again," Nzimande said at the wreath-laying ceremony.

Death of a martyr
​Hani, who was SACP general secretary and chief of staff of the ANC's military wing Umkhonto weSizwe (MK), was assassinated outside his house in Boksburg on April 10 1993.

The ANC, the SACP and Cosatu commemorated the 20th anniversary of Hani's death on Wednesday.

Nzimande lashed out at the media for its reporting on Hani. "The media is praising comrade Chris, [yet] this is the same media that was demonising him when he died," he said to loud applause.

"They are praising him today because he is dead. They do it to condemn the current leadership of the SACP," said Nzimande.

They were both sentenced to death, but this was commuted to life in prison when the death penalty was abolished.

"Parole should not be considered until [Derby-Lewis] tells the nation who he collaborated with in the assassination of Hani," Young Communist League spokesperson Khaya Xaba said in a statement earlier on Wednesday. – Sapa