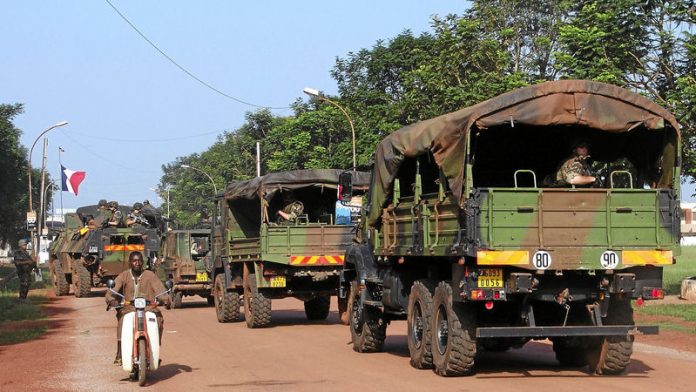 South Africa's involvement in the battle that ­toppled the former president of the Central African Republic (CAR), François Bozizé, has laid bare the country's cold war with France for control of Francophone Africa.

And fallout from the battle of the CAR capital, Bangui, now the subject of official enquiries, may result in that war heating up.

Sources in South Africa now say that the French forces that held the Bangui M'poko airport during the battle denied South African soldiers reinforcements and equipment, including urgently needed mortars and rocket-propelled grenades.

Soldiers were later told those weapons were held up at the airport, apparently because the French did not want to allow such weapons into a "peacekeeping" arena.

At least one soldier with intimate knowledge of the battle believes the presence of those weapons in the field could have saved lives.

South African National Defence Force spokesperson Brigadier General Xolani Mabanga denied claims that the SANDF sent extra personnel, arms or ammunition when the security situation deteriorated in Bangui. However, he said the SANDF found reports that the CAR international airport was under the control of French troops "very strange."

"This implies that they [French troops] will decide what goes in and out of the airport. You have to ask what the role was of the French in that nation."

Legitimate reason
One analyst believes the French may have had legitimate reason to allow the use of the airport for the treatment of South African wounded and the withdrawal of troops while not allowing reinforcements or weapons to flow into the CAR. At the time, a force of about only 200 French troops was holding the airport, as several hundred troops had been moved to Mali.

"The French commander would have known he could not hold the airport against thousands of rebels," the analyst said. "The last thing he'd have wanted to do was to pick a fight."

The new allegations come after previous claims that France had backed the Seleka rebels, ensuring the toppling of Bozizé and South Africa's withdrawal.

Meanwhile, France is now said to believe that South Africa owes it a debt of gratitude for saving SANDF troops by providing medical assistance to wounded soldiers who had taken refuge at M'poko airport. Other unconfirmed reports said French soldiers also assisted in negotiating the release of South African soldiers who had been captured by the rebels.

A source from the department of international relations said there were no plans to thank France.

The French diplomatic source said France believed South Africa was at fault in Bangui last month, saying the country had disrespected the Libreville peace accord signed in January between the CAR government and rebels, which had also called for the withdrawal of foreign troops. "Instead of withdrawing, the South African troops stayed and contributed to derailing the process," said the source.

African solutions to African problems
The tension between the two countries is said to stem from South Africa's foreign policy, which seeks to help fellow African states to rid themselves of their former colonial masters, introduce constitutional democratic rule and develop the economies and infrastructure of the continent. South Africa's path of seeking "African solutions to African problems" is another factor that is displeasing to France, according to top government and international relations department sources.

France was opposed to these policies because a united Africa would render the French presence on the continent irrelevant.

"France has never really left Africa. It does not allow those countries to have decent armies so that it can always have a reason to intervene. South Africa wanted to professionalise the CAR army, but we were blocked from concluding that mandate by France," the departmental source said.

The source said France was behind the unsuccessful plans to foil Nkosazana Dlamini-Zuma's election as chairperson of the African Union Commission.

A diplomat from an African country with good relations with France said Francophone countries in Africa saw South Africa as a potential big brother. "Francophones are getting tired of French intervention, but unfortunately in Africa the only country ready to do the job is South Africa," the source said.

The diplomat said the leaders of former French colonies also felt indebted to France. "All those Francophone leaders were put in power by France. [Denis] Sassou [Nguesso, president of the Republic of Congo-Brazzaville]; Bozizé; [Côte d'Ivoire's president Alassane] Ouattara; and [Chad's president Idriss] Déby. They were helped to chase others, so they may be fearing that it will happen to them too. That is why they are keeping quiet."

At last week's summit in Chad, France was accused of backing the coup against Bozizé, said a Cameroonian source in Yaoundé.

Back and forth
"Behind the scenes, there were accusations and counteraccusations that some world powers were behind the coup. France and Chad were named," the source said.

Kwaku Nuamah, the assistant professor of international peace and conflict resolution at American University in Washington, said France had always seen itself as an African power.

"South Africa is going to bump up against traditional powers in Africa. France, more than other former colonial powers, is still deeply involved in Africa, so it is directly affected," Nuamah said.

A United States diplomatic cable made public by WikiLeaks shows that the US believed, in December 2006, on the eve of the SANDF deployment to the CAR, that France was annoyed by the move.

Said Nuamah: "France has stabilised these countries' currencies and is their biggest trading partner. For the elite, the question is: Who is more likely to protect your interests? France or South Africa? And the answer, for now at least, is France, which helps them more than it should.  They have homes and bank accounts in France. Their children go to school there and they seek medical care there after wrecking the healthcare systems in their own countries."

Although South Africa sells its African agenda as a desire to ensure that countries are run along democratic lines, Nuamah said: "France doesn't really care that much about the quality of democracy in its former colonies."

Nuamah said Francophone Africa might warm to South Africa, "but you still need to give them a reason to switch patrons. And remember, these patronage relationships are not based on national-interest calculations. It's the interests of the elite that shape these relationships. So to come in and say, 'You must switch', South Africa needs to show the elites how it's going to protect their interests."

International relations department spokesperson Clayson Monyela denied there was any friction. "Our relations with France remain cordial. We co-operate well on a multilateral platform and on African issues."

A response from the French embassy had not been received by the time of going to press.