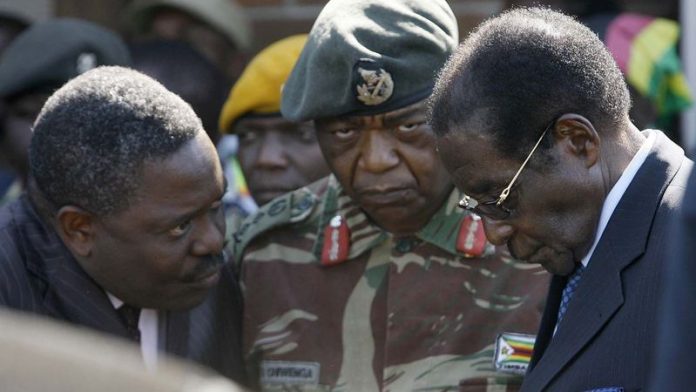 Eddie Cross, a Zimbabwean opposition Movement for Democratic Change (MDC) MP who has proved to be well informed on security matters in the past, told the Mail & Guardian that he had been informed by security sources that the company, Nikuv International Projects, is working on the roll at Defence House, the headquarters of the Zimbabwe Defence Force. The MDC also alleged that Nikuv was a front for the Israeli intelligence agency Mossad, although it offered no evidence to support the claim.

It is unclear what Nikuv’s involvement in this coming election is but it specialises in population registration and election systems.

Cross said the source told him that the company is working under the direction of Daniel Tonde Nhepera, the deputy head of the Zimbabwe’s dreaded internal security arm, the Central Intelligence Organisation (CIO).

Another Zimbabwean intelligence source confirmed to the M&G the allegation that Nikuv is working on the voters’ roll “with the CIO”.

In the run-up to the disputed 2008 elections, Zimbabwean opposition parties accused the company of assisting the Zanu-PF government to manipulate the roll in favour of Robert Mugabe. Suspicions of election-rigging were heightened when Zimbabwe’s electoral commission took five weeks to release the results of the election. The MDC leader, Morgan Tsvangirai, calculated that he had won much more than 50% of the votes in the first round of polling but, when results were eventually published, he was credited with 47.9% against Mugabe’s 43.2%, forcing a run-off.

A campaign of violent intimidation led Tsvangirai to withdraw from the second round, leaving Mugabe in power.

The Israeli embassy in Pretoria took the unusual step of issuing a statement at the time, denying that  Mossad was involved in any way in the elections.

Questionable tenders
But now an amaBhungane investigation has found that top executives of a Nikuv associate company, ISC International Security Consultancy, have an Israeli intelligence background  and Nikuv has been linked to other cases of collaboration with the Zimbabwean security services as well as to questionable tenders in the region.

On its website Nikuv says that the company focuses on projects for “governmental sectors” and initiated its activities in Africa in 1994 in Nigeria. It had “since expanded its activities to Zimbabwe, Zambia, Ghana, Botswana and Angola in IT and additional areas like agriculture and security”.

In Zambia, where Nikuv was brought in to manage and computerise voter registration, the United National Independence Party (Unip) accused the ruling Movement for Multiparty Democracy (MMD) of trying to rig the 1996 election with the company’s help. Unip eventually boycotted the poll.

The Zambian opposition also accused Nikuv of landing the contract without proper tender procedures. The process was allegedly managed by the office of Vice-President Godfrey Miyanda rather than the electoral commission.

The Zambian High Court found that the registration process was flawed but that there was no evidence that a majority was built in for the ruling MMD. Nevertheless, the Nikuv roll was later scrapped.

AmaBhungane understands that Nikuv’s offices in Lesotho were raided in March, apparently in connection with an identity document contract awarded last year in controversial circumstances. It had previously won an open tender to supply passports in Lesotho.

Its first Zimbabwean contract appears to have been a $15-million deal signed in November 1994, reportedly to computerise the ministry of home affairs, the census office and the election system. The deal was backed by the Israel Foreign Trade Risks Insurance Corporation.

Riot control gear
It also appears that individuals linked to Nikuv played a role in helping the Zimbabwe Republic Police (ZRP) obtain riot control equipment and motorbikes, which would have been difficult for the ZRP to access at the time, given international sanctions.

On August 2 2001, Zimbabwe’s Financial Gazette reported that, before the 2002 presidential elections, which the government feared that Mugabe would lose, the ZRP contacted Eli Antebi, who represented a company called Beit Alpha, about the purchase of the vehicles and water cannons.

The amaBhungane investigation established a web of connections between Antebi and Nikuv:

• According to its website, nipprojects.com, Nikuv International Projects Ltd was established in 1994 by Emmanuel Antebi. As far as amaBhungane could  establish, Emmanuel is Eli’s brother.

• A Financial Gazette report of August 9 2007 revealed that the Zimbabwean State Procurement Board had queried the Zimbabwe police’s insistence on purchasing 100 quad bikes through “a Netherlands-registered company, Pedflora”, which operated an account with Credit Suisse in Geneva.

The report said the purchase was eventually approved, despite the ZRP’s failure to explain why it had nominated Pedflora rather than following tender procedures.

AmaBhungane has established that Pedflora was registered in the British Virgin Islands in 2004 and that its the directors were Eli Antebi  and another Israeli citizen, Dror Jackson.

The Nikuv website lists Jackson as the representative of the company's “agro division”.

No online profile
The company website says that Nikuv was formed “by a group of professionals with an accumulated experience of 45 years in the field of population registration and election systems in Israel”, adding that it was initially a subsidiary of the Formula Group, one of Israel’s largest software groups. On its website Nikuv lists offices and numbers in South Africa, Zimbabwe, Angola and Botswana, but the phone numbers for South Africa and Angola are out of date and those in Zimbabwe and Botswana ring unanswered.

AmaBhungane managed to contact the man who appears to be running the company’s project in Zimbabwe, Ron Asher, who has been in the country since 2011. But he refused to disclose anything about the company’s activities in Zimbabwe, declining even to give the physical address of its Harare office. He referred all queries to the Nikuv head office in Israel.

The head office is on the second floor of a large unmarked building of concrete and darkened glass, buried deep in the industrial zone of Herziliya, north of Tel Aviv. It is listed alongside about 10 other companies in the building’s reception area – including Defence Technological Security Ltd – and appears to have a head office staff of about 20.

When a reporter from the Guardian visited it on amaBhungane’s behalf, the receptionist said the entire staff were in a “big meeting” and could not be disturbed.

Nikuv Israel confirmed receiving detailed questions from amaBhungane on March 7, including a question about whether it is working on the Zimbabwean voters’ roll under the direction of the CIO. It had not replied at the time of going to press a month later.

Efforts to get a comment from the registrar general Tobaiwa Mudede were unsuccessful as his phones went unanswered. A woman who answered the phone of Shupikai Mashereni, the spokesperson of the Zimbabwe Electoral Commission, said he was unavailable for comment. – Additional reporting by Thabang Matjama

A company linked to Nikuv – ISC (International Security Consultancy) – has provided services in the past for Johannesburg's OR Tambo International Airport and other South African organisations, Nikuv's website reveals.

AmaBhungane has established that all ISC's founders and senior associates appear to have once served at the highest levels of the Israeli intelligence services.

The president and founder of ISC is Dani Issacharoff. A former colleague, who asked not to be named, said: "Dani was with Mossad – he was very, very senior."

He is also described as a former head of security for Israel's airline El Al and the founder and president of what appears to be ISC's forerunner, a company called International Consultants for Targeted Security.

Minimal involvement in South Africa
The latter, set up in about 1982 by former members of Israel's security agencies, specialised in airline security, particularly the profiling of passengers to identify high-risk individuals. It was pioneered at El Al. By 1989, the company had become controversial.  It was exposed in the Spanish newspaper El País as operating in Spain without the official authorisation required for foreign security companies and using the Spanish-based Hachuel Group as a cover.

ISC, according to its own website, has representatives in Israel, South Africa, Kenya, Italy and Switzerland.

The South African number no longer works, but Issacharoff keeps a half-day secretary at the office of a well-known local security company, Nicholls, Steyn & Associates, and travels to South Africa regularly.

Speaking from Israel, Issacharoff said that ISC currently has minimal involvement in South Africa. It was involved in tracing miners for a class action suit against mining companies for compensation over lung disease.

Issacharoff, who is now 75, said there was no formal relationship with Nikuv: "We just worked on some joint projects together."

He said he had not been involved in Zimbabwe for more than two years, though he declined to say what his last engagement there entailed.  Travel records show Issacharoff has been in Harare at least twice since the beginning of 2013. – Sam Sole

Nikuv's trouble in the mountains

Lesotho's Directorate on Corruption and Economic Offences raided the offices of Nikuv International Projects in Maseru and the Lesotho police questioned its deputy chief executive, according to the country's home affairs minister, Joang Molapo.

The raid, which took place last month, appears to be connected with two contracts awarded to the company – one, for identity smart cards, that was allocated last year without an open tender process.

Molapo said this week that the raid took place "because the ministry found a letter to the ministry from Nikuv saying that the project [which also includes a contract for e-passports] would cost $25-million, but the ministry presented a different figure of $29-million to the Cabinet". The discrepancy sparked suspicion of corruption and prompted the raid, he said.

He confirmed that a Nikuv "consultant", Steven Becker, and the deputy chief executive, Amnon Peer, were taken in for questioning by the police but released the same day. Both appear to have crossed into South Africa since then. Through their South African lawyers, they said they would only return to Lesotho if they were offered immunity from prosecution. Molapo said Lesotho's current coalition government had inherited Nikuv from the administration of the former prime minister Pakalitha Mosisili. "As a government we cannot commit to their conditions because investigations are ongoing. We don't know what the results of the investigations will be," he said.

The controversial smart-card contract is understood to have been signed two months before it received Cabinet approval last year. Lesao Lehohla, the former deputy prime minister and home affairs minister, said he saw nothing wrong with the tender award because Nikuv "was found to be multiskilled and would save money".

"This company will provide us with e-passports as well as IDs, while MCA Lesotho [another company] was focusing only on IDs," Lehohla was quoted as saying.

Retselisitsoe Khetsi, the principal secretary who signed the contract on the government's behalf, declined to talk about Nikuv because he "is out of the civil service at the moment".

Khetsi was placed on indefinite leave after he allegedly failed to explain to Molapo how Nikuv had won the contract. – Thabang Matjama