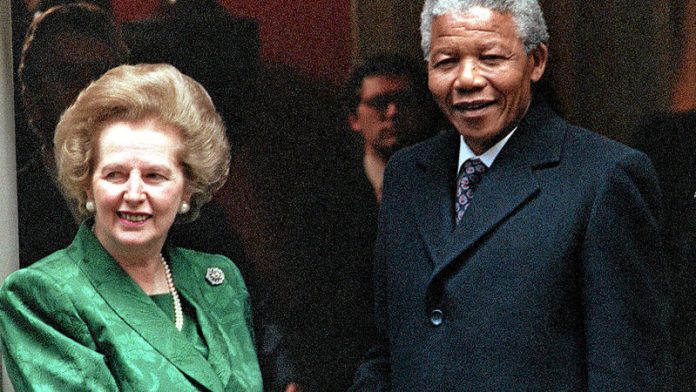 Following the death of ­Margaret Thatcher, much has been made about her relationship with and influence on South Africa during apartheid. Although she made public statements calling the ANC a terrorist organisation at the time, her impact on the country has been much more profound since she left public office in 1991.

Her aggressive pushing of a neoliberal economic policy, alongside Ronald Reagan in the United States, has come to dominate the structure of many economies today. This policy underpins much of South Africa’s macroeconomic policy today.

At the public launch of the growth, employment and redistribution (Gear) policy in 1996, which replaced the more socialist reconstruction and development programme, then-president Thabo Mbeki said: “Just call me a Thatcherite.”

Margaret Thatcher 1925 – 2013: Iron Lady recast as a saint
Raised in the shadow of an absent and famous mother

In his book, Thabo Mbeki and the Battle for the Soul of the ANC, William Gumede said his comment was a dig at the left of the tripartite alliance because it was furious at the launch of the new policy.

Gear was a big departure from the ANC’s previous economic policies and the party’s left wing was sure to reject it. As a result, it was drafted in the strictest secrecy  so that nothing could be done about it until it was too late, Gumede said.

Upon release, it came under heavy attack from the left, and Mbhazima Shilowa, the general secretary of Cosatu at the time, attacked it in a speech at the University of the Western Cape.

Dominating discourse
On the death of Thatcher this week, the ANC released a press statement recognising that she had redefined British politics and public administration. This in turn had a great impact on European politics and governance, said the party’s spokesperson, Jackson Mthembu.

Although it pointed out that she had failed to recognise the ANC, the statement also said that her policies had gone on to “dominate discourse in the public-service structures of the world”. As a result, “long after her passing, her impact will still be felt and her views will be a subject of discussion”.

Peter Hain, an MP in the United Kingdom who hails from South Africa, said the Thatcher era had pushed the ANC towards a more neoliberal worldview.

Dale McKinley, a local political activist, said the policies of Thatcher and Reagan had a big impact on ANC policies after 1994. After backing the apartheid regime, they changed sides in the mid-1980s after they realised it was going to fail. What followed was a conscious campaign to move the movement’s leading luminaries towards embracing their more neoliberal economic outlook.

“This had a collective impact and it was clear by the start of the 1990s that the ANC had decided to move in a far less nationalistic direction as a result,” he said. That included dropping plans for nationalisation and building a state that was much more development-minded.

Subsequent macroeconomic policy was born from this neoliberal understanding of the world. And this has not changed, with Gear the main macroeconomic policy for the economy. Accommodation of more socialist policies has occurred at the sectoral level, with things such as free antiretroviral programmes, he said.

“She had a fundamental impact at policy level and at the level of consciousness,” he said. Alongside Reagan, Thatcher’s defeat of the Soviet empire – framed as a victory for their version of capitalism – taught local political leaders that there was no other way to run an economy, he said.

Aggressively pushed
Economist Iraj Abedian, the lead drafter of Gear, said: “There is no question that Thatcher had an effect on policy in South Africa.” This was because she had dramatically and aggressively pushed her policies and they had gained prominence around the world as a result.

In South Africa, the policy’s most profound impact was in the privatisation of state entities such as Sasol.

“The ideological seeds that she planted had a profound impact and they still do. Her legacy continues,” Abedian said.

Alan Hirsch, of the Graduate School of Development Policy and Practice at the University of Cape Town and an advisor on Gear, said it was the National Party that had most closely followed Thatcher’s policies.

Her impact on the post-1994 policy landscape was more in the effect she had on the thinking of global institutions. “This then had an impact on the kind of advice that was given at the time by these institutions,” he said.

The one error made at the time was in privatising state institutions. Telkom was a case in point: the network should have been liberalised rather than maintained as a monopoly. But this was the general thinking at the time, Hirsch said.

“There was confusion about how to go about privatisation and liberalisation,” he said.

Greater influence on policies such as Gear came from the World Bank and similar global institutions, which created the underlying motivation for structural adjustment of the local economy, he said.