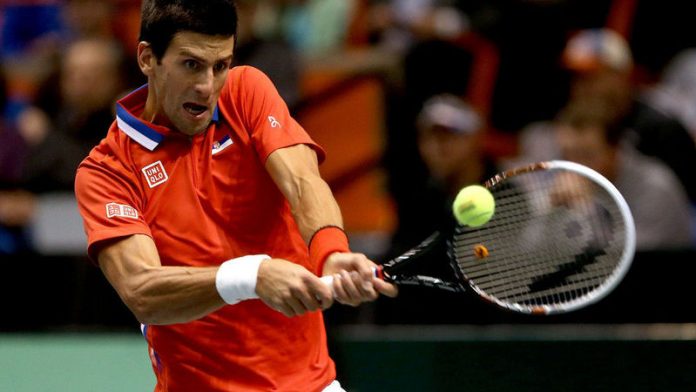 The Serb world number one rolled his right ankle last weekend as he led his nation into the Davis Cup semifinals over the USA, then flew back to his Monte Carlo base for intensive rehab and treatment after a scan showed no ligament damage.

Djokovic takes the top seeding at the most picturesque venue in the sport as he heads the field with number two Murray.

Multiple champion and king of clay Rafael Nadal will be bidding for an unprecedented ninth straight title in the principality where he continually dominates.

The Spaniard ranked fifth and seeded third flew in after a three-week rest in the wake of his Indian Wells title last month, the climax to his comeback to tennis after a seven-month pause for knee injuries.

The 26-year-old was seen off at the airport on his home island of Mallorca on Friday, climbing aboard a private jet for the quick flight to the Mediterranean coast enclave of Monaco. He later got in a hit at the Monte Carlo Country Club venue.

Djokovic's possible mid-week start
"After a tough tour and training, the [left] knee has left me more sore than I would have liked," Nadal told Spanish television. "But in the last few days I am much better, really."

Nadal, seven-time French Open winner, boasts 35-2 record on clay over the past year as he begins the Roland Garros run-up campaign. His dream scenario would be a sixth career sweep of the Monte Carlo, Barcelona, Rome and French Open series.

Out of the event is number 14 Tommy Haas, who provided thrills in Miami a few weeks ago with his semifinal appearance on the eve of his 35th birthday. The absence of the German leaves a place in the field for colourful Latvian Ernests Gulbis.

Top eight seeds all begin with byes, which should give Djokovic a mid-week start an more time to regain his ankle fitness.

Czech Tomas Berdych, who sat out Davis Cup play last week with a shoulder injury, is back and seeded fourth, ahead of Argentinian Juan Martín del Potro, who had originally not been scheduled to play the event.

Whoever emerges as champion on Sunday, it will yet again confirm the dominance of the 'Big Three' of Federer, Djokovic and Nadal
Read more
Advertising