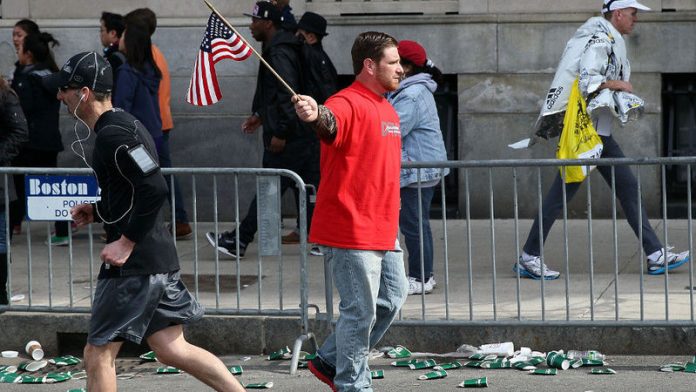 It dawned chilly, clear and blue, a parsimonious but perfect serving of New England springtime that – because it came on the third Monday in April – unquestionably called for a celebration.

The kind of morning just right for an 11.05am first pitch at Fenway Park. A day to remind your kids about the heroes of the American Revolution before heading out to stake a place on the curb and cheer on modern-day heroes of the marathon. A day, Bostonians say, when their city realises the best of itself.

And then, in 10 seconds of fury and smoke, the joy founded upon 117 years of sweat and aspiration was stolen away.

When a pair of bombs exploded on Monday near the finish line of the Boston Marathon, killing at least three people and injuring more than 140, it left a scene of shattered glass and severed limbs that terrorised the city. Spectators who moments before had been cheering family and friends were knocked to the ground. Blood stained the pavement. With reports that two more bombs had been found unexploded, Bostonians and visitors hunkered down in fear.

But to appreciate the totality of what Boston surrendered in those moments of horror requires understanding just how much the city had to lose. Other cities have, no doubt, experienced far more horrific tragedies. But few have had their sense of security ripped away at a moment of such singular exultation, on a day that captures an essential part of this city's soul.

Monday in Boston was Patriots' Day, a holiday unique to New England that brings the region's rich history alive with reenactments recalling the battles of Lexington and Concord that marked the beginning of the American Revolution. For the city's children, it means a day off from school as they begin Spring Break. For 23 000 runners from around the world, the day caps months spent preparing to test body and spirit. It is a day when a city feels like a village, when strangers offer high-fives and free food to runners they'll never see again.

To see all that shattered is a hard feeling to put into words, Bostonians say. But they tried nonetheless, because it felt right to do so.

For Meredith Saillant, the day's transformation was summed up in minutes, just after she finished running the 42km race, when a gathering with friends in a hotel room overlooking the finish line morphed from a party-in-the-making into a search for an escape route.

"I went into the shower laughing, so happy about what this day was all about – and I came out and it was all over," said Saillant, who lives in the Boston suburb of Brookline. "It's just that sense of completely feeling just vulnerable, like something's been taken from us for no reason, for absolutely no reason, and it's just completely senseless."

In an old city that prides itself on its institutions, workers at Boston's hospitals seemed stunned by the shrapnel wounds and ruptured eardrums, as much because of the timing and the place they were inflicted as for their severity.

"This is something I've never seen in my 25 years here," said Alisdair Conn, chief of emergency services at Massachusetts General Hospital. "This amount of carnage in the civilian population, this is what we expect from war."

But the pain and despair was hardly limited to the emergency wards. Instead, it spread across the city, echoing off empty cobblestones.

By evening, SWAT team members with machine guns patrolled hospitals and stood outside hotels that were on lockdown. Most bars had closed early on a night when they're typically packed with post-race revellers.

"Be Safe and be #BostonStrong," read one sign posted on the door of a darkened bar. "We urge everyone to please stay safe," said the sign posted at another.

At the Hill Tavern, across the street from Massachusetts General, people hunched over their beers and stared in shock at the television screens broadcasting news of the explosions. The mood was sombre.

"You don't ever think something like this would happen so close to home, especially in Boston," said 23-year-old Kaitlyn Kloeblen. "You always think it's such a small, safe city."

Kloeben said she was avoiding the subway system and staying close to home for the night. "We don't want to go anywhere on the T or anything," she said. "We don't really feel safe."

Black bars
The mood was equally wan in the promenades around historic Faneuil Hall and Quincy Market that would normally be thronged with post-marathon partiers. Instead, nearly all the bars and restaurants were black, surrendering the streetscape to a few lonely hangers-on, a handful of police officers and a bronze statue of Red Auerbach, the legendary Celtics coach and general manager.

"Today is a very special day. I'm from Boston and I'm devastated," said Laura Gassett, who had brought friends from California, Utah and England to the marathon before seeking solace at Durgin Park, one of just two bars open. "The terrorists are getting exactly what they wanted. They want to shut Boston down and they did. They cut us off right at the knees."

As Gassett and her friends went in search of a cab, a chain across the entrance to Dick's Last Resort – a bar that posts its closing time as "til I freakin' say so!!" – swung in the breeze and an outdoor loudspeaker broadcast the notes of Always and Forever, across the emptiness that was not supposed to be.

"We were sitting in the bar and we saw bomb squads walking by with M-16s, checking trash barrels," said Gassett's partner, Candy Shoemaker. "It was like, 'Oh my God.'"

The disbelief seemed most obvious in the faces and the voices of runners. Many recalled how the day had started off so perfectly with cool, clear skies after last year's stifling heat.

"The runners on the course were happy," said Lucretia Ausse, who was running her first Boston Marathon, "and it was wild going through Wellesley. Just everybody – the spectators were off the hook."

Ausse had just crossed the finish line when she turned around and saw smoke pouring into the sky.

The ultimate accomplishment
The finish line is usually a joyous place in Boston: the ultimate accomplishment in a marathon that's considered among the most difficult in the world to run, owing to its steep hills and competitive qualifying times. But this time, runners surged away from the finish line, anxious to pick up phones that would allow them to reassure their families. Except that none of the calls were going through.

There was anxiety and fear in Boston Common, a historic park just beyond the finish line where runners wrapped in foil blankets usually eagerly reunite with family members.

Instead, people wandered in and out in a confused daze, searching for family and friends who were unreachable. Sirens rang through the air. Helicopters thundered overhead. Runners collapsed on the ground, crying.

"It was mayhem. It was chaotic," said Mike Ferrari (24) who lives in Boston. "Everyone just started running."

By nightfall, nearly all had departed and runner Tara Redmond (42) hurried back to her hotel through eerily quiet streets. On Monday night, after months of training to earn a marathon medal, it felt wrong to wear hers as if there was something to celebrate. The only reason she had it on at all was that her mother had told her she deserved it. But Redmond was no longer sure.

She talked about all her fellow runners who joined Boston's once-a-year chase of excellence and who had been unable to claim their rightful prize. Together, with this city, they had started the day that held such promise, only to see it evaporate.

"It's such a sad day," Redmond said. Then, she glanced down, running her fingers over the medal – the one depicting the unicorn that symbolises a city's search for rarely attainable perfection – and her eyes filled with tears. – Sapa-AP