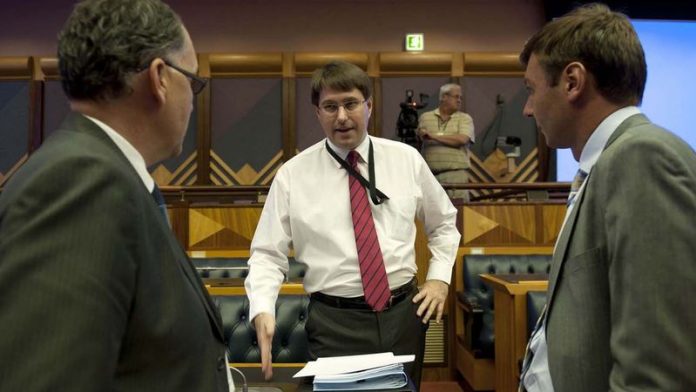 Opposition parties in Parliament are considering legal action against President Jacob Zuma after "an exchange of diplomatic notes" handed to the Democratic Alliance's spokesperson on defence, David Maynier, revealed that Zuma did not give Parliament all the details regarding South African troop deployment to the Central African Republic (CAR).

The notes given to Maynier by Defence and Military Veterans Minister Nosiviwe Mapisa-Nqakula, which were an exchange between South Africa and the CAR, showed that Zuma and Mapisa-Nqakula approved a renewed mandate for the "reinforcement of the South African contingent for self-defence, protection of property and saving of human lives in Bangui" in December.

The information given to Parliament, however, was still the same as in the old memorandum of understanding signed in 2007 that expired in February last year.

The expanded scope for South African National Defence Force (SANDF) personnel was not communicated to Parliament.

Maynier said that if Zuma had provided the real reasons for the extension of the deployment, Parliament could have done its work differently.

Extraordinary summit
This new information came to light as Zuma and Mapisa-Nqakula travelled to the Chadian capital N'Djamena this week to attend the second stage of the extraordinary summit of the Economic Community of Central African States.

At that summit, which assessed progress made on implementing a peace plan agreed upon by the group's heads of state early this month, South Africa sought to assure central African states that its involvement in the CAR was because it has the best interests of Africa at heart.

South Africa was forced to withdraw troops from the CAR last month after 13 SANDF members died during a coup. Seleka rebels, who toppled former president François Bozizé, faced off with SANDF troops in Bangui. The battle raised questions about South Africa's reasons for deploying troops in the mineral-rich but impoverished country.

The leaders in Chad also discussed sending more troops from the regional Multinational Force of Central Africa (Fomac) to help ­to stabilise the country. On the eve of this week's summit, CAR Prime Minister Nicolas Tiangaye asked France and Fomac to help his country re-establish order. Looting, rapes and killings have become a daily occurrence in Bangui since Seleka took over the government.

Despite South Africa's attempts at the first leg of the summit two weeks ago to discourage the use of French troops in troubled African countries, current CAR leaders appear to be comfortable with their former ­colonial master.

Nhanha said, in her quest to shift blame, Mapisa-Nqakula had claimed that Lekota was responsible for signing an agreement that saw South African troops deployed in the CAR.

"But now it's been revealed that the agreement Lekota signed expired in February 2012," said Nhanha. "In fact, for 10 months our troops were occupying foreign land illegally, [as] the exchange of diplomatic notes was only signed in December."

United Democratic Movement leader Bantu Holomisa has called for Mapisa-Nqakula's head, as well as an urgent investigation into the entire CAR deployment.

"We've been lied to all this time by the presidency and the minister," he said. "To her [Mapisa-Nqakula], it's a joke that 13 soldiers died. Even when she went to Parliament she was clueless and unprepared."

Mapisa-Nqakula is expected to give a full account of the CAR deployment during a National Assembly debate on the matter on April 23.

In January, Zuma wrote to Parliament saying the reason for the deployment of South African troops to the CAR was to "assist with capacity building of the CAR defence force and will also assist that country with planning and implementation of the disarmament, demobilisation and re-integration process".