Liverpool’s Rodgers not scared by ghosts of Benitez 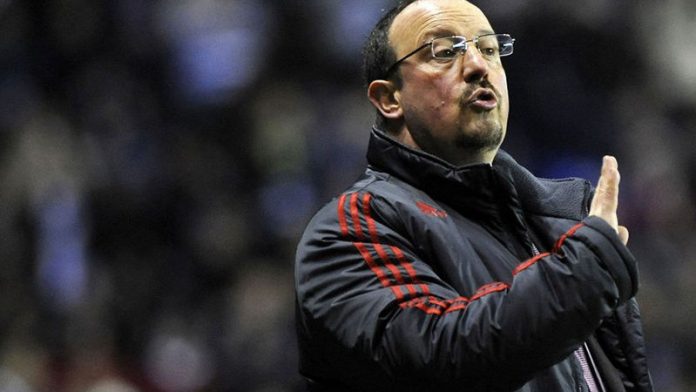 The walls at Anfield and also at Liverpool's Melwood training ground are covered with iconic images of the club's domestic and European triumphs during Benitez's reign.

Chief among them is the Champions League final success in 2005, when Benitez's Liverpool side famously fought back from 3-0 down against AC Milan in Istanbul to win on penalties.

But ahead of the Spaniard's first return to Liverpool since his 2010 departure, Rodgers admitted he is not unsettled trying to match Benitez's achievements.

"They are not intimidating for me," Rodgers said when asked about the pictures of Benitez.

"I said to the players 'your job is to put yourself on the wall here'.

"If I was only worried about myself then maybe having people around with great histories would worry me. But it doesn't one bit.

Great legends
"This club is full of great legends with guys like Alan Kennedy who work on match days, Ian Rush, Jan Molby, John Aldridge, all great guys around the place. That doesn't intimidate me, I enjoy speaking with these people."

Benitez, who also won the FA Cup with Liverpool in 2006 and guided them to another Champions League final defeat against AC Milan a year later, should get a fine reception from his old club's supporters.

However, there is a hint of tension in the relationship between Rodgers and Benitez since the Spaniard, whose family still live on Merseyside, expressed his wish to one day return to Liverpool.

"I don't know Rafael Benitez as a person. I know him as a manager. He is a fantastic manager there's no question about that.

"Rafael Benitez will deserve a great welcome when he comes back. He won the European Cup during his time here, which is a great achievement."

Benitez has found friends hard to come by at Stamford Bridge following his controversial comments about the Blues during his six-year reign at Liverpool.

So it would be little surprise if Liverpool supporters sing his name far more often than their Chelsea counterparts on Sunday.

Benitez's emotional return
Benitez can't afford to be distracted by his emotional return as Chelsea seek the three points that will guarantee the Blues hold onto third place ahead of the remaining five games of the campaign.

Benitez's side showed impressive resilience in recovering from the disappointment of losing the FA Cup semi-final to Manchester City to beat Fulham 3-0 midweek.

But with Arsenal, Tottenham and Everton also contesting for the final two places in next season's Champions League, a slip at Anfield could prove costly to Chelsea's ambitions.

"I will try to do the best for my team and that is Chelsea. I am a professional and that is what I have to do," Benitez said.

"I cannot forget the time I spent there and the feeling, the atmosphere, the success, the link with the fans and the city – it is my home – but I will try to win. That is what I have to do.

"This will be quite emotional but I have to concentrate. It will not be easy when you see so many friends around but I will try to concentrate on the game.

"Normally I am not too emotional but now I'm getting older it happens sometimes."

Benitez's team selection will again come under scrutiny, particularly the decision whether or not to include John Terry, who scored twice at Fulham in midweek but has rarely started two successive game under the Spaniard. – Sapa-AFP

The Premier League returned after three months. Here are the things we learnt over the weekend
Read more
Opinion

Paddy Harper: On life in the time of coronavirus

Between load-shedding and the Covid-19 pandemic, things are bleak. At least I’ve stocked up on cannabis
Read more
Sport

Derby delight for the Red Devils kept them on Chelsea's coattails in the battle for a top-four finish, but it was also a good Sunday for the Blues as they thrashed Everton 4-0.
Read more
Advertising
Continue to the category
Coronavirus