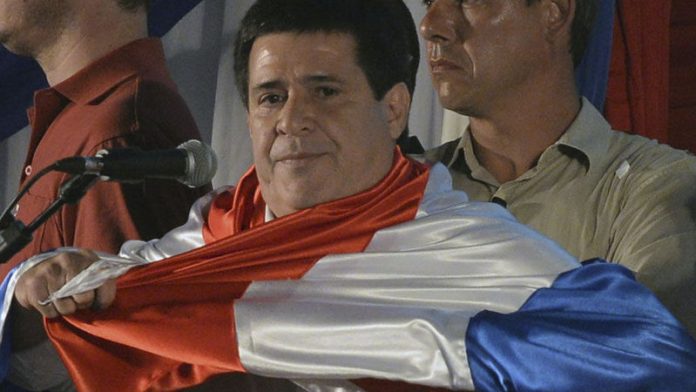 Business magnate Cartes, a politics novice who had never even voted before joining the Colorado Party four years ago, won with 46% of votes on Sunday, nine percentage points ahead of Efrain Alegre of the ruling Liberal Party.

Thousands of Colorado Party supporters wearing red shirts and scarves honked horns and blasted traditional polka music in the capital Asuncion, celebrating their party's return to power after its 60-year reign was interrupted in 2008.

Cartes has vowed to reform the party, which is notorious for corruption. Its long period in power included General Alfredo Stroessner's 1954 to 1989 dictatorship.

"My legs trembled at the thought of the enormous and amazing responsibility of being president of all Paraguayans," Cartes said in his victory speech. "I want the people who did not vote for us to know that I'll put all my effort into earning their trust."

Nearly 40% of Paraguay's 6.6-million people are poor. The landlocked country relies on soy bean and beef exports, but it is also notorious for contraband trade and illicit financing.

Cartes will take office in August for a five-year term. His election bucks the trend in South America where leftists have made steady gains in recent years. Only Colombia and Chile are ruled by conservatives.

Fernando Lugo, a leftist former Roman Catholic bishop, won Paraguay's presidency in 2008 in a vote that inspired hopes of deep reform, but he was impeached last June when the centre-right Liberal Party abandoned his ruling coalition and then took over the reins from him.

Some of Paraguay's neighbours likened the two-day impeachment trial to a coup and imposed diplomatic sanctions on the South American nation.

Paraguayans did not move to defend Lugo. He was seen as largely ineffectual and the Liberal Party was by far the most powerful political force inside his coalition.

But the Liberal Party not only lost the presidency on Sunday – it also did poorly in congressional and state elections, preliminary results showed.

"The big defeat today was for the Liberal Party, they must be asking themselves why they backed the impeachment. The Liberals can't beat the Colorado Party by themselves and today they didn't have the left's votes," said political analyst Alfredo Boccia.

One of Paraguay's wealthiest men, Cartes primarily made his fortune in the financial and tobacco industries. Rivals have tried to link him to drug running and money laundering, but he has never been charged with those crimes and denies any wrongdoing.

Alegre, a more sombre politician, led corruption probes in Congress. But his reputation as an honest administrator was undermined by an investigation into whether he misappropriated state funds while serving as Lugo's public works minister.

Voting on Sunday went smoothly and international observers said they had received no complaints of fraud.

However, two guerrilla attacks were carried out in northern Paraguay. A member of the small, left-wing Paraguayan People's Army was killed in a raid on a police station, and a police officer died after a patrol car was bombed in another area, government officials said.

The group and others fomented land conflicts in recent years and clashes occasionally break out between squatters and big landowners.

Cartes has promised to carry out agrarian reform and he wants to attract up to $2.7-billion in private capital to refurbish Paraguay's airports and build new highways.

Working to mend ties
He said on Sunday that he had already begun working to mend ties in the Mercosur trade group, which suspended Paraguay after Lugo's impeachment and brought in socialist Venezuela even though its inclusion was never approved by Paraguay's Congress.

Cartes has also vowed to put an end to nepotism in the Colorado Party and modernise Paraguay's bloated state bureaucracy, which employs about 10% of all workers.

"His relationship with his own party will be conflictive because one thing is winning [the election] and another thing is calming appetites in an insatiable party," Boccia said. – Reuters