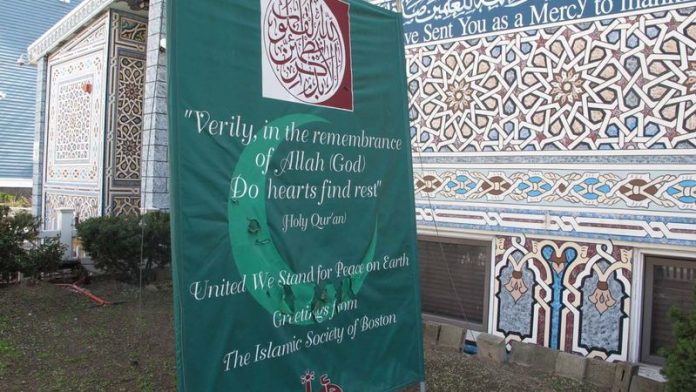 Authorities are still working to piece together a motive for the twin bombings just over a week ago at the Boston marathon that killed three people and wounded 264, as more details emerged about the ethnic Chechen brothers accused of carrying out the attack.

Still hospitalised, 19-year-old Dzhokhar Tsarnaeva has reportedly admitted to being driven by radical Islamic ideas, telling investigators the attacks were motivated by the US wars in Iraq and Afghanistan.

But their fellow congregants in Cambridge, Massachusetts, just across the Charles River from Boston, want the world to know: that ideology didn't come from the local mosque.

The brothers weren't particularly diligent about attending prayer services, community members said, adding that the mosque has an ongoing cooperation with authorities to report any suspicious behaviour.

Older brother Tamerlan Tsarnaeva(26), who was killed during a shootout with police on Friday, began attending prayers intermittently over a year ago, the Cambridge mosque stated in a statement on Tuesday.

The small mosque, called the Islamic Society of Boston, hosts around a hundred worshippers at Friday prayers, and around 20 during the week.

Community activities
Younger brother Dzhokhar was an even rarer participant, director Yusufi Vali added at a press conference, noting that "we just one time saw him with his brother".

Vali directs the larger Islamic Society of Boston Cultural Centre, a mosque attended by around a thousand worshippers, which is affiliated with the Cambridge mosque.

The Tsarnaevs didn't take part in community activities, nor did Tamerlan's wife or their sisters attend the mosque, he told reporters.

On Friday, when community members realised who the suspects were, leaders asked for those who knew them to come forward, Vali said.

"We reached out to the FBI right after we found out that they were folks from here," he explained.

Three congregants were interrogated by the FBI, he added, without giving details.

Although mosque leaders said they had no indication the brothers were planning an attack, they recalled there were signs Tamerlan subscribed to an austere form of Islam.

'Contaminating people's minds'
On November 16, he interrupted a sermon explaining that Muslims could celebrate traditional American holidays such as Indepence Day or Thanksgiving.

Tamerlan stood up and argued such celebrations were not permitted in Islam.

The interruptions were not well received, and on that day in January, fellow worshippers demanded he be quiet or leave. He left.

"He was reacting towards our American Islamic theology," Vali said.

"Clearly there was a difference in viewpoint between what our mosque is about and what his viewpoint was," he said.

After the sermon, community leaders sought out Tamerlan to tell him if he continued interrupting services, he would no longer be welcome – after which, the mosque said, he did not cause any further disturbances.

Diverse and mainstream
Vali emphasised that Tamerlan's outbursts were protected as free speech, and that if either brother had displayed any tendency towards violence, "we would have definitely reported it to the police".

"I've not seen those elements" of an extremist movement in Boston, she said.

"If there are those elements here, they are not located within the mosque."

Vali added: "We meet the FBI monthly through a programme called Bridges" for off-the-record conversations to share any concerns.

"Islam is entirely against violence, preachers of our congregation make that very clear," he emphasised.

"The things these guys did is just absolutely disgraceful," he added, saying he was a Bostonian in mourning.

However, USA Today said on Tuesday in its online edition that members and leaders of the Cambridge mosque have previously been implicated in violent plots.

The newspaper noted, in particular, that the first president of the mosque, Abdulrahman Alamoudi, was sentenced in 2004 to 23 years in a US prison for plotting to assassinate the then Saudi crown prince Abdullah. – AFP