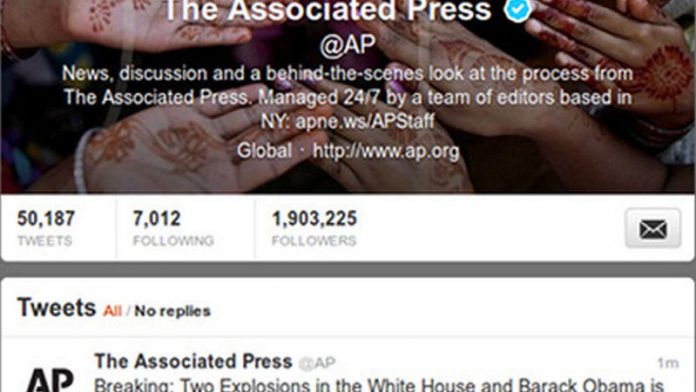 But within three minutes of the tweet's release, virtually all US markets took a plunge on the false news in what one trader described as "pure chaos".

The Federal Bureau of Investigation (FBI) and the US securities and exchange commission (SEC) both said they were probing the incident. FBI spokesperson Jenny Shearer did not provide further details beyond confirming an investigation.

SEC commissioner Daniel Gallagher told Reuters in an interview that the agency was looking into the bogus tweet's impact on the markets.

"I can't tell you exactly what the facts are at this point or what we are looking for, but for sure we want to understand major swings like that, however short it was," Gallagher said.

A group calling itself the Syrian Electronic Army, which is supportive of that country's leader, President Bashar al-Assad, in its two-year civil war, claimed responsibility on its own Twitter feed for the AP hack.

The group has in the past taken credit for similar invasions into Twitter accounts of National Public Radio, BBC, CBS's 60 Minutes programme and Reuters News.

At a time when cybersecurity and hacking have become top national security concerns, Twitter and its reach to hundreds of millions of users is coming under growing scrutiny for the risk of privacy breaches on the site.

Stewart Baker, a cybersecurity lawyer at Steptoe & Johnson in Washington, said there was plenty of blame to spread around regarding Tuesday's incident.

Twitter security
"AP should have had better passwords, Twitter should have gone to at least optional two-factor authentication months ago, and guys on the street really should be thinking twice before they trade on Twitter reports. That's risky," he said.

For years, security experts have called on Twitter to introduce a two-factor authentication measure, which requires a two-step process to log in and which they say would greatly reduce such breaches.

In recent months, the San Francisco-based company hired security experts and posted job listings for software engineers, who could help the company roll out two-factor authentication.

AP, whose Twitter accounts @AP and @AP_Mobile were suspended, reported that hackers made repeated attacks before Tuesday's incident to steal the passwords of AP journalists.

The false "BREAKING" tweet, which went out to the AP's nearly two-million Twitter followers, sent the S&P 500 and Dow Jones Industrial Average falling sharply before they recovered. Stock and bond futures also were affected.

"It's a new low in the capital market sales and trading and investor community," said Russ Certo, managing director in fixed income at Brean Capital in New York.

'Easily manipulated by false information'
Several US lawmakers with influence over US policy on trading have pledged to bring new scrutiny to the practice of high-frequency trading and its power to disrupt markets.

"It is disturbing that the markets were so easily manipulated by false information," Democratic Senator Jack Reed from Rhode Island who sits on the Banking Committee, said on Tuesday. "Congress and regulators, particularly the SEC, should closely examine this case and social media policies to try to prevent this from recurring."

"You have to wonder [about] this system we've built based on technology and speed," said Joe Saluzzi, co-manager of trading at Themis Trading in Chatham, New Jersey.

"The SEC's mission is to protect the individual investor. And they don't feel protected today," he said. "Events like today shatter confidence, and the problem is you don't get confidence back tomorrow."

On Tuesday, spokesperson Sabrina Briefel said the fake tweet appeared on the Bloomberg terminal. She said the company was not reconsidering its decision to include tweets. – Reuters

OPINION| Have you been hacked?