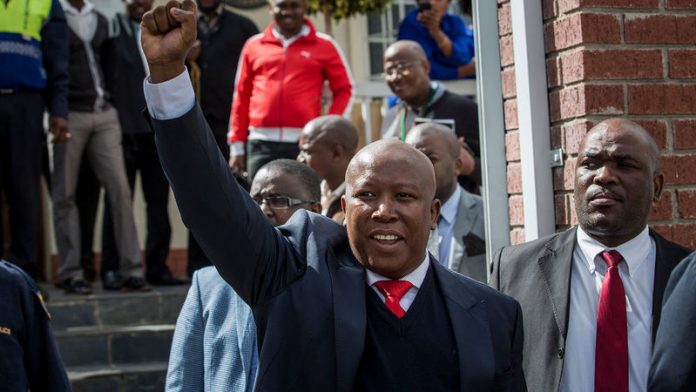 Julius Malema offered no words; just a raised clenched fist and a smile to his supporters who gathered outside the Polokwane Magistrate's Court after his corruption trial was postponed on Tuesday.

Dressed in a dapper navy blue suit and red tie, the former ANC Youth League leader was whisked off in a silver Jeep with the crowd cheering his name in the background.

"We support Julius Malema like we supported Nelson Mandela. He is being persecuted and will be our future president," Abner Maahlo said through a police barricade on Landross Mare Street.

"I don't care if any of the things they are saying is true. Juju will change this country for the better."

Maahlo was one of approximately 100 supporters outside the magistrate's court supporting the controversial politician who is loved and hated in equal measure.

Once the ANC's untouchable golden boy, Malema is now ostracised by the organisation he forged a bond with from the tender age of 10.

Sympathy
Facing multiple charges of fraud, corruption and racketeering – along with a R16-million tax bill – his political and social influence in South Africa has waned in recent months. A pariah to the ruling elite within the ANC, he found a level of sympathy and camaraderie among the disillusioned youth of the ruling party. But is this still the case?

Although the gathering of his supporters has dwindled from the masses that gathered for Malema's first appearance in September last year, the contentious youth figure still commands visible support that could rival any South African politician.

If their preparations are to be considered, the South African Police Services (SAPS) expected a crowd of at least 1 000 on Tuesday.

All access roads to the court were blocked by mounds of razor wire that snaked around three Nyala-armoured personnel carriers. About 50 officers were stationed inside and outside the court.

"We are not many here but the people still love him. We want him to lead us," Maahlo added, dressed in a T-shirt emblazoned with Malema's face and the words "economic freedom fighter".

It is similar to the shirt Malema wore during his march for economic freedom in October 2011, which had Chris Hani's face on it instead of his on the day he led thousands youth to the Union Buildings to demand job opportunities.

'I feel sorry for him'
As police rolled back the masses of barbed wire, a short drive to nearby Seshego – Malema's hometown – revealed there were also those who felt less inclined to be in the firing line for him.

"I think that guy talks too much but I feel sorry for him," Xolani Masawane, a 34-year-old cobbler, said from under his makeshift workshop on a dusty pavement.

Sanding down the soles of a newly reworked pair of leather loafers, Masawane said he was not sure if Malema did something illegal, but knows he was a good leader.

"Why did they have to ruin him? Now there is no leader for the youth," he said.

"Without the ANC, Malema is like me – he's nothing. I like him but if he's done crime he must go to jail – no one is above the law."

'Malema is finished'
A short trip to Phepa's tavern on Nelson Mandela Drive exposed more hardened attitudes towards the man who once vowed to kill for President Jacob Zuma – now his sworn enemy.

"Malema is finished. He has no power left – he's out of the ANC," said George Seema, a local carpenter, over his quart of Black Label.

Seema said he was never a Malema fan, adding he did not know why Malema was not charged with fraud and corruption while still a part of the ruling party.

"He can't even start from the beginning – he's finished. He's already tried to rally support but he failed."

In spite of Seema calling time on Malema's political career, a five-minute drive to Lehlalerwa Street tells a different story.

"Julius Malema is not finished. He can still do lots of things in South African politics," said Kulanga Mpangela, who lives a few houses down from Malema's grandmother's house.

"He was against Mr Showerman so he [President Jacob Zuma] chucked him away. Look at this place: it's not like Nkandla."

'Living good'
The informal settlements scattered along the dusty roads of Seshego are a stark reminder of the struggles many residents still face living there.

But Sarah Malema's house looks out of place. With its high walls and luxurious finishings, the double storey facebrick home is nothing like its modest single storey neighbours.

"He's living good and enjoying the time he is getting to spend with his family – there are no more headaches," an unidentified man claiming to be a bodyguard said after we asked for Malema at the house's entrance.

But Mpangela, in between asking for R100 to "tell the full story", conceded: "He still throws parties but they aren't as fancy as they used to be."

Man of the people
Hailed by many as a man of the people during his political heyday, Mpangela admitted Malema has not done much for the community since his expulsion from the ANC was finalised in April 2012.

He was found guilty of bringing the ruling party into disrepute after unfavourably comparing the leadership of Zuma with former president Thabo Mbeki.

"The majority still like him and if he started another party they would join him the same as I would join. We will always be there for him."

The steadfast determination and undying love of his supporters was certainly evident during the tense standoff between police and Malema supporters at the beginning of his ANC disciplinary hearing in August 2011.

Hundreds of Malema fans were bussed in from across the country and held a midnight vigil in their leader's honour.

They hurled rocks at journalists and SAPS officers on the morning his hearing began and were only placated once Malema addressed them later in the day.

Archenemy
To think this part of Seshego is strictly a Malema stronghold would be false though. Just two streets away we find his archenemy: Boy Mamabolo.

Mamabolo allegedly threatened to exhume the remains of Malema's mother – Mahlodi Malema – from her grave and throw them in front of his grandmother's house in Seshego.

This was apparently in retaliation for Malema allegedly sending some of his allies to sleep with Mamabolo's girlfriend.

"He never really had support in Seshego. It's easy to buy people with beers and cigarettes in this place," Mamabolo said while sipping on a Heineken.

But Mamabolo – who claims "to be cooked from the same pot" as Malema after attending Mohlakeng high school and Mpongele primary school with him – does not say that his former friend is finished politically.

Love for the ANC
Mamabolo said Malema was quietly hatching a plan to return to the ANC by building up money to try and buy delegates at the 2017 ANC elective conference.

"Malema will never start a party because he loves the ANC. He still canvasses votes for the party in by-elections and hopes he can return to us," Mamabolo said with a wry smile.

"Besides, he's still in charge of [Limpopo Premier] Cassel [Mathale], all of the Limpopo MECs and all the local mayors in and around Polokwane. They are all ANC so he's still got power in the ANC."

The central government assumed control of the province's finances and the departments of education, transport, health and public works

At the time, Finance Minister Pravin Gordhan said all the departments taken over would be investigated for "corruption and maladministration".

Punishing Malema
But it was quickly speculated that the move was politically motivated and instigated by Zuma to punish Malema and his allies.

Outside Seshego Hospital, a common hostility towards the media underpinned the views of some of Malema's supporters.

"Why do you come here for Julius? Leave Juju alone, voetsek!" a group of elderly ladies shouted at us.

"He's broken because you broke him! He's a good boy! He looks after his people and we will support him forever!"

Malesela Legodi – a local nurse – stopped his car after witnessing the tongue lashing.

"These people think this guy is a superhero but he isn't. There are no pills in there and no equipment because of his tender nonsense," Legodi said pointing at the hospital and shaking his head.

In October last year the Mail & Guardian reported how a R1.7-billion school feeding programme in Limpopo was allegedly rigged by Malema to favour people close to him.

Only human
Legodi's disgust is quickly met with compassion by 23-year-old Tshokologo Nyaka.

"He took people's money but he's only human – he is a victim of temptation," Nyaka said.

"I hope he can pay this money back and return to lead us. He's brave and he talks the truth."

In spite of Nyaka and Legodi's opposing views, they smile at each other and go their separate ways.

Back at Phepha's tavern, where many Seshego locals end their day with games of pool and some drinks, a solemn figure, who asked not to be named, spoke to us. "The people who love him don't know what he's done because they are blind. His actions did not only hurt the ANC only, it ruined people's lives – especially mine."

As a construction business owner, the man claimed he has no work because of his lack of political connections with Malema. As a result he was in R1-million debt and laid off all of his 20 employees.

"I don't want to give my name because he'll ruin me more. He still has power and if I don't end up dead, I will never get business again," he said with his eyes glossing over.

"I'd rather be polishing boots for a white man under apartheid than where I am now. He deserves what is happening to him now – everyone knows he's guilty."

From Brits to Beijing, people are going crazy for Makhadzi’s smash hit which was born from a DJ Call Me beat
Read more
Advertising
Continue to the category
Africa