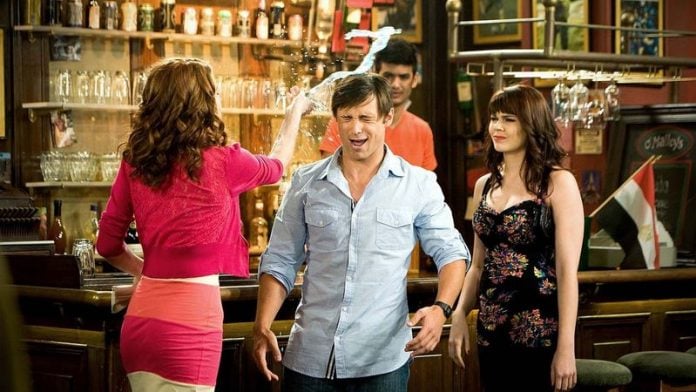 As soaps go, 7de Laan is pretty gentle. Night after night, the ­programme deals with murder, betrayal, corruption, lies, disasters, sex – lots of off-screen sex, although not yet, if ever, gay sex – and even, from time to time, assassinations. But none of it takes the breath away, whether it is the programme's resident baddie arranging to have her brother knocked off or the resident nutter trying to set fire to the woman he loves.

The programme has created a small town out of a few blocks of what is presumably Melville.

At the centre is The Heights, a block of flats above a neighbourhood restaurant and a dress shop. Down the road, there is a sports shop and small gym. In the area, there are a few pubs; a deli that stocks, inter alia, caviar; a palatial home that seems to have zero security, as people just turn up in the lounge without buzzing at the gate; a small supermarket; a bookshop owned by a famous author; an old-age home; a community newspaper; and so on.

It is a beautiful world, where people of all races mingle without a ­racist thought in their heads – there was even an interracial marriage a few months ago, with little fanfare, just relief that the couple had finally got it together.

I watch 7de Laan to see what an ideal South Africa looks like, and I love it because it is not in English. I prefer films and television programmes in languages I do not understand and, unless I read the English subtitles, I have no idea what anyone in 7de Laan is saying, beyond "Ek is mal vir jou" – there are a lot of people being mad about one another; and "Ek belowe" – which generally means there is a promise that is about to be broken.

It is currently the country's ­favourite. At last month's South African Film and Television Awards, it won in the category "best TV soap (public vote)" over some serious competition, including Generations and Rhythm City.

For students struggling to pass Afrikaans, 7de Laan is very helpful. Which is why its attitude to women is a real problem.

'Just a soap'
Here is a sampling of plotlines: the beautiful Bonita, who can arrange flowers like nobody's business, ­cancels a huge contract. The reason: her dof husband sees her having coffee with the client and thinks she is having an affair with him.

The equally beautiful Annelie, a budding fashion designer, turns down an offer that will launch her career because her boyfriend grumbles that he does not see enough of her as it is. He ends the relationship anyway; he says her career seems more important to her than he is. Fortunately, after she promises to "give up everything" he is too stubborn to take her back, leaving her to bite back her tears and accept the offer.

That is bad enough, but it gets worse: women with careers are not allowed to have babies. Either they miscarry, or the baby dies.

In the years I have been watching, there have been three such ­tragedies. Vanessa's baby, the product of a one-night stand, died as a toddler. She is an events organiser now and not ­surprisingly, childless. Isabelle, a jewellery designer, had to have an abortion to save her life. And just recently, the unborn child of Paula, a journalist, died as a direct consequence of her work – an automobile accident on the way back from ­delivering page designs.

The only person allowed to have a live baby is Emma, who does not take her work seriously and does much of it at home so she can be with her baba. Here is the role this lovely young actress is crammed into: asked to choose between a pub lunch with entertainment, a wine tasting, or an afternoon of bingo, she goes for … bingo.

Irritated
After Paula's baby was killed off, I was so irritated as an ordinary viewer, not as a journalist, that I wrote to the people who produce this soap and asked whether these plot lines had come out of focus groups or polls. There has not yet been a response.

Okay, it is just a soap. I watch it because soaps should divide the working day from the slothful night, and at 6.30pm, 7de Laan performs that function. Nobody forces me to tune into SABC2 before dinner ­several times a week.

But many young people watch it so that they can learn enough Afrikaans to pass matric. For them, it is essential viewing.

So why, one wonders, are the people who write it putting into the heads of teenagers and young women the notion that, if they plan to have a career, they can forget about ever having a child? On 7de Laan, women have to choose one or the other. If they try to have both, the baby will die.

Not, I am afraid, the ideal South Africa after all.

The irreverence of Shaleen Surtie-Richards

​Afrikaans soapie Suidooster speaks to us in a refreshingly familiar tongue