Culinary software amid the hardware 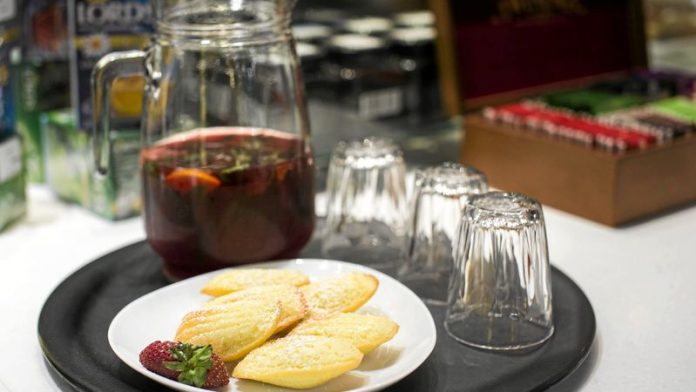 But this was not Paris; the meeting took place in one of culinary Jo’burg’s best-kept secrets — a sliver of a coffee bar on the edge of an exclusive kitchen-products store in the Hyde Park Corner shopping mall.

On further acquaintance with the unassuming café, which, incidentally, serves one of the best cappuccinos in the city, I discovered many other confectionary delights along with the woman responsible for creating most of them. She does not, however, bake the madeleines, which are supplied by the Lanseria headquarters of Culinary.

In a space on the shop floor that cannot remotely be called a kitchen, store manager Sue Ellis, between attending to customers interested in kitchen hardware and gadgets and doing manager-type things, nonchalantly whips up a range of spectacular baked goodies. “It is,” she admits, “a challenge. I basically cook out of a cupboard.”

Walk into the store and you are likely to be greeted by a wondrous fragrance wafting from the hi-tech demo oven. It could be coming from a berry and almond tart or aromatic parmesan and herb scones, a picture-perfect carrot cake, apple and cinnamon muffins or biscotti flavoured with spices and orange peel.

An important side line is sinfully rich ice cream made from the freshest of ingredients. The strawberry is a burst of luscious berries and cream and, for those with a taste for the exotic, there is ginger, saffron and nutmeg. Fresh raspberry and melon sorbet is another favourite with the rapidly growing coterie of regulars.

Ellis is driven by a lifelong passion for food and at one point had a library of more than 1 500 recipe books. But it was not until she “ran away to the bush”, met her husband-to-be and the couple were given a camp to run in Botswana that she turned her passion into her profession. For 11 years, she managed lodges, frequently also doing the cooking. Once back in the city, she opened a coffee shop in Bryanston. Asked to take over the Hyde Park branch of Culinary, she has rapidly put her personal stamp on it.

“The more I bake, the more demand there is,” she says.

The France of the Indian Ocean: Everyone belongs on Reunion Island